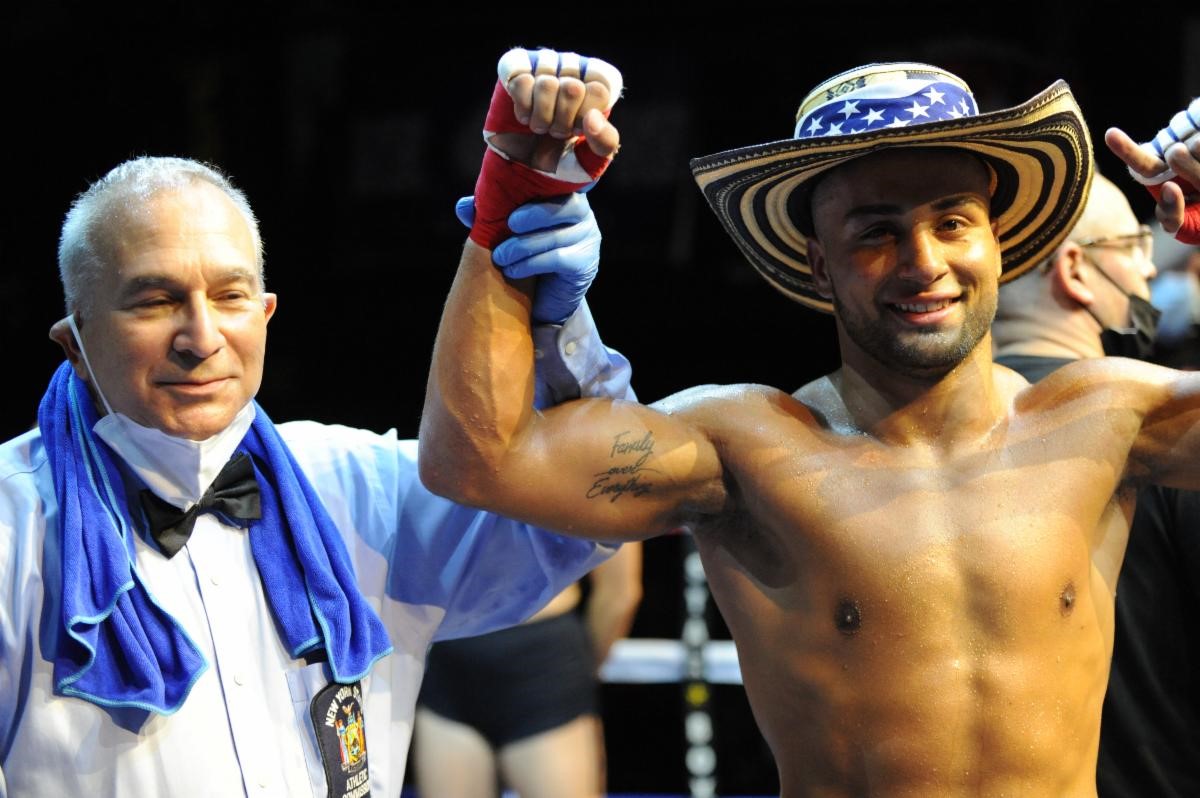 Long Island, New York (September 5, 2021) – It was a long 19-month COVID hiatus, but Star Boxing’s “Rockin’ Fights” series came back with a roar last night at the Paramount in Huntington, Long Island. The packed house was rowdy and ready for boxing’s return to Long Island from the opening bell of the evening.

Bellport, Long Island’s undefeated super lightweight Alex “El Toro” Vargas (11-0 4KO’s) was thrust into prime time role as his fight against Colombian, Alejandro Munera (6-3-4 5KO’s) was elevated to the main event, when the Seldin-Vazquez fight was called off due to Vazquez failing a medical. Vargas did not let the bright lights scare him as he dominated the fight from the first punch. The crowd, filled with purple “El Toro” t-shirts, was loud and proud, chanting for Vargas.

Vargas displayed excellent boxing skill, putting together combinations, and keeping Munera on his heels. In the middle rounds Vargas began sitting on his punches, causing a cut over the nose of Munera. Munera was game, standing tall, taking Vargas’ punishment and attempting to return the favor. Unfortunately for Munera, his bravery would not be enough, as Vargas dominated the fight, winning by a shutout unanimous decision (60-54 x3). Vargas improved to 11-0.

On the undercard, NY firefighter, Louis Maietta (Bronx, NY) and Perez Aughtry (Buffalo, NY 0-2) battled it out over 4-Rounds in their light heavyweight tilt. Both Maietta and Aughtry came out slugging and did not stop until the final bell. Maietta-Aughtry had the fans on their feet the entirety of the fight. At the close of the bout, the judges scored the bout a majority draw. Post-fight, Maietta and Aughtry exchanged words that spilled onto social media. Both seem to be on a collision course for a rematch.

Boca Raton’s, Miranda “She Hulk” Barber (2-2) took it right to Ayanna Tramont (Buffalo 1-1 1KO) mauling her way inside, and dropping Tramont two times before the referee stopped the fight right after the bell sounded to signify the end of the first round. Barber improved to 2-2.

Star Boxing Boss, Joe DeGuardia had this to say about the return of Rockin’ Fights, “This was a fight night we had been looking forward to for so long, and couldn’t be happier that it finally came. It was great to fill the Paramount with fans who had been in much need of an entertaining night out, capped off by a dominating win from Alex Vargas. Another Rockin’ Fights is in the books and we look forward to being back at the Paramount on November 11.”