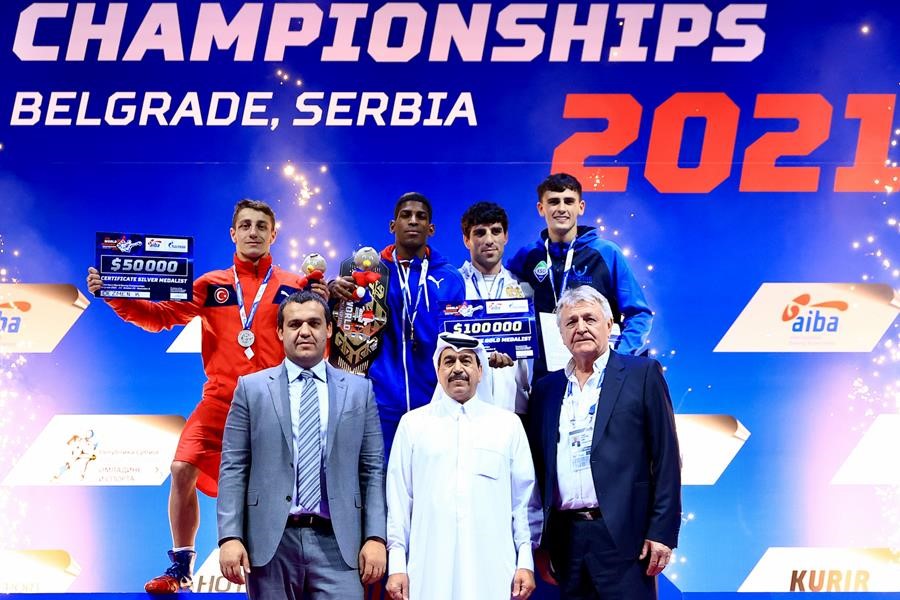 “You have shown us strength, but you have also shown us so much more: patience, respect, friendship and courage. Those attributes are pillars of our daily lives, not just in boxing. Participants of these Championships became an example to all of us”, AIBA President Umar Kremlev said.

Athletes from the AIBA Fair Chance team were honoured as winners of the AIBA Fair Play Moment 2021, with the award being given by Gabor Deregan of the International Fair Play Committee. “Fair play comes in many forms in relation to sport. It might be a moment of respect, or friendship,” said Deregan. “And in this case, it was a moment of equality and inclusiveness. It was a moment where special efforts were made to ensure the presence of athletes who faced considerable difficulties just in attending the AIBA World Championships. The boxers then rose to the occasion with their performances.”

“For every boxer, talent and training are required to reach the AIBA World Championships, meaning that they have won just by stepping into the ring at the start of the tournament,” said AIBA Secretary General Istvan Kovacs. “For the members of the AIBA Fair Chance Team, their personal circumstances meant they had to fight even harder to achieve this win and I am very happy to see them being honoured in this way with the support of the International Fair Play Committee.”

Following the final medal ceremony, one of the most important trophies in boxing history – the Val Barker trophy – was awarded to the best boxer of the Championships determined by AIBA officials. Named after the British champion, pioneering international boxing leader Valentine Barker, the trophy was first awarded in 1936 and is being attributed exceptionally this year to World Championships boxer. This year’s winner is Andy Cruz Gomez from Cuba in a light welterweight (63.5kg) for outstanding performances that transcended the weight classes.

“In order to succeed, every boxer must focus on the present moment during their bouts. But for a whole sport to succeed, it must cherish its connection to the past while working hard to achieve a bold vision for the future,” continued President Kremlev. “The legendary Val Barker trophy is where AIBA brings all of these things together. It was our immense privilege to award it to Andy Cruz Gomez, as our sport wrote a worthy new chapter in our proud history.”

List of all winners of the AIBA World Boxing Championships is available here: https://www.aiba.org/wp-content/uploads/2021/11/C93.pd