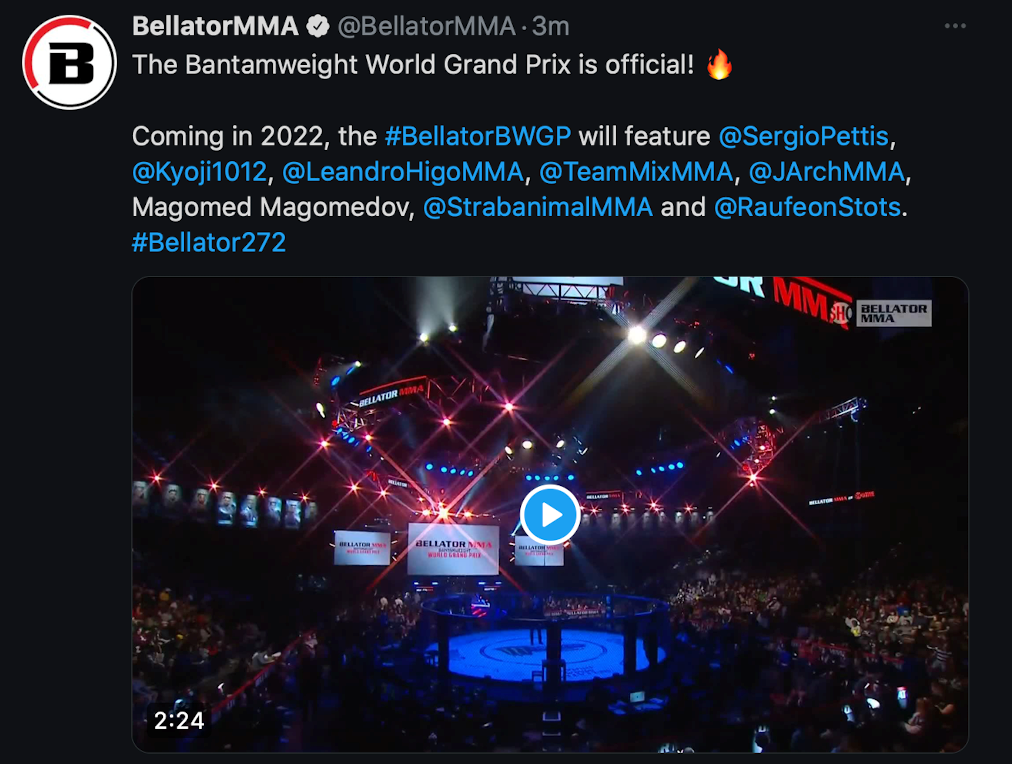 LOS ANGELES – It was officially announced at tonight’s BELLATOR 272: Pettis vs. Horiguchi event that next year’s prestigious BELLATOR World Grand Prix will take place in the promotion’s incredibly stacked bantamweight division. The winner of tonight’s 135-Pound World Championship fight between Sergio Pettis and Kyoji Horiguchi will defend their title next year in the Bantamweight World Grand Prix featuring a gauntlet of the eight best athletes the weight class has to offer.

In addition to both Pettis and Horiguchi, the Bantamweight World Grand Prix is set to feature former divisional champion Juan Archuleta, No. 2 ranked-Raufeon Stots, No. 3 ranked-Patchy Mix, No. 4 ranked-Magomed Magomedov, No. 5 ranked-Leandro Higo, and No. 6 ranked-James Gallagher, who will all vie for the right to be named the next BELLATOR Bantamweight World Champion and take home a grand prize of one-million-dollars.

First-round matchups and additional details such as dates, locations and tournament alternates will be revealed soon.

All tournament bouts will be five-round contests and will be telecast in the United States exclusively on SHOWTIME.

Fighting out of Milwaukee, Wisc., Sergio Pettis captured the BELLATOR bantamweight crown in May 2021 by outpointing former champion Juan Archuleta in a fast-paced contest at BELLATOR 258. During a nearly six-year, 14-fight UFC stint, the Roufusport-product competed in both the flyweight and bantamweight classes, collecting nine victories and a pair of “Fight of the Night” honors against Alex Caceres and Matt Hobar in 2014. Prior to his UFC tenure, Pettis, the younger brother of former UFC lightweight champion Anthony Pettis, earned world titles in Resurrection Fighting Alliance’s flyweight division and North American Fighting Championship’s 135-pound class. Following a trio of impressive triumphs over some of the division’s elite, BELLATOR’s bantamweight champion is set to protect his belt and an unblemished 3-0 promotional mark entering the tournament.

Hailing from Takasaki, Japan, the 31-year-old Kyoji Horiguchi is the reigning RIZIN bantamweight champion who notoriously became a simultaneous, two-promotion champion in 2019 after taking down and upsetting then-BELLATOR champion Darrion Caldwell at Madison Square Garden. Unfortunately, an injury would force Horiguchi to relinquish his BELLATOR title in 2019, and he now looks to reclaim his belt in a main event clash with current champion Sergio Pettis at BELLATOR 272. While with RIZIN, the American Top Team-product amassed an impressive 10-1 promotional mark, highlighted by eight finishes and five first-round knockouts. Additionally, more than half of Horiguchi’s career victories have come via knockout. Now, after reclaiming his RIZIN bantamweight strap and avenging only his third loss in 32 outings with a highlight-reel, opening-round knockout over Kai Asakura on New Year’s Eve 2020, the Japanese sensation fighting out of Coconut Creek, Fla., aims to get his hands back on BELLATOR’s title

With the Bantamweight World Grand Prix set, former BELLATOR World Champion and No. 1-ranked Juan Archuleta sees a clear path toward regaining the 135-pound crown. Armed with 25 professional victories, including 12 by way of K.O. or submission, the “Spaniard” has no issues stopping opponents inside the BELLATOR cage. The former four-division King of the Cage world champion, who holds victories over Patchy Mix, Henry Corrales, and Ricky Bandejas, strives to keep that trend going throughout the Grand Prix.

Considered one of the world’s best 135-pound fighters, Raufeon “Supa” Stots has been in the title conversation since his 2019 BELLATOR debut. Currently riding a nine-fight winning streak, the No. 2-ranked bantamweight has defeated some of BELLATOR’s finest, including Magomed Magomedov and Josh Hill, by smothering opponents with top-tier grappling ability. Sporting a near-perfect 17-1 record, the Roufusport product and two-time NCAA Division II Champion now has an opportunity to compete for a long-awaited crown.

Set to make his sixth promotional appearance under the BELLATOR umbrella, the pride of Angola, N.Y., has collected two-first round submission victories while compiling a 4-1 record with the Scott Coker-led promotion. The 28-year-old Buffalo, N.Y. native looks to build off his most recent win at BELLATOR 270 over James Gallagher in his opponent’s hometown of Dublin, Ireland, last month. Prior to his time with BELLATOR, Mix dominated the competition while on the regional scene by collecting nine of his 15 professional victories, including five first-round finishes. Now, the submission specialist will face the toughest challenge of his career, a shot at the tournament’s $1 million prize and BELLATOR’s 135-pound strap.

After capturing belts in different organizations, Dagestani phenom Magomed Magomedov hopes to add to his collection by taking home BELLATOR gold. Amassing an impressive 18-2 career record with 12 via finish, “Tiger” has made a swift impact on the BELLATOR 135-pound division since his December 2020 promotional debut by climbing to No. 4 in the rankings. Possessing both a blistering pace and superior grappling, Magomedov has the potential to be a nightmare matchup for anyone in the BELLATOR Bantamweight World Grand Prix.

After dropping in weight to 135-pounds, Leandro Higo has been on a tear by winning three consecutive fights and putting the entire bantamweight division on notice. Under the tutelage of the famed Pitbull Brothers camp, the Brazilian is coming off a hard-fought, split-decision victory over former Bantamweight World Champion Darrion Caldwellat BELLATOR 259 in May 2021. As 12 of Higo’s 21 pro victories have come by submission, the entire bracket knows that the No. 5-ranked bantamweight will not be an easy out.

Hailing from Strabane, Ireland, one of MMA’s brightest young fighters strives to notch his 12th career victory in a tournament stacked with 135-pound talent. Following a finish over Anthony Taylor at BELLATOR 169 in December 2016 and a pair of first-round submissions the following year, “The Strabanimal” has tallied four victories over his past six contests, including three first-round finishes and a highlight reel 35-second win at BELLATOR 227. Poised for the biggest test of his young career, the former SBG Ireland-product aims to shed the shadow of former training partner, Conor McGregor, and add to his own legacy with a shot at BELLATOR bantamweight gold.