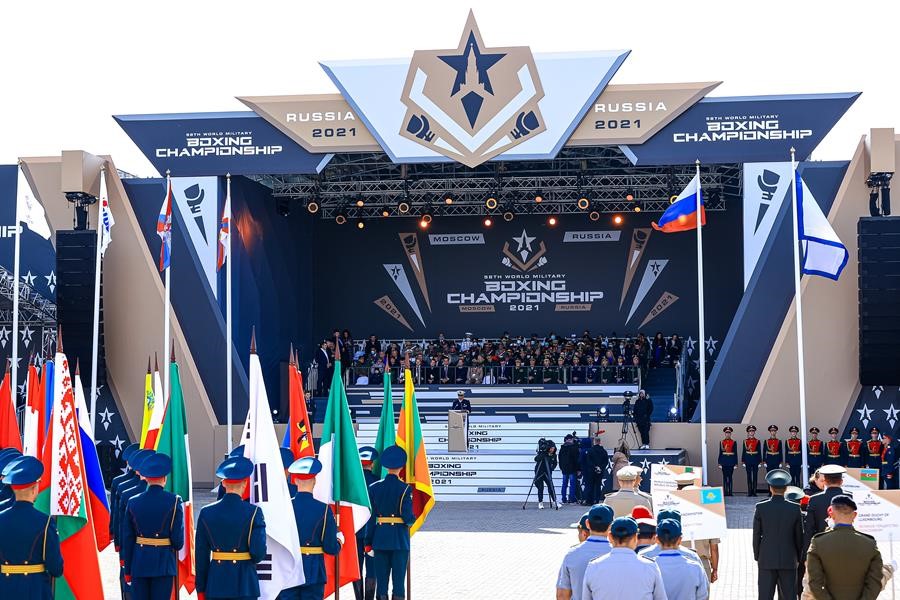 (September 18, 2021) – The opening ceremony of the 58th World Military Boxing Championships was held at the Patriot Exhibition and Convention Center in Moscow. In total, 231 boxers from 36 countries in ten weight categories for men and five for women will perform at the Moscow tournament, 216 fights will be conducted.

A ceremonial column of the aerobatic team of the Samara branch of CSKA appeared in the sky with a solemn passage over Zhukov Square on the legendary Mi-2 helicopters with the flags of the Russian Federation, the International Council of Military Sports and the Central Sports Club of the Army. The aerobatic team includes recognized leaders of the world helicopter sport, absolute world champions, absolute champions of the World Air Games.

AIBA President Umar Kremlev said in his welcoming speech: ‘Servicemen are patriots of their countries. I am very glad that the military people not only defend their country, but also represent it in the ring. Our favorite sport, boxing is one of the best sports. And I am glad that he is developing among the military personnel. From AIBA’s side, we will provide all kinds of assistance to make this World Military Championships even better and brighter, we will create all the necessary conditions for athletes and coaches. I would like to thank the president of CISM for his contribution to the development of boxing. Thanks to all the countries that came and supported this competition. Special thanks to the Ministry of Defense of the Russian Federation for their support for organization of the tournament. Let all conflicts be resolved in the ring’

Olympic champion Alexander Lebzyak: “I am happy to be present at the opening of the most important sporting event in the world, which is taking place in our large, fighting family. I am proud that the 58th World Military Boxing Championships is being held for the first time in my homeland – in Moscow. I would like to wish all the participants of the competition interesting fights and may the strongest win.”

The fights will start on the 19th of September. The finals will take place at the Lev Yashin VTB Arena on September 25th.