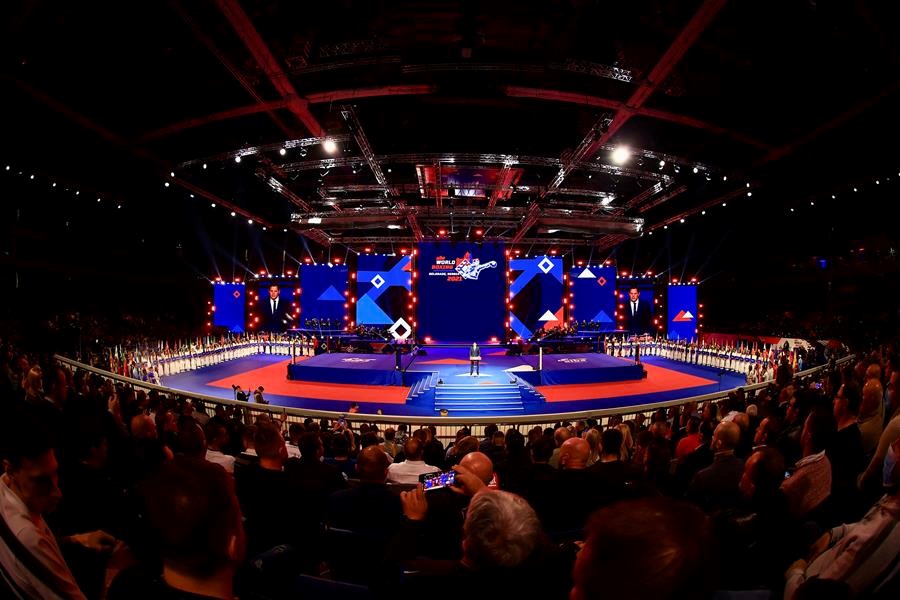 (October 25, 2021) – The AIBA Men’s World Boxing Championships marked its return to Belgrade for the first time since 1978 in style, with an Opening Ceremony that showcased the convergence of boxing’s rich history with the modernisation of the sport under its new leadership.

From 24 October to 6 November, more than 500 athletes from over 88 countries will compete in 13 weight categories – the most in the event’s history. The Opening Ceremony set the stage for a memorable two weeks of action, which will feature some athletes as part of a Fair Chance Team. It has been created for athletes who have felt forced to leave their countries, often because of conflict. For the first time in an AIBA competition, the team walked alongside the competing countries as part of the athletes’ parade.

During the ceremony the audience were taken through a captivating journey of boxing’s history, explaining how its early developments laid the foundations for the sport in its modern form. It also documented the inauguration of the Val Barker Trophy, which was introduced to honour the 19th century heavyweight champion who later became a key figure in the global growth of boxing. While AIBA is seeking to reform the sport and ensure AIBA is an open, fair and transparent organisation that serves as a welcoming home for all boxers, it has been made clear that the modernisation process will encompass the valued traditional aspects of boxing, which made it a unifying force around the world.

“As well as being stronger, our community is now also fairer because of the huge efforts we have made to ensure you can all be certain of fair fights. AIBA appreciates all the hard work that has gone into making this moment happen.”

There were also speeches from the President of Serbian Boxing Federation Nenad Borovčanin, Minister of Youth and Sports of Serbia Vanja Udovičić, AIBA Ambassador and boxing legend Roy Jones Jr, as well as several other AIBA Ambassadors. Throughout the night a series of artistic performances lit up the Štark Arena.