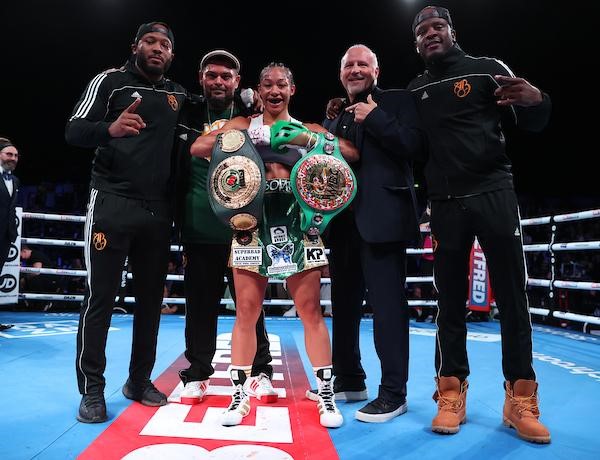 Baumgardner, who came in as a big underdog at more than 7 to 1, hurt Harper in round two with some hard right hands.

In round four, Baumgardner landed a big right hand that stunned and froze Harper. Harper was basically motionless on her feet. Baumgardner jumped in and landed one more powerful left hook just as referee Mark Lyson was stopping the fight just 23 seconds into the round.

Baumgardner, of Bingham Farms, Michigan via Fremont, Ohio, who is promoted by King’s Promotions, becomes a world champion with a record of 11-1 with seven knockouts.

“The ones that overlooked me, fueled me. People got to see a tad of who Alycia is. Since everyone was booing me, I embraced it and it pumped me up even more. When I landed the punch, I felt all my power hit her right on the chin. When I saw her hurt, I knew just to finish her right now. I thought immediately that I did it, and I am a world champion. I want to unify the division, and I am going to be the undisputed champion,” said Baumgardner.

“I am so proud of Alycia. She showed what a true champion is all about. She came into enemy territory, and came in here and knocked the champion out. Alycia is a special fighter and to win the championship in the fashion that she did was just awesome to witness. There are many major opportunities ahead for her, and when the time is right, we will sit down with Eddie Hearn and Matchroom Boxing and look at those options. She deserves time to celebrate this amazing accomplishment,” said Marshall Kauffman, CEO of King’s Promotions.

“Alycia did what I always believed she would do when we signed her three years ago. I knew Alycia would win a world title and it came to fruition. All she needed was one opportunity, and look what happened. I feel that in a very short time, Alycia will be one of, if not the face of women’s boxing,” said Andrew Foy of King’s Promotions.