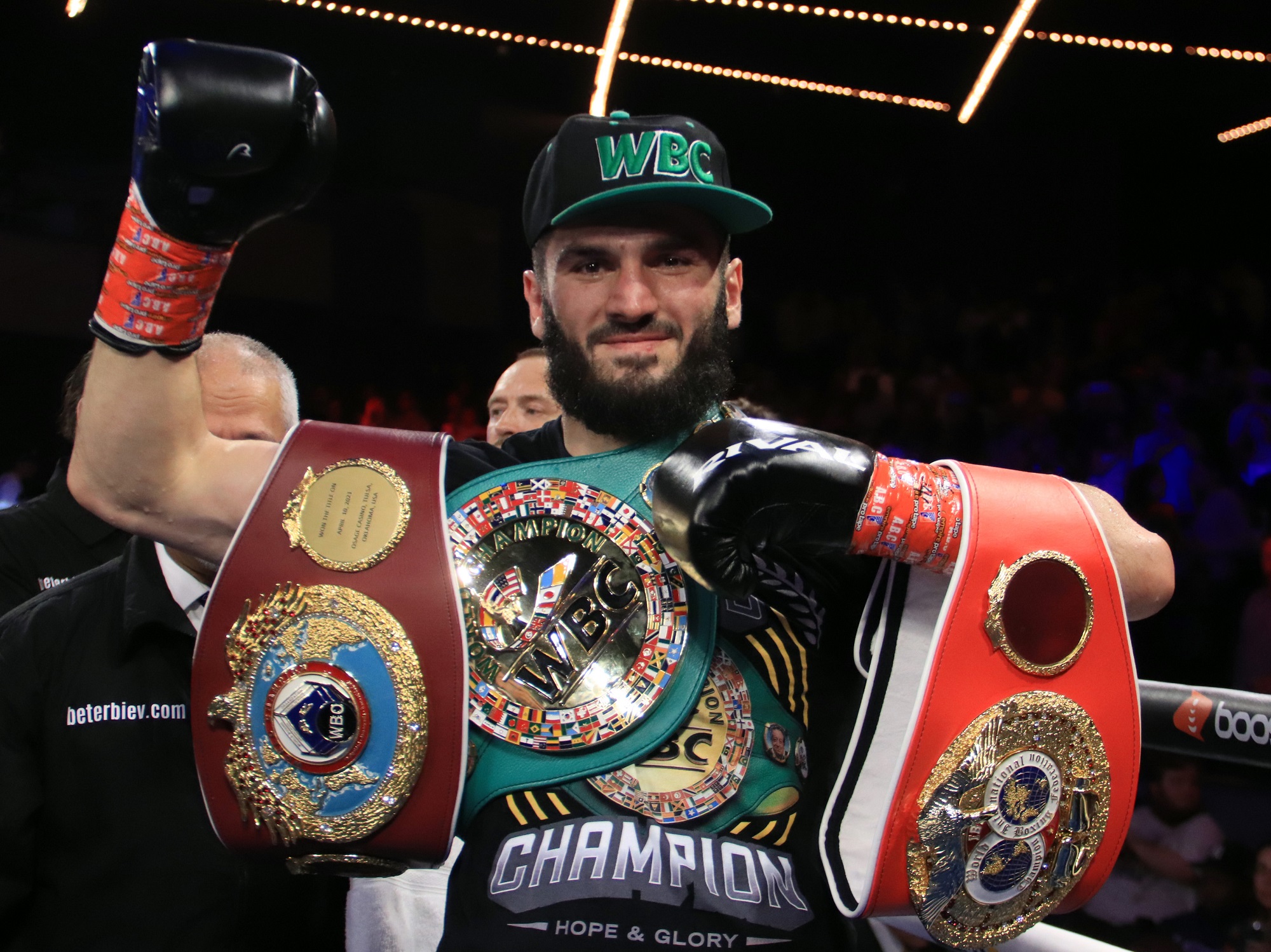 New York, New York (June 19, 2022) — The tremendous build-up to Beterbiev-Smith had boxing fans everywhere on the edge of their seats for the highly anticipated light heavyweight unification last night at the Hulu Theater at Madison Square Garden. It was clear that when JOE SMITH JR. (now 28-4 22KO’s), and ARTUR BETERBIEV (now18-0 18KO’s), finally met in the ring, it would be bombs away – and it was exactly that.

At the opening bell, Smith and Beterbiev met in the center of the ring and almost immediately began trading huge blows. Smith attempted to establish his jab, working from the outside and using his four-inch reach advantage to his benefit. As the round developed, Beterbiev was working on timing Smith’s jab. At the end of the first round, Beterbiev landed the defining ‘first real damage’, tagging Smith with a right hand that caught him on the top of his head. Smith was off-balance when the punch landed and his knee hit the canvas, the first knockdown of his career.

In the second round, Smith came out guns blazing, landing a clean left hook as the two power punchers traded freely in the center of the ring, however an overhand right from Beterbiev would find its way through sending Smith to a knee. A few moments later two upper cuts had Smith on shaky legs. Smith would valiantly remain on his feet, but referee Harvey Dock would make the questionable decision to stop the fight at the 2:19 mark of the second round.

“Congratulations to Artur Beterbiev on a great performance” said Star Boxing CEO JOE DEGUARDIA. “We all knew that this was a world title unification and with two massive punchers like Beterbiev and Smith that one punch could define the outcome of the fight. Beterbiev landed the more effective and fight defining punches. I believe that Joe started nicely but when he got tagged at the end of the first round it changed the fight as his warrior mentality kicked in and it altered his game plan”. When asked whether the fight was stopped too early, DeGuardia said: “this was a huge unification fight and Joe has one punch power that can change things in an instant, so you always want to see them give the fighters the opportunity to fight. However, Beterbiev fought a great fight and the referee made his call and I accept that decision. We are all proud of our champion Joe Smith Jr. for taking a fight that almost all others in the division avoided, and we continue to laud his extraordinary fighting spirit.”

On the undercard WENDY “HAITIAN FIRE” TOUSSAINT (now 14-1 5KO’s) defeated ASINIA “DGHOST” BYFIELD (now 15-5-1 7KO’s) by unanimous decision in an entertaining eight-round super welterweight bout. Toussaint calculated the tricky style of the switch hitting Byfield over the first two rounds, finding success to the body. In the middle rounds, Toussaint began to let his hands go, finding a home for a booming right hand. Byfield had his best moments when he was able to keep Toussaint moving backwards, but it would not be enough as Toussaint would get the unanimous decision nod by scores of 79-73 on all three judges’ scorecards.

Toussaint had this to say about the fight, “I would like to thank my promoter Joe DeGuardia and also Top Rank for a tremendous opportunity to fight on such a great card in the greatest building for boxing ever. The fight itself was a very good fight for me. My opponent was extremely awkward and very durable. I feel that going the distance will only help my career. Every fight cannot be a knockout so the work that I got Saturday night was a great benefit for my career. I am hoping for more big opportunities in the near future and to further my career with the goal of becoming a world champion. I thank everyone who came out to support me!”

Schenectady, New York’s undefeated super welterweight JAHYAE “GOLDEN CHILD” BROWN (now 11-0 8KO’s), opened the show against a game KEAN “ICEMAN” MCMAHON (now 7-3 4KO’s) in a six-round super welterweight bout. Brown and McMahon showed high level boxing skills, quick hands and a strong ring IQ. For every combination thrown, a response combination was reciprocated. Brown tended to be first, and put the pressure on McMahon for much of the fight. McMahon attacked the body nicely with quick combinations. At the final bell it would be Brown’s pressure and effective punching that would earn him the unanimous decision victory (60-54, 59-55, 59-55).

“Hard work pays off,” said Brown. “Thanks to everyone who came out to support me. Fighting at Madison Square Garden was a dream and we got the job done. Thanks to my team; trainers Sam Bunch and Sammy Young, and to Star Boxing for the opportunity!”