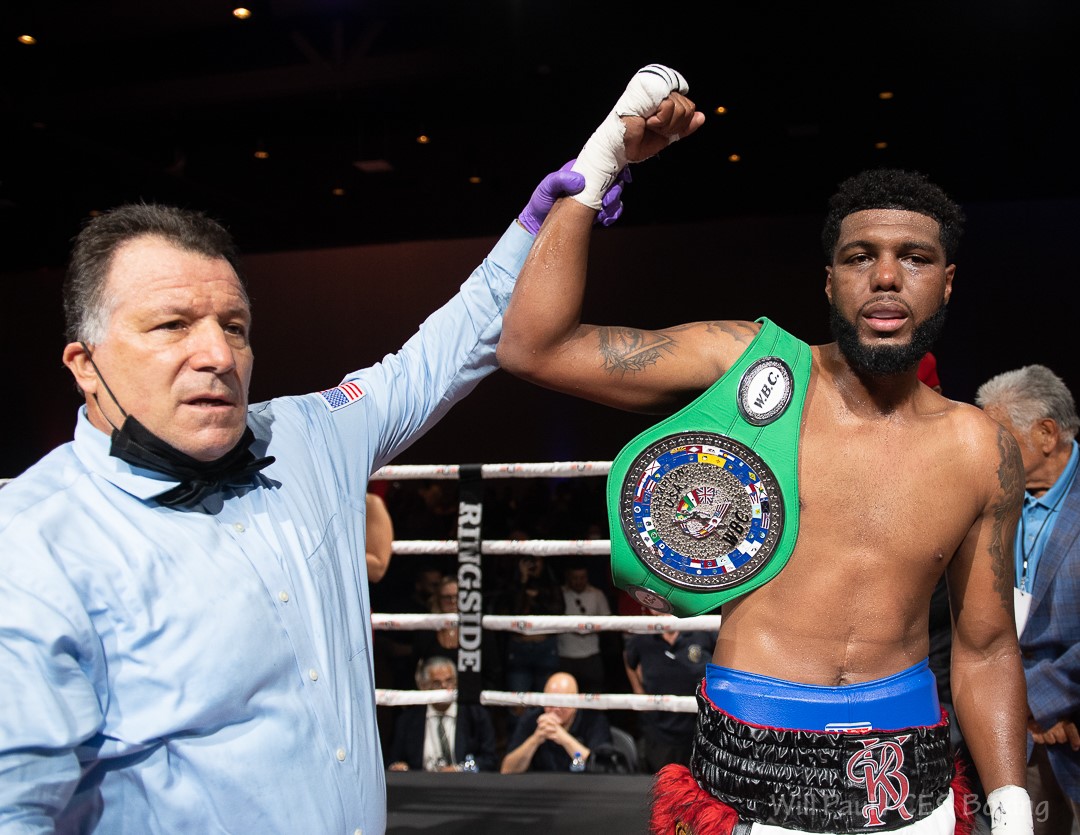 Springfield, MA (November 10, 2021) – The reigning WBC USNBC Silver super middleweight champion is hoping to jumpstart his holiday shopping with another piece of hardware to add to the trophy case.

Kendrick Ball Jr. (17-1-1, 11 KOs) of Worcester, MA, the reigning title-holder at 168 pounds, returns to the ring Saturday, November 27 at the Mass Mutual Center to face Sacramento’s Mike Guy (12-7-1, 5 KOs) in a 10-round bout for the vacant WBC USNBC championship, headlining a stacked card promoted by CES Boxing.

The event comes two days after Thanksgiving and is an early holiday gift for New England fight fans who’ve once again grown accustomed to attending live events amidst the COVID-19 pandemic. The event also caps a busy 2021 for New England’s No. 1 attraction, CES Boxing, a year in which Ball has already won two title fights as he attempts to go 3-for-3 to close out the season.

Per usual, the WBC’s famed green and gold belt is up for grabs with Ball looking to become a two-time champion and join fellow Worcester natives Jamaine Ortiz and Irvin Gonzalez Jr. – the reigning Youth lightweight and featherweight champions, respectively – as CES fighters who currently WBC titles. The action begins 7 pm on November 27 and tickets are available online at CESFights.com.

For Ball, 2021 has featured several important milestones as he moves closer to his dream of contending for a world title. In April, he chopped down former world-title challenger Brian Vera to capture the USNBC Silver title, upending a veteran of 35 pro fights in a convincing unanimous-decision win.

August was arguably the biggest test of his career, his first defense of his title and a showdown against up-and-comer Tyi Edmonds, another unanimous-decision win in which the champ sealed the bout down the stretch courtesy of a late knockdown.

Up next is another stiff challenge, this time against the upset-minded Guy, a cagey, 40-year-old veteran who is well-known in boxing circles for pushing – and defeating – favored opponents and for a relentless attack in which each punch is thrown with bad intentions.

The combined record of Guy’s last seven opponents dating back to 2017 is a staggering 139-18, and that’s not even including his 2016 showdown with Ukrainian standout Sergiy Derevyanchenko. Like many undervalued road warriors, Guy’s resume is a who’s who of rising talent in the super middleweight division, except the difference is Guy has done more than just show up to earn a check. In what was arguably the best stretch in his pro career, the 5-foot-8 challenger defeated unbeaten Marco Delgado (5-0), Eric Moon (11-1), and Denis Douglin (22-6) in succession, earning him a spot amongst the most talked-about fighters in his weight class. He also went eight hard rounds in September with the super-talented Jesse Hart in Philadelphia.

Underestimating Guy would be a risky strategy for Ball, who continues to dedicate more time and energy to his craft than ever before. His eight-fight win streak, which dates back to 2018, has led to a surge in popularity, making the humble, soft-spoken 29-year-old a star in his hometown and a soon-to-be-recognized name among elite the 168-pounders.

That fight, which promises to pack plenty of intensity and drama, merely scratches the surface on what CES has planned for November 27.

Vincent’s comeback, which has been two years in the making, adds an additional layer of intrigue, and Martinez is once again stepping up the level of competition against Santiago, who has faced the likes of Jude Franklin and Dominique Francis over the course of his career.

Another intriguing bout is a six-round super lightweight showdown between southpaw Dashaun Johns (4-1, 3 KOs) of the Bronx and Pittsburgh’s Daniel Mitchell (5-4-1, 2 KOs), who returns to the ring for the first time in six years. Both fighters are making their CES debuts. Heavyweight Tim Hatfield of Providence, RI, fights as a professional for the first time in a four-round bout against Woburn, MA, heavyweight Rodrigo DaRocha (0-1), and female welterweight Stevie Jane Coleman (1-1) of Columbia, CT, looks to build off her first pro win when she battles Nevada’s LeAnn O’Malley (1-0) in a four-round bout.