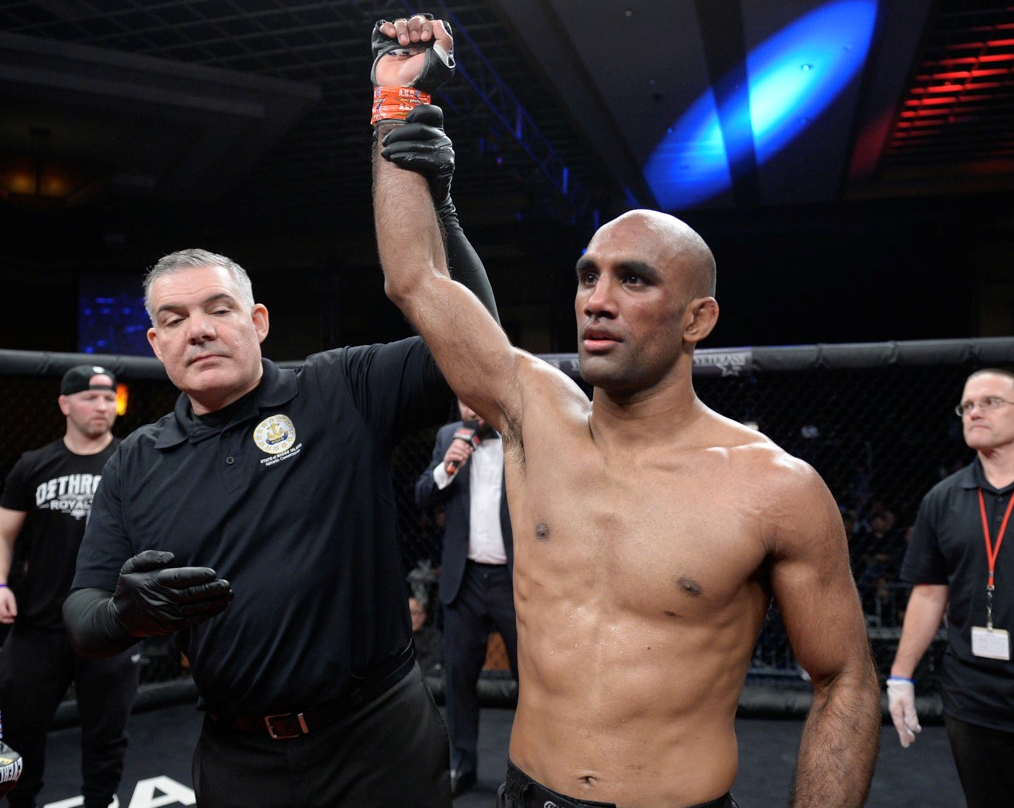 Lincoln, RI (June 7, 2022) – The timing couldn’t be better for Queens’ Ashiek Ajim as he prepares for what might be the most important fight of his young mixed martial arts career.

The 27-year-old bantamweight was supposed to get his first crack at a world title back in March at CES 66, but, as luck would have it, a few roadblocks prevented him from stepping inside the cage that night.

Three months later, Ajim has a new opponent, another shot at the crown, and an even greater appreciation for what’s at stake in less than two weeks when he battles Mongolia’s Azjavkhlan Baatar for the vacant CES MMA World Bantamweight Championship at CES 69 Friday, June 17 at Ballys Twin River Lincoln Casino Resort live on UFC FIGHT PASS®. Bataar, fresh off a big win at CES 67 in his promotional debut, predicts a first-round finish on the 17th, courtesy of his “heavy” left hand.

As Ajim (5-1) puts the finishing touches on his training camp for the June 17 bout, he’s cognizant of the unpredictability of combat sports. He was scheduled to face former bantamweight champ Jay Perrin at CES 66, but Perrin got the call to compete for the UFC shortly before the event. Days later, Ajim suffered an injury while in the process of preparing for a new opponent, temporarily shelving his shot at a world title.

“It all happened pretty quickly,” Ajim recalled, “but the way I looked at it was maybe this was the universe’s way of saying, ‘Don’t go into a fight like this. Take your time and wait for the right opponent.’”

Ajim remained confident he’d get his chance and watched from the sidelines as the next surprising series of events unfolded. With both he and Perrin out of the mix, Brazilian Diego Silva beat hometown favorite Andre Soukhamthath for the vacant crown at CES 66, only to get stripped of the belt for breaching his contract several weeks later. When Baatar (8-6) beat Johnny Lopez a month later at CES 67, the stage was set for the most logical matchup – Ajim vesus Bataar for bantamweight supremacy.

“He is a good fighter and has a very dangerous right hand, but I will be better than him in any position no matter where the fight goes. My left hand will be too heavy for him.”

While not one for predictions, Ajim is as prepared as one could be heading into such a high-profile fight. In addition to feeling “100 percent” physically, Ajim has done his homework, studying as much fight footage he can in anticipation of his showdown with Bataar, including Bataar’s aforementioned win over Campbell in April.

“Prior to that last fight, he hadn’t fought in two years, but guys get better over time,” Ajim said of Bataar. “I like his style. He’s really well-rounded. Wrestling is definitely his background, and he can transition well to striking, but the wrestling is always in his back pocket.

“His last fight was surprising in that he put more pressure [on Campbell] than he has in previous fights. He usually fights off his back foot, and I expect that going into this fight. He might give me that space and I will use that to keep the pressure on him. He might not want to exchange too much with me. I’m ready for wherever the fight goes.

“I’m not the type to do much talking. I’ll let my fighting speak for me.”

With six fights – and soon to be seven – under his belt, Ajim is reaching that point in his career where promotions like the UFC begin to take notice. His goal, as is the case with most fighters, is to get to that next level, but he’s also mindful of the development process, particularly with the way he has built a solid career under the guidance of CES. All six of his fights have occurred with CES and he’s used the platform to score eye-opening wins over Arslan Otchiyev, Andres Rodriguez, and Carlos Espinosa, to name a few. Having experienced the benefit of remaining patient, Ajim is in no rush to reach the finish line.

“CES has been very good to me and has built me the way I fighter should be built up,” Ajim said. “I feel like after one or two more fights, I might be ready for the UFC, but if you asked me a fight or two ago I would’ve said no. I would’ve turned it down. I don’t want to be the guy that’s learning on the job. Once I’m there, I want to be the guy to beat.”