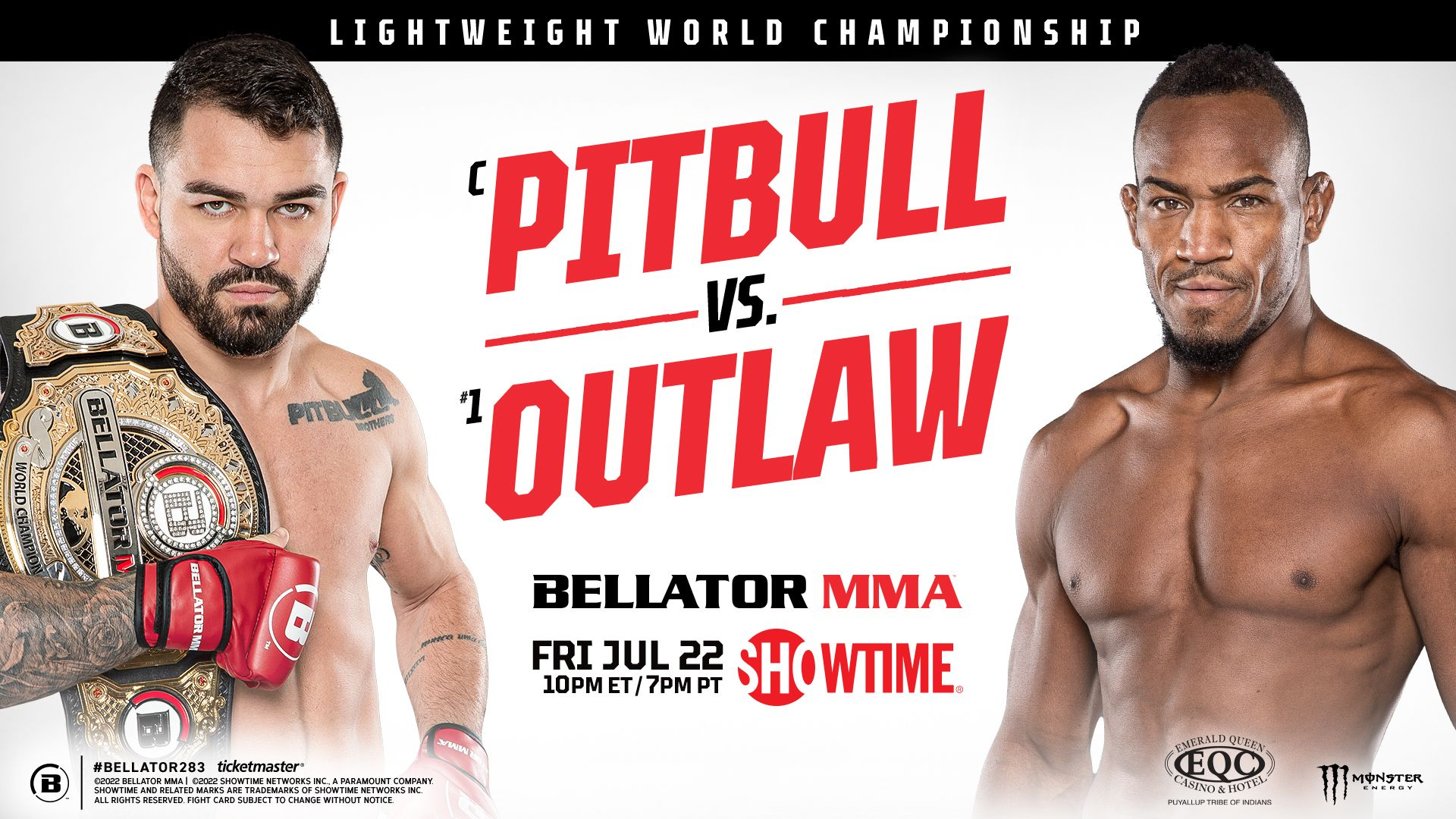 Tickets for the event go on sale this Saturday, June 18 at 2 p.m. PT and are available at Bellator.com and Ticketmaster. A special pre-sale will take place the same day from 10 a.m.-1 p.m. PT

One of the biggest stars in BELLATOR MMA, lightweight kingpin Patricky ‘Pitbull’ Freire has thrilled fight fans for over a decade inside the BELLATOR arena with his thunderous power and all-action fighting style. The Brazilian knockout artist, 36, has shared the BELLATOR cage with the likes of Benson Henderson, Roger Huerta, Michael Chandler, and Eddie Alvarez, capturing the lightweight title with a second-round stoppage of fan-favorite Peter Queally in November 2021. On July 22, ‘Pitbull’ will look to defend his title and turn back a hungry challenger in Sidney Outlaw.

Sidney Outlaw, 30, rose to prominence on the regional scene by dominating an impressive slate of opponents and scoring a bevy of highlight-reel submission victories and the Pennsylvania native hasn’t missed a beat since joining the BELLATOR roster. Outlaw’s path to his first title fight was bookended by a win over Huerta and a third-round rear-naked choke stoppage against Myles Jury last June. Against “Pitbull,” Outlaw hopes to dethrone a decorated pillar of the organization and add the prestigious BELLATOR lightweight championship belt to his mantle.

Former welterweight champion Douglas Lima, 34, has spent over a decade solidifying his place among BELLATOR MMA’s most accomplished and notable fighters. Now the No. 3-ranked welterweight contender, Lima lost his title to champion Yaroslav Amosov and dropped a contentious split-decision to Michael ‘Venom’ Page in his last outing. On July 22, Lima will look to reverse his fortunes and turn back upstart contender Jason Jackson in Tacoma, Washington.

Jason Jackson, 31, is on an absolute tear in the BELLATOR welterweight division. Since dropping his promotional debut to highly-decorated wrestler Ed Ruth in 2019, Jackson has rattled off five straight wins over impressive competition including former UFC lightweight champion Benson Henderson, Neiman Gracie, and Paul Daley. The Sanford MMA product will look to emerge as a bona fide title contender with a win over Lima at BELLATOR 283.

Usman Nurmagomedov, 24, comes from a family of MMA royalty. The cousin of MMA legend Khabib Nurmagomedov, he has been perfect throughout his professional MMA career to date, including three straight wins in the BELLATOR cage. A dominating grappler whose striking has evolved markedly over his last several fights, Nurmagomedov has cemented his status as a top-5 combatant in the stacked BELLATOR lightweight division. He will look to extend his unbeaten streak to 15 straight with a win at BELLATOR 283.

Seeking to add the first blemish to Nurmagomedov’s perfect record will be Team Alpha Male’s Chris Gonzalez, 30. A member of the U.S. 2016 Greco-Roman World Team and a former NJCAA All–American wrestler, Gonzalez has added a potent striking arsenal to his world-class wrestling background to become a true threat in the lightweight division. Coming off of a 2022 ‘Knockout of the Year’ contender via first-round head kick TKO against Saad Awad, Gonzalez will look to continue his momentum against Usman Nurmagomedov.

Adam Piccolotti, 33, has been on a tear since 2018. An impressive 4-2 over the past four years, the Half Moon Bay, California, native’s only losses during that span have been close split-decision defeats at the hands of #3-ranked Benson Henderson and #1-ranked Sidney Outlaw, who headlines BELLATOR 283. The Brazilian jiu jitsu black belt has scored six submissions as a professional alongside three knockout victories, and he will look to leverage his well-rounded skill set into a second consecutive victory on July 22 as he looks to spoil the promotional debut of Tofiq Musayev.

Tofiq Musayev, 32, will enter the BELLATOR cage for the first time on July 22 as one of the most highly-touted lightweights on the international scene. The Azerbaijani native put his country on the sport’s radar with his dominant run in RIZIN Fighting Federation, which culminated in a unanimous decision tournament championship victory over Patricky Pitbull in 2019. Musayev is a bona fide knockout artist, with 14 of his 18 wins having come by stoppage due to strikes. Musayev will look to immediately make his presence known in the BELLATOR cage in Tacoma, especially on the undercard of a former vanquished foe in ‘Pitbull.’

Romero Cotton, 32, can point to an equally impeccable resume as he enters this battle of undefeated prospects against Rosta. A three-time NCAA DII national champion wrestler at the University of Nebraska at Kearny, Cotton’s wrestling pedigree remains one of the most impressive in all of MMA. Cotton’s 83% stoppage rate as an MMA fighter reflects his efforts to add potent submission grappling and fight-ending striking power to his game, as well. Since signing with BELLATOR in 2017, Cotton has scored two rear-naked choke submissions and three knockouts. He will look to continue his winning — and finishing — ways against Rosta at BELLATOR 283.

Dalton Rosta, 26, is as physically imposing as his apt nickname “Hercules” suggests. The Mat Factory product hailing from New Castle, PA, has been flawless throughout both his amateur and professional MMA careers to date. Joining the BELLATOR roster in 2019 as one of the top amateurs in the country, Rosta coasted to three straight knockout victories before reaching the judges’ scorecards for the first time in October of 2020. A powerful wrestler with capable striking, Rosta has continued to dominate opponents with a relentless pressure on the feet and the canvas.