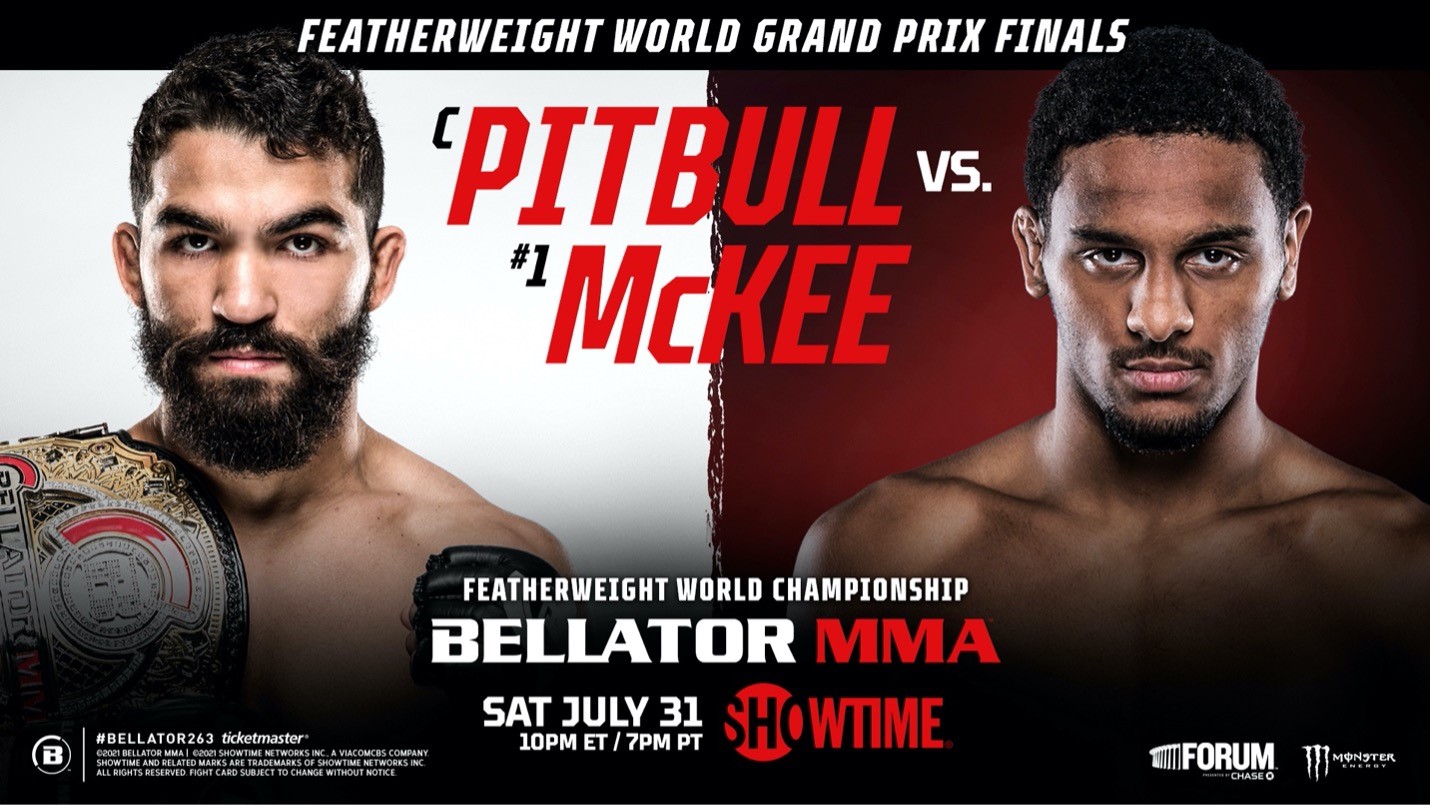 BELLATOR 263: Pitbull vs. McKee will emanate from the Forum in Inglewood, Calif., and will air live on SHOWTIME at 10 p.m. ET/7 p.m. PT. Tickets for the event go on sale tomorrow, Friday, June 18 at BELLATOR.com and Ticketmaster.com.

Here is what the fighters and their coaches had to say Wednesday:

“I’m a little bit older and faster than the rest of my division and I’m going to use this in my favor. (22:47)

“Of all the opponents I’ve faced, AJ is the most dangerous, and I know that. With that being said, I know that I’m going to win this fight and prove his father wrong. (26:18)

“At the beginning of his career, he faced very low-level guys. He has a few wins over tough opponents, but he’s never fought anyone like me. He claims that he is ready for me, but he isn’t, and he’ll learn that very quickly in front of his home crowd.” (38:48)

“It’s been a great journey and this is something I’ve dreamed of my entire career. Like I said, I’ve been calling Pitbull’s name since I first stepped into that cage and he’s ignored me, pretending like he doesn’t know who I am. At the end of the day, there is nowhere else for him to run and he has to look me in my eyes. I’m looking forward to it. Everyone says I haven’t been tested and I agree. But, when you do see me get tested, a whole different animal will come out. (23:22)

“After I beat Pitbull and become the face of BELLATOR, we can run it back for that second belt too. Becoming champ-champ is something that I said I was always going to do, and that I will do. I went through the trials and tribulations of not wanting to fight, to then having my passion for this come back and me seeing all my goals be within reach. It’s going to be fun, especially after the long break due to my knee surgery. I can’t wait to get in there again. The Mercenary does one thing: he signs the contract and then takes the person out. (24:22)

“I’ve been preparing for this fight for six years because Pitbull has been at the top for so long. Once again, I have a foot longer reach on him, so he has to come to me. He says he is training with gold medal wrestlers, but I will do the same thing to him that I did to Pat Curran and Darrion Caldwell. I’m comfortable off my back. Just because he’s Brazilian, that doesn’t mean anything in terms of Jiu jitsu. I have that evolved Jiu jitsu and that’s what I get people with when they don’t see it coming.” (31:45)

“We’re excited to be back in California and we are excited to be back in the Forum, a place where we have had so many great fights. It’s going to be an amazing event. My staff is excited and the fighters are excited. When you think about live sports, it needs fans. We got a taste of it last week at the Mohegan Sun, which has been an amazing partner for us, but it’s time to travel and get back to what BELLATOR does best. That is putting on great fights touring from city-to-city, starting with this amazing fight on July 31. (4:10)

“This is the fight that everyone wanted to see. We have so many amazing athletes in this division that we went through the lottery system for matchups, which provided us with amazing fights. But at the beginning, I was wishing that the final would be McKee versus Pitbull. When we signed McKee, he had zero fights to his name. Now, look at where he is today. Back then, Pitbull was our champion and obviously still is today, so this fight is the “OG” vs. the new guard and we’ll have to see what happens.” (5:13)

“Patricio’s had a bullseye on his back since he became the champ in 2014, when he beat Pat Curran and this run has gone exactly as we planned. We were the matchmakers, we sent Darrion Caldwell to the other side of the bracket to take out some of the young bucks and he did. Then, AJ took him out and here we are. I think this is the perfect matchup for the finals. We have a young, up-and-coming, undefeated fighter and the pound-for-pound best fighter on the planet, Patricio Pitbull. This is going to be the greatest fight in BELLATOR history. (7:20)

“I lived a different life, one where it wasn’t all good. I was dealing with a lot of stuff that a lot of African American men deal with. No mother and no father, growing up in the streets of Los Angeles. It was what it was, but I made the right decisions and never got caught for anything that I did that could have put me away for the rest of my life and found my drive and motivation through my son. The things that AJ would say as a kid, like ‘Daddy if you die, can I die with you?’ I didn’t care about living and I didn’t have a problem with killing either. And then one day AJ says ‘Dad, whatever you do and wherever you go, I want to come with you.’ I was ready to clock out, but then I realized that I needed to be here for him. He had nothing but me, so that gave me the drive and the strength to find a better way out.

“I made it this far, did my thing as a wrestler and was the best in the world. I did what I was doing, but I didn’t have the right mindset, so I had to check my mental and learn how to be a respectable human being. Once I did that, things started to shift for me and now here we are. I did things to keep AJ in private school, not to buy cars, music, and jewelry. I did it all to pay for his school tuition.” (14:36)