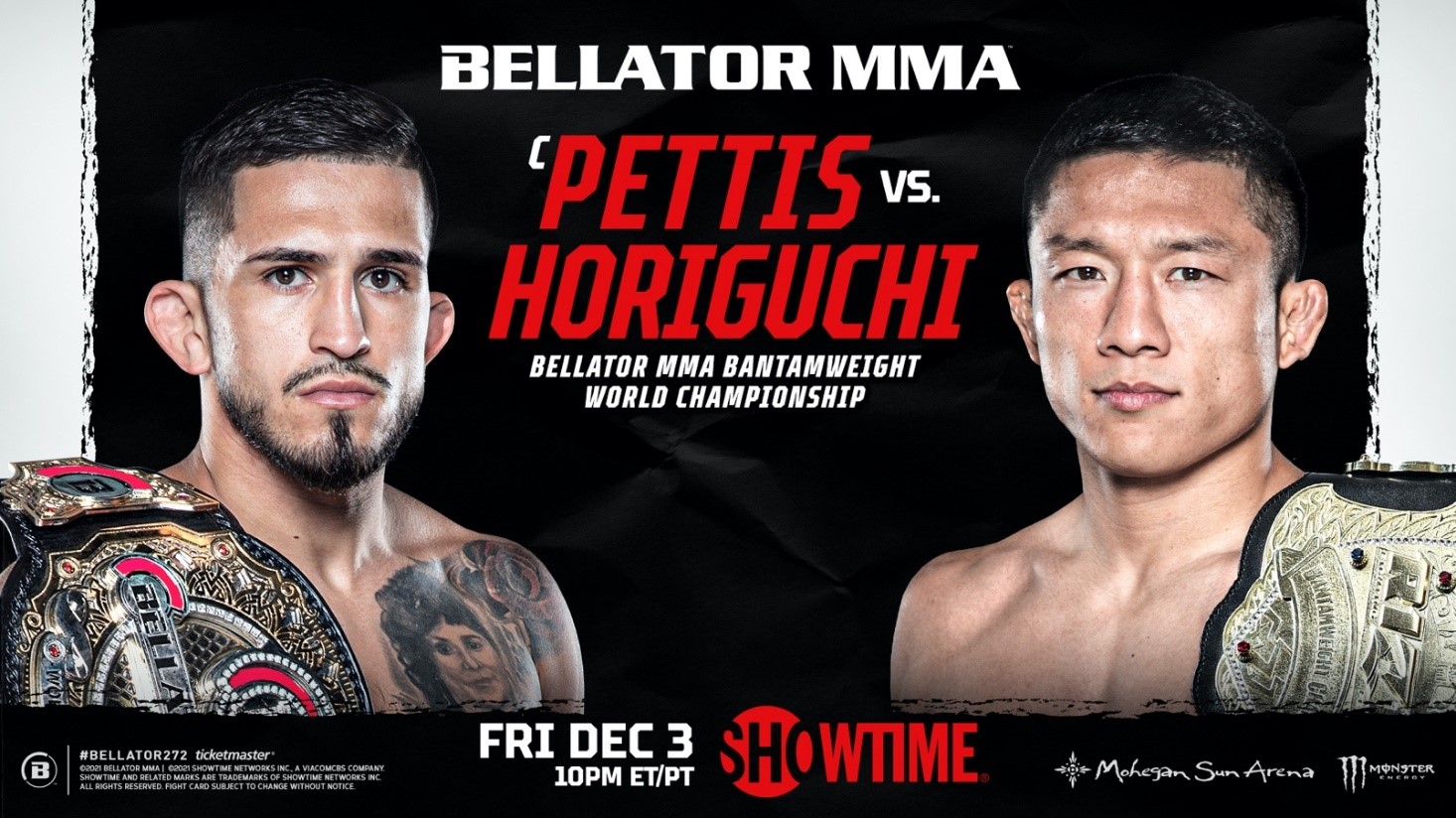 UNCASVILLE, CONN. (Dec. 1, 2021) – It’s the most wonderful time of the year as BELLATOR MMA rings in the holiday season and closes out a stellar 2021 with BELLATOR Bantamweight World Champion Sergio Pettis (21-5) defending his belt for the first time in an international clash against former BELLATOR 135-pound titleholder and current RIZIN champion Kyoji Horiguchi (29-3) Friday, Dec. 3, on SHOWTIME at 10 p.m. ET/PT from inside the Mohegan Sun Arena in Uncasville. Conn.

In the thrilling co-feature, former featherweight world title challenger and No. 4-ranked Emmanuel Sanchez (20-6) will take on former UFC standout and No. 9-ranked Jeremy Kennedy (16-3, 1 NC).

Also anchoring the main card will be a bantamweight showdown pitting No. 7-ranked Josh Hill (20-4) against UFC veteran Jared Scoggins (10-1), as well as undefeated American Top Team-product and No. 5-ranked middleweight Johnny Eblen (9-0) putting his unblemished record on the line against BELLATOR newcomer Collin Huckbody (10-3) who has vanquished seven of his last eight opponents.

Tickets for BELLATOR MMA 272 are on sale now and can be purchased at Ticketmaster.com and Bellator.com.

Here is what the fighters had to say on Wednesday, Dec. 1:

“Wherever the fight goes, I will be ready. I want to go out there and dictate the pace. I don’t waste any motion or emotions out there.”

“Right now, BELLATOR is my home. I have the belt here. The main focus is Horiguchi this Friday. Once I get past that, we’ll see what happens.”

“I am in a groove right now and am on a four-fight win streak. You are really starting to see my potential. I really lacked that at the beginning of my career. I did not believe in my myself or my skill set. Right now, I believe in my skill set. My mindset is sharp, and everything is coming together.”

“I am taking myself seriously. I used to drink a lot and smoke a lot. Well, I still kind of smoke a lot, but I do not drink as much. I take myself a lot more seriously now. I am in the gym every single day. I feel like it is my time.”

“I have fallen in love with martial arts. This sport has taught me some beautiful things inside of the cage and out. It has been an awesome journey.”

“When I fought at 125 (pounds), I was definitely feeling fragile. The mentality at 125 is a lot different. It was a tough weight class for me because I walk around at about 162 or 165 (pounds). The individual I was back then wasn’t as dedicated.”

“I don’t care where I fight, either in Japan or this arena (Mohegan Sun). My condition is the best right now.”

“I prepared quite well for this fight. I will win.”

“I am focusing on getting the (BELLATOR bantamweight) belt back right now.”

“I have confidence to fight with him (Sergio Pettis) regardless of whether he uses jiu-jitsu or not.”

“I don’t get nervous and don’t feel pressure. A fight is a fight.”

“Pettis is a great fighter because he has the belt right now, but I am going to get it back.”

“I had to learn a lot from my fights with Patricio Pitbull and Mads Burnell. It has been difficult, but I am 100 percent focused. I am ready to showcase who I really am, what I can do, and come out with a victory this Friday night.”

“I am really excited that we have this new (BELLATOR Featherweight) Champion in AJ McKee. He is a great fighter. We were scheduled to fight a couple of years ago and it did not happen. It is the only fight that I have ever needed to pull out of, but I know I will get that chance back one day and hope he (McKee) stays on top. First and foremost is Jeremy Kennedy and then I’ll work my way back up.”

It is time to shine, baby. We are (Sanchez and Pettis) finishing up the night strong by fighting in the co-main event and main event (on Dec. 3). We’re stealing the show.”

“Sergio and I are only a weight class apart. I am always learning from him even though I am older. He is a lifelong martial artist. It is not a race or a competition, but I got my black belt in jiu-jitsu before him. We are always helping each other in every department. We are really just blood brothers going out and making it happen.”

“Jeremy (Kennedy) is great at everything. He is a tough Canuck, man. He brings it and that is what makes this such an exciting fight. It is not like he is looking to just wrestle and control on the ground, or just strike, stand, and bang. It is a little bit of everything. So that makes for an exciting fight, and we’re going to throw down.”

“Jeremy brings so much to the table. He is on the top-10 list for a reason. I see a lot of the holes that I can capitalize on. I know how and why I am going to get my hand raised on Friday night.”

“My whole lifestyle has changed. I was going back and forth between Canada which was home, and Las Vegas where I trained. I got possession to my house (in Las Vegas) on April 1 and fought on April 9. For the last seven months, I have been living in the same atmosphere where I do my fight camps.”

“I have constantly been in the gym grinding day in and day out. That has completely made me a different fighter. All around, my game has just gotten so much better.”

“It was a very competitive last fight (against Adam Borics at BELLATOR MMA 256). I am the better fighter. I lost and it was a tactical error on my part. It shows what BELLATOR sees in me. They know I belong at the top of the division. I plan on running through (Emmanuel) Sanchez and see what’s next.”

“This has been the favorite year of my career. It is a super competitive division. I love all the matchups. I feel like I can compete at the top of the division.”

“Emmanuel Sanchez has been a fighter that I have followed for years, and I can’t wait to fight him now.”

“My strengths play right into his (Sanchez’s) weaknesses. He will realize quickly during these exchanges that I am different. He will have a very hard time getting me off him if the fight hits the mat.”

“My whole life is MMA. That is what I have always wanted. I finally got to that stage. Here we are in the biggest fight of my life.”