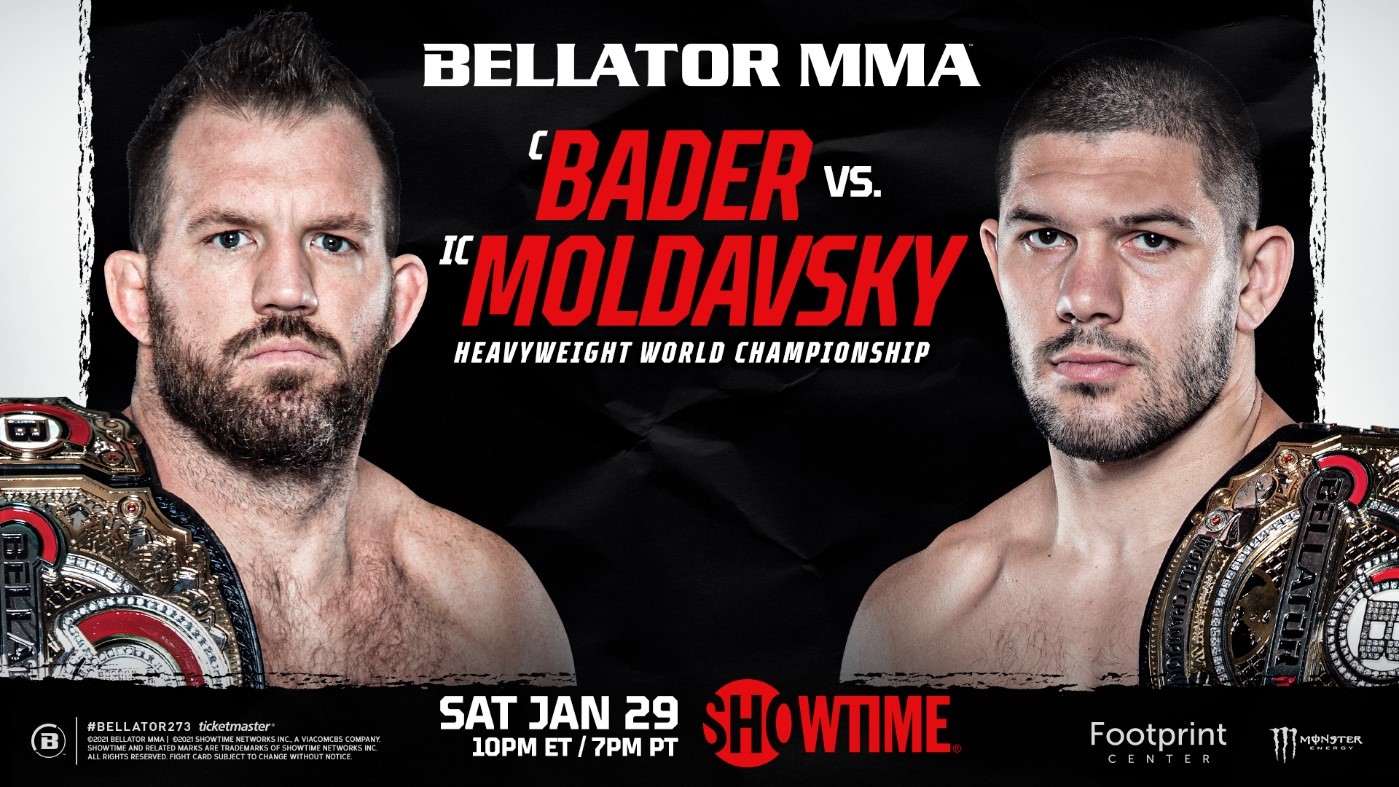 The card’s co-main event will feature a showdown of top-10 lightweight contenders as Phoenix, Ariz., resident and No. 6-ranked Benson Henderson (28-11) hopes to thrill the hometown fans against No.7-ranked Islam Mamedov (20-1-1).

Tickets for BELLATOR MMA 273: Bader vs. Moldavsky are on sale now and can be purchased at Ticketmaster.com and Bellator.com.

Here is what the fighters had to say on Wednesday, Jan. 26:

“I am a black belt myself. He is more of a sambo guy. I have seen a couple of fights with him (Moldavsky) on his back. He usually just waits to explode. I have been in there with some of the better guys in the world on the ground. I am totally fine wherever this fight goes. He is good everywhere, on the ground and on his feet. There are different areas I can exploit.”

“The last fight (in Phoenix at Bellator 268 on Oct. 16, 2021) was not the result we wanted. The crowd showed up. Arizona showed up. We packed the house. Let’s get a little redemption here in front of the home crowd.”

“It means a lot to me to go out there, defend and unify this heavyweight title. I have been wanting to fight at heavyweight for two years. He (Moldavsky) is an interim champ. a great prospect. I have had my eyes on him for a while.”

“I am not done yet. I feel that fire still. I feel healthy and I can train the way I need to in order to be successful. I don’t want to look back and say, ‘Oh man, I had a few years and a few fights when I stopped and regretted it for the rest of my life.’ I feel amazing. I don’t see any quitting here in the near future.”

“A Fedor (Emelianenko) fight is big. I don’t see how I can do it much better than I did the first time we fought. A Fedor fight is something that will always interest me.”

“Sullivan Cauley is a high-level fighter and one of the better guys I have trained with. His wrestling is on point. His striking is pretty damn amazing at his level and his age. To be able to go through camp with him, push each other, and gauge ourselves off of each other has been awesome. He is definitely a guy to watch in the future. He is going to do really big things.”

“We went through a weird time with Covid, not really knowing when the fights were and what weight class. So, I had to be in this limbo and keep my weight at a certain point. Cutting out water started getting harder and harder. It didn’t benefit me. I am excited to be back at heavyweight and feel good going into the fight.”

“It’s a bad idea to fight with Bader for all five rounds. It would be better if I finish him in maybe the second round. He has not lost a fight to a decision. He always wins a decision. I must beat him early, not five rounds.”

“It’s not personal. MMA is a sport. Bader is a good guy. He is aggressive.”

“I hope it is a KO or TKO in the first or second round. If needed, I am ready to fight all five rounds.”

“I am incredibly happy and thankful to be fighting in my adopted hometown. I enjoy having my family, friends, and my fans come out and support me. I won’t be doing this much longer, so it definitely means a lot to me.”

“It was awesome to be inducted to the Asian Hall of Fame three or four years ago. I am very appreciative of the Asian community.”

“I have to have the BELLATOR belt around my waist, otherwise things just don’t make sense. I am not going to stop until that happens. I’ll keep going until the wheels fall off. I just need to go out there and do the things I need to do, get my hands raised to make sure I get that BELLATOR title shot.”

“I am your guy. I am your huckleberry. If Islam (Mamedov) is the quickest way back to a title shot, sign me up.

“My wife asked me to get her a third belt five or six years ago. I will get my wife a third belt.”

“I am not going the distance. I am going to beat his (Enrique Barzola’s) ass. I am here to hold down the BELLATOR banner. Saturday night is business.”

“I still have a lot of juice left. I’ve still got a lot of fight in me. Even though I have been here for a while, we are just getting started. The Wolf 2.0 is in full effect. In 2022, you guys are going to see a completely different fighter than previously.”

“I am coming here to steal the show. Even though I am not on the main card, my fight will be talked about the most.”

“There is a line of BELLATOR bantamweights that are tough. I will wax this kid. I can string together some good wins. I am next in line.”

“At first, I was supposed to fight Romero Cotton. I was getting ready for an orthodox wrestler. (New opponent) Duane Johnson is the complete opposite. He is a southpaw striker. We switched up the game plan immediately.”

“Duane Johnson is a good fighter. He is athletic. He has good striking and jiu-jitsu from what I have seen. I am better than him everywhere. It is not about exploiting weaknesses; it’s going to be about my strengths. Wherever this fight goes, I will win.”

“My last two fights were against good fighters. Tony Johnson was a very experienced opponent and a very good striker. One thing that I learned and proved is that I am an all-around mixed martial artist. This isn’t boxing, this isn’t wrestling, this isn’t jiu-jitsu, this is MMA. When it comes to mixing everything up, I do it better than most of the people in the game.”

“Camp went great. I was healthy and able to train hard the whole way through. I was battling injuries last camp.  I trained a lot with Bader. It’s always super competitive. I feel great coming into this fight.”

“Ben Parrish is a gamer and has good power in his hands, so that’s what makes him dangerous. I am really fast. I have good wrestling. I am planning to go in there and put it on him.”

“He (Ben Parrish) looks to cover and counter, switch his stances. We have a beat on what he does. Fighting is never super predictable. You have to go in there and prepare to adjust. I try not to focus too much on a gameplan, and definitely don’t focus too much on what I am worried about a guy doing.”

“You should expect fireworks on Saturday night. That is a safe assumption.”

“I keep my fight camps under wraps. We kind of stay in the shadows. I am coming in like The Dark Knight on this one.”

“I am going to stop writing 5-1 and write 6-0 (for his MMA record). As soon as I’m done with this guy, I kind of hope BELLATOR will bring Logan Woods so I can get my loss back. I want that back.”

“You can expect a big money show and big drama show from me going forward. I am here to have the most entertaining fights that money can buy live on SHOWTIME.”

“My motivation is being counted out. This guy (Sullivan Cauley) gets to come straight into BELLATOR, but me and my teammates are all out on the regional scene having to deal with jank-fest promoters and fighting killers for $600. Even there I made more money than those regional fighters. He gets to come straight in. He is 2-0 in Bellator, and I’m getting brought in as the underdog. Do you think I’m going to let him take all this that I have been working my whole life away from me?”

“I don’t want nothing for free, but I will take everything. I swear to God.”