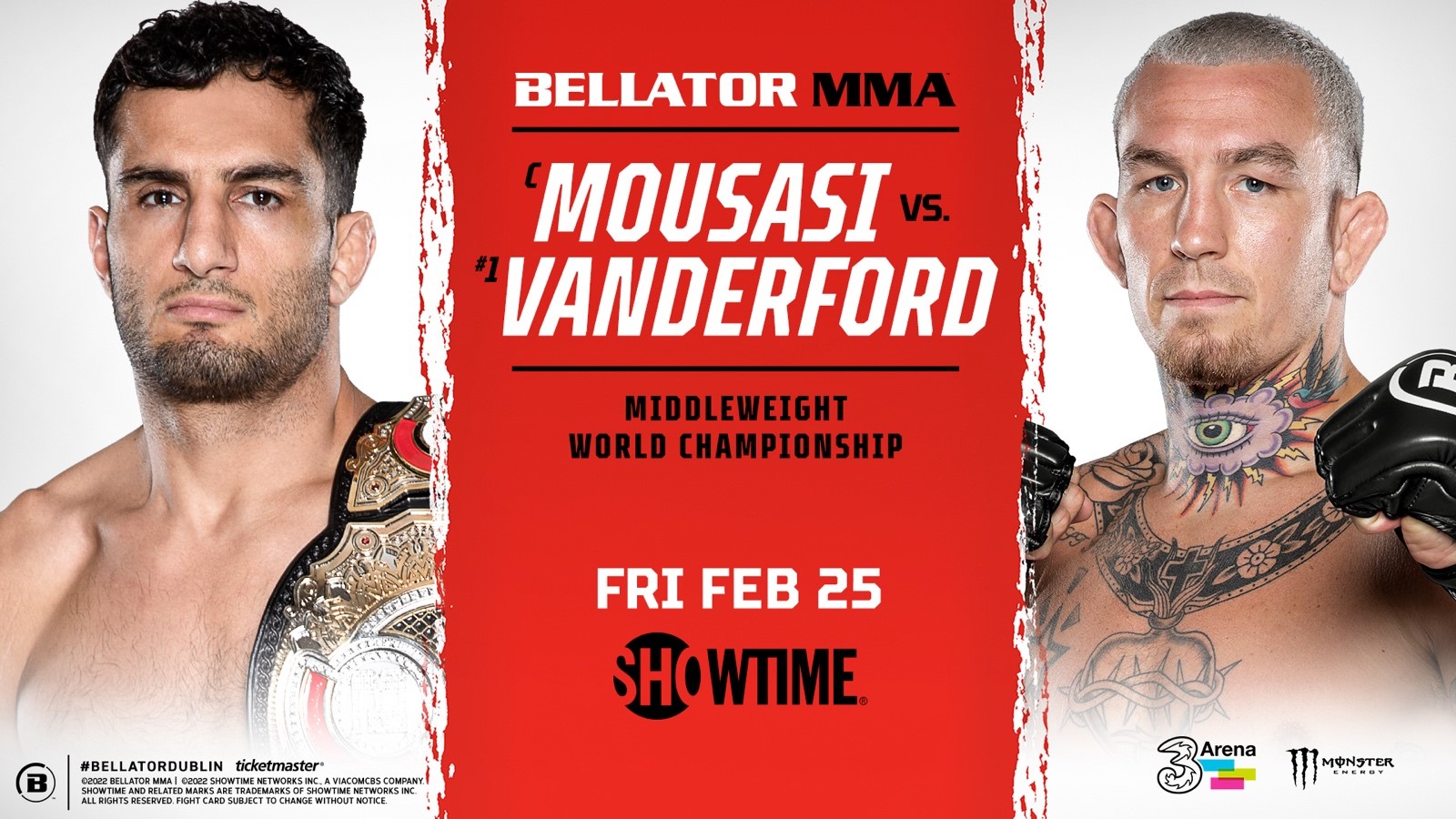 DUBLIN (Friday, Feb. 23) – Fighters from BELLATOR 275: Mousasi vs Vanderford spoke to the media today in advance of BELLATOR’s explosive return to Dublin’s 3Arena this Friday, Feb. 25. The highly anticipated return to the Irish capital sees one of the most dominant middleweight fighters of all time and current world champion Gegard Mousasi (48-7, 2 NC)defend his crown against undefeated American Top Team standout Austin Vanderford (11-0). The co-main event sees Northern Ireland’s Leah McCourt (6-1) and Ireland’s most-recent title challenger Sinead Kavanagh (7-5) in what is set to be the biggest Irish female fight ever.

BELLATOR 275 will sport a five-fight main card, including two great featherweight features between Ciaran Clarke (4-0) and Abou Tounkara (7-2), as well as Khasan Magomedsharipov (6-0) versus Jose Sanchez (11-1), plus a bantamweight bout between home favorite Brian Moore (14-8), and No. 9 ranked Jornel Lugo (7-0) to kick things off.

The event marks the first international card to air live in the United Kingdom on BBC Three, while fans in America can watch live on SHOWTIME at 9 p.m. GMT/4 p.m. ET/1 p.m. PT. The stacked eight-fight preliminary card airs live on the BELLATOR MMA YouTube channel, SHOWTIME Sports YouTube channel and Pluto TV beginning at 1 p.m. ET/10 a.m. PT. Limited tickets for the event remain and are on sale now and can be purchased online from Ticketmaster.ie and Bellator.com.

Here is what the fighters had to say today during their pre-fight virtual media availability:

I’ve been here before, I’ve fought twice already in Ireland and I’m excited to be here. Nice people here, very friendly and they are big fighting fans. I hope to perform well. I think the crowd will be on my side, but I don’t think competing her previously is an advantage.”

“He’s an undefeated, 11-0 guy who is younger than me. He’s confident, he feels he has something to prove, he’s fighting for the belt. I think I have a big task ahead of me. But my coaches told me I have never been stronger, God gave me special powers for this fight, and Austin’s going to feel it.”

“Fighting for so long I have learned a lot. When I fought Lovato Jr. I respected his jiu-jitsu too much, with King Mo, he was too strong, so I stayed down on the ground too long. When Chris Weidman took me down, I got up every single time.”

“If I fight Yoel Romero, I fight him at middleweight. It’s up to BELLATOR if they want to make that fight. If they give me the fight, I’ll take it.”

“I expect Gegard to be Gegard and that not much will change from all of his previous fights. I’m just a different animal and a different opponent that he’s going to be facing. I feel good, I’m confident and I’m excited for Friday night. It would mean everything to get that belt. I was holding it for photos the other day and I just can’t picture myself leaving Ireland without it.

“I knew going into this fight that I would be an underdog, for sure. Most guys that are gonna come up against Gegard are going to be underdogs, so I was aware that’s what was going to happen. It’s kind of a fun position to be in, honestly, to maybe be slightly overlooked. When I go out on Friday and do what I know I’m going to do, it’s just going to be more fun and my bank account might look a little better too.”

“I’m feeling good, I’m ready for this, I’m ready to take my crown. The first day I saw her, I gave her a hug, but now I’m all business and I’m cold.”

“She’s going to try and take me down like everyone else does, it’s nothing new, I’m prepared for this. I’m buzzing and it’s been so long since I fought here. I’m really looking forward to people watching me fight. I’m ready for this. I went toe-to-toe with the best in the world, it didn’t go my way, but I’ll be back and correct my mistakes.”

“I’m good on the ground, I just haven’t been able to show my skills because my wrestling is good. If it does go there, I think I am well prepared to deal with her skills.”

“After the loss, I was back straightaway, I set out for a goal and I’m hoping to bring a world title home. I know I can do it. I really have nothing to be ashamed of.”

“I’m really proud that this fight has gotten the recognition I think it deserves because it’s such a big fight and there’s big repercussions after for whoever wins. There will be big opportunities and I always say once you step in the cage, your life and the outcomes can change so much after. It’s nice to get that respect because I think people take for granted what we do sometimes.”

“I just think stylistically it’s such a good fight. I don’t think it’s about the No. 1 spot in Ireland. That’s not really my goal. My goal obviously is to be a world champion.”

“I’ve always said as an amateur world champion, it’s my destiny to be a professional world champion. No matter what path, whatever happens or which way it goes, it’s inevitable. But I definitely think I should be given that opportunity if I get past Sinead. Who else is in that position in our division who has that kind of winning streak? I think I would be deserving of the title shot.”

“In regard to my skillset, it’s like you can watch me and it doesn’t look marvelous but it’s only until you’re in there. I think it will be the same on Friday. I put pressure on guys and I bring the pace. I dictate. I just bring them into my world and they’re reacting to me.”

“This is another tough fight. Tounkara is 7-2. This will be his tenth fight. This will be my fifth. So he’s got twice as many fights. But I think I’m probably more experienced. I don’t know much about his amateur career, but I’ve been doing it a long time. I stayed amateur for over 20 fights. I think I’ll have that on him. He’s a tough lad and I’m looking to show more of my skillset. I’ve improved bigtime since the last fight.”

“I cannot wait. I can guarantee you one thing, there isn’t a more excited fighter this week than myself. I cannot wait to make that walk.”

“The traveling has a benefit too. You get to fight and see the world, somewhat.  But nothing beats fighting at home, that’s for sure. I’m going to embrace every step and like I always do, fight with everything I have.”

“This is something you’re going to bring to your deathbed. It’ll be one of the last things you think of, walking out in front of a sold out 3Arena. This is the Mecca of European MMA and we’re all privileged to be fighting here.”

“I asked for Jornel, very simply because he’s a good fighter. He’s a great fighter. Very technical. Good on the feet – the way he switches from southpaw to orthodox. Good grappler too. He’s a mixed bag but a very technical guy and we can expect a hell of a fight. This is the two best strikers in the bantamweight division fighting each other. Whether or not it’ll be a striking matchup, I’m not sure, but we’ll see Friday night.”

“I am extremely proud to be an Irishman. If I’m not studying fights, I’m studying Irish history. I could be a historian at this point. To represent the people who fought for us when they didn’t have a choice- I have a choice. I get to walk out in front of 10,000 people and engage in unarmed combat. But these people done it for us, so for us to be Irish fighters after them means the world and I carry that with enormous pride.”

“This is for all the marbles, and you can be damn sure I’m going to fight for every inch in there on Friday night.”

“No pressure, this is the same thing I’ve been doing since I was a kid.”

“The usual Brian Moore has a tough gritty style where he just keeps coming forward, with his head down and ready to scrap. He has to show out on Friday for his country. I think Brian’s had a good career, I think his record doesn’t reflect how good he is. When I do beat him, I think it will be a good win for me. If you look at his fights, everyone has had a tough time.”

“I make adjustments when I’m in the cage. I might switch stances, I may stay the same, it just depends on what I feel in there.”

“If I fight three more times, maybe the tournament will be done by that time, and I can fight the winner or the runner-up.”

“I like this lifestyle, I get to train, then go home to my family. I have a lot of freedom when I’m not preparing to get in the cage.”

“I’m super, super excited just to get in there and just show the world what they were missing because I feel like personally the last fight was a bit of an unfortunate one performance wise. Take nothing away from my opponent who beat me fair and square, but I want to go in there and right that wrong. I truly believe that I’m definitely a top 10 fighter in this division. It’s just about going out there and proving it.”

“The last two times I fought I felt like they were my not-so-good performances and ironically, what they both had in common was that there was no crowd there. I feed off that. I enjoy that whole pressure of the crowd being there. I think it’s going to be a big help come Friday night. I’m super excited to get in there and just feel the energy of the crowd.”

“Kakhorov is a very stiff test. He’s someone that has not been looked over in camp. He’s someone who has a very good record on the European scene. Very heavy-handed, has got some stoppages. We’ve done our homework on him and we know it’s going to be a tough, gritty fight. But if I turn up on the night I know I can get the job done.”

“I feel very excited, I am looking forward to the fight on Friday. I am here for myself and not for my opponent. I have just been building on everything I’ve done in the past and I am improving everywhere.”

“I am looking forward to opening the card and getting everyone in the door early, I will make sure the place is buzzing before we hit the main card.”

“At the start it was more difficult to transition from jiu-jitsu to MMA, but now my mindset is on the full skill set and improving everywhere.”

“There isn’t too much out there on my opponent, but it’s more about just focusing on myself. I respect him, he definitely has some skills that I will need to take care of.”

“The experience of all this is good for my career, whether it’s media, weight checks, all this is important to my growth. All of Conor’s camps have been a great experience for me, I mean look around, there are cameras everywhere, I’m ready for the big stage. I feel comfortable everywhere.”