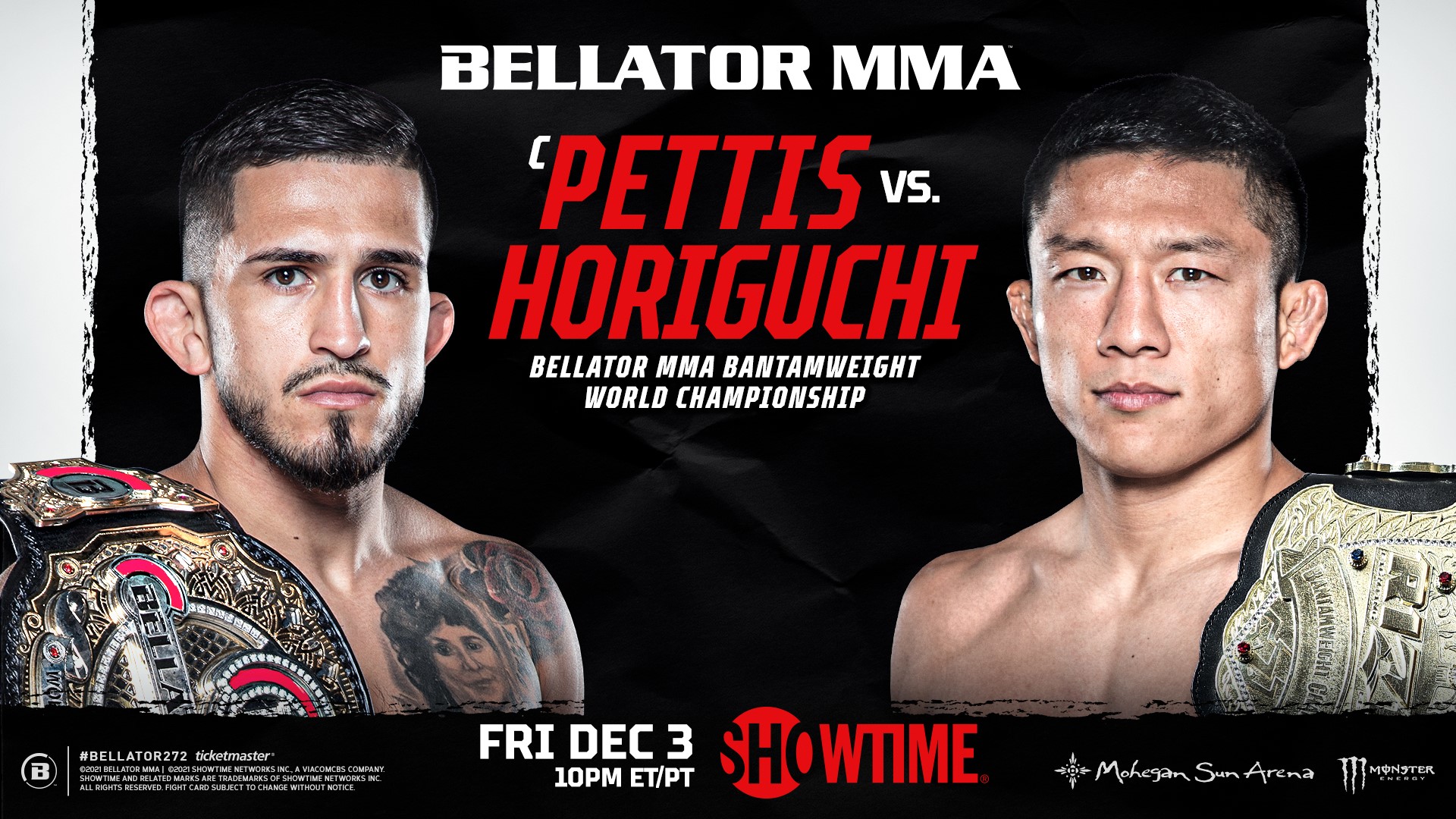 LOS ANGELES (October 20, 2021) – It’s the most wonderful time of the year as BELLATOR MMA rings in the holiday season with BELLATOR Bantamweight World Champion Sergio “The Phenom” Pettis (21-5) defending his belt for the first time in an international clash against former BELLATOR 135-pound titleholder and current RIZIN champion Kyoji “The Typhoon” Horiguchi (29-3) at BELLATOR MMA 272: Pettis vs. Horiguchi on Friday, Dec. 3.

Tickets for BELLATOR MMA 272 will go on sale Friday, Oct. 22 at both Ticketmaster.com and Bellator.com, with a special presale taking place Thursday, Oct 21.

Two additional action-packed preliminary matchups have also been announced with a featherweight feature between Hawaii’s Keoni Diggs (9-1) and John “Platano” de Jesus (14-9) as well as a bantamweight battle between “Gentleman” Josh Hill (20-4) and Jared “Psycho” Scoggins (10-1).

“It’s always a special event when you have a champion versus champion fight,” said BELLATOR President Scott Coker. “I’m excited to have Sergio Pettis and Kyoji Horiguchi competing for the BELLATOR World Championship on Dec. 3. Having a strong working relationship with RIZIN has led to many strong fights between our promotions and I foresee this continuing as we look ahead to 2022.”

Pettis captured the BELLATOR bantamweight crown this past May at the Mohegan Sun by outpointing former champion Juan Archuleta in a fast-paced contest at BELLATOR 258.

After signing with BELLATOR MMA in October 2019, the Roufusport MMA Academy-standout made his successful promotional debut three months later when he recorded a first-round technical submission via guillotine choke over Alfred Khashakyan at BELLATOR 238.

Fighting out of Milwaukee, Wisc., the hard-hitting Midwesterner returned to the cage one-half year following his initial BELLATOR MMA outing and tallied a close, unanimous decision over Ricky Bandejas in the main event of BELLATOR 242 on July 24, 2020.

Hailing from Takasaki, Japan, the 31-year-old Horiguchi is the reigning RIZIN bantamweight champion who notoriously became a simultaneous, two-promotion champion in 2019 after taking down and upsetting then-BELLATOR champion Darrion Caldwell at Madison Square Garden. Unfortunately, an injury would force Horiguchi to relinquish his BELLATOR title in Nov. 2019 and he now looks to reclaim his belt at BELLATOR 272.

While with RIZIN, the American Top Team-product amassed an impressive 10-1 promotional mark, highlighted by eight finishes and five first-round knockouts. Additionally, more than half of Horiguchi’s career victories (15 of 29) have come via KO.

Now, after reclaiming his RIZIN bantamweight strap and avenging only his third loss in 32 outings with a highlight-reel, opening-round knockout over Kai Asakura on New Year’s Eve 2020, the Japanese sensation fighting out of Coconut Creek, Fla., aims to get his hands back on BELLATOR’s title.

Additional bouts for BELLATOR MMA 272: Pettis vs. Horiguchi will be announced in the coming weeks.