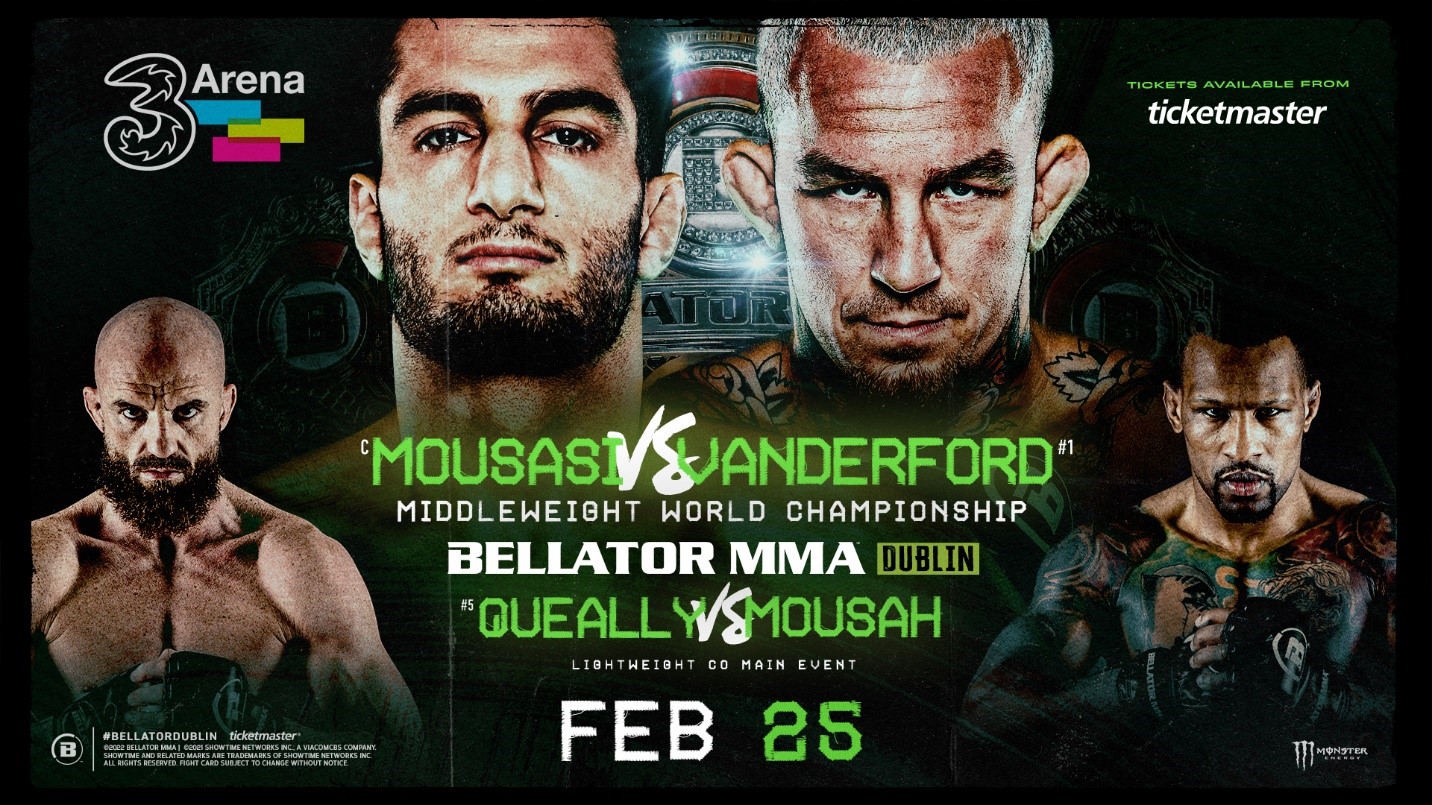 Tickets for BELLATOR DUBLIN: Mousasi vs. Vanderford go on sale Saturday, Dec. 18 and can be purchased at Ticketmaster.ie and Bellator.com with a special presale taking place starting Friday, Dec. 17.

The co-main event sees Irish star and #5-ranked lightweight Peter Queally (14-5) return to action against Manchester, England’s Kane Mousah (13-4), as he looks to rebound from his recent title challenge at BELLATOR 270 last November.

In addition, a pair of lightweight contests are confirmed for the event, when Charlie Leary (17-11-1) takes on Davy Gallon (19-7-2) and Junior Morgan (3-0) faces Darragh Kelly, who’s 9-0 as an amateur and will be making his professional debut on Feb. 25. Fellow home favorite Brian “The Pikeman” Moore (14-8) is also set to compete on the card with his opponent yet to be confirmed.

Broadcast details and additional fights, including a host of Irish talent, are set to be announced in the coming weeks.

A two-time BELLATOR MMA Middleweight World Champion, Mousasi enjoyed his first reign in 2018, winning the title against Rafael Carvalho and defending it against Rory MacDonald, before losing a thrilling match-up to Rafael Lovato Jr. The Dutchman reclaimed his title in a huge clash with former welterweight champion Douglas Lima in October 2020 before another successful defense against John Salter in August 2021. Currently ranked fourth in the BELLATOR pound-for-pound rankings, Mousasi will be looking to produce fireworks in front of a packed 3Arena crowd.

Austin Vanderford has quickly established himself as one of the best middleweights on the planet, boasting an 11-0 career professional record. Since signing for BELLATOR in 2019, he is undefeated in five bouts, including a thrilling unanimous decision win over Fabian Edwards earlier this year at BELLATOR 259. The #1 ranked American Top Team product will look to emulate his training partner and reigning welterweight champion Yaroslav Amosov by becoming a BELLATOR world champion in his first attempt.

Queally meanwhile, who is currently ranked #5 in the lightweight division, will look to use the might of the home crowd to help him secure a decisive win over Mousah. Queally will be looking to bounce back from a heartbreaking title fight defeat to Patrick “Pitbull” Freire in front of the same Dublin crowd at BELLATOR 270 in November. The SBG standout is known for his exciting style and electrifying walkouts and will be looking to climb the lightweight rankings again and put his name back into title contention with a dominant victory.

After more than 18 months away from the 3Arena, BELLATOR’S return to the iconic Dublin venue twice in the space of four months is sure to be met with delight from the loyal Irish MMA fans. With another title on the line and one of the most iconic names on the BELLATOR roster in Gegard Mousasi competing at the top of the card against the #1 ranked competitor in Austin Vanderford, it promises to be a night to remember in the Irish capital. If Queally secures his comeback win in the co-main, it will become one of the great nights in Irish MMA history.