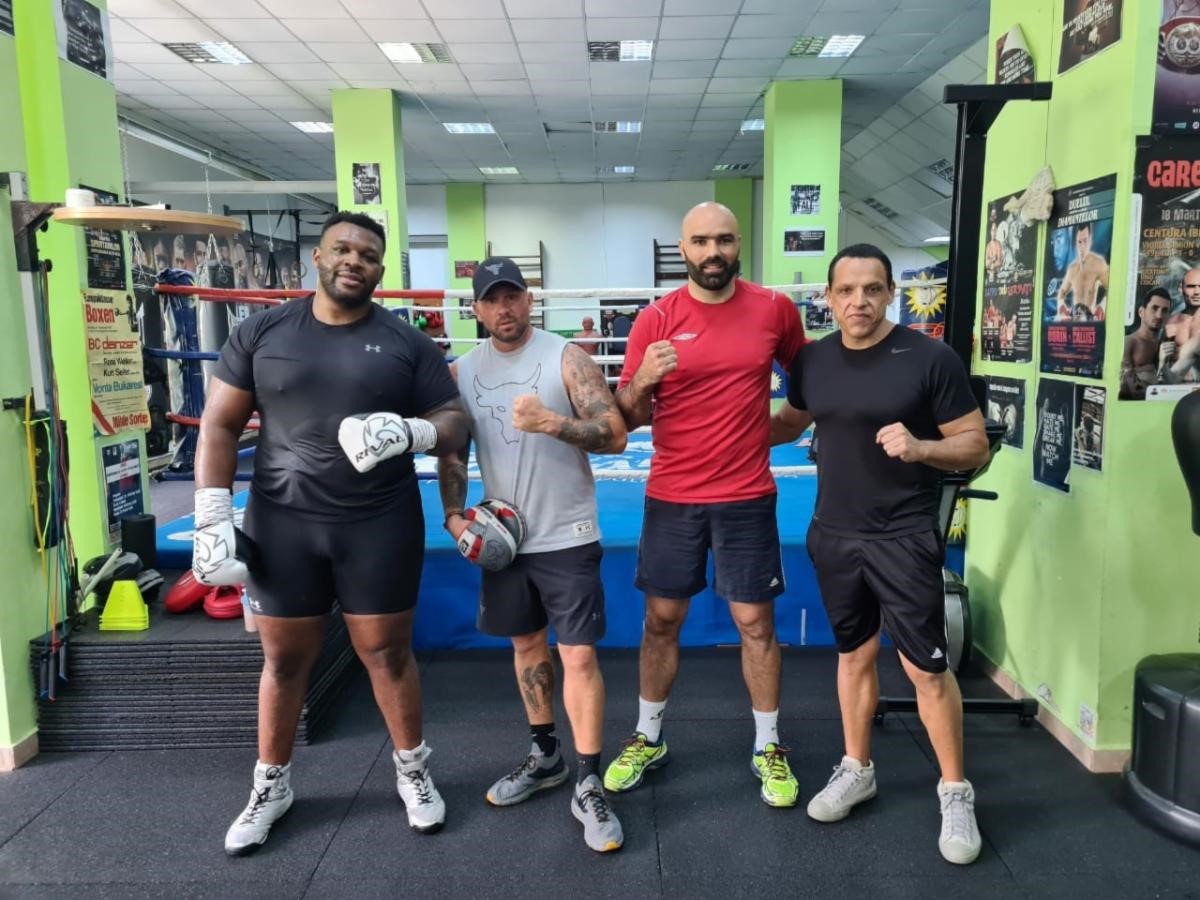 (May 18, 2021) Heavyweight contender Bogdan Dinu is training hard in his hometown of Buzau, Romania, and getting some excellent sparring work from former foe Jarrell “Big Baby” Miller as he prepares to face Daniel “Dynamite” Dubois for the Interim WBA World Heavyweight Championship.

The 6′ 5″ WBA #2-rated Dinu (20-2. 16 KOs) will face the 6′ 5″ WBA #11-rated Dubois (15-1, 14 KOs) of Greenwich, London, United Kingdom, on Saturday, June 5. An upset victory over the heavily hyped Dubois will put Dinu one step away from realizing his dream of becoming the first Romanian heavyweight champion of the world.*

Joining the 34-year-old Dinu in camp are his brother George, co-trainer Ross Woolgrove and strength and conditioning coach Daniel Ortega. And this week, to provide world-class sparring, is well-known heavyweight contender and promotional stablemate Jarrell “Big Baby” Miller, who stopped Dinu in four rounds in 2018. The pair have remained friends.

“I am training in my home city in my own gym,” explained Dinu between workouts. “I have everything I need here and it’s going really good with Jarrell. He’s one of the most dangerous heavyweights in the world. He puts on a lot of pressure and that’s good for me to prepare for this fight. It’s an important fight and I must win!”

Dinu says he’s working on a surprise for the vaunted 23-year-old Dubois, who was considered a red-hot prospect before coming up short against fellow undefeated Brit Joe Joyce last November for the WBC Silver, WBO International, EBU European, Commonwealth (British Empire) and BBBofC British Heavyweight Championships. In the press, pre-fight, Dubois has been promising to knock Dinu out and return to the fast track.

“I see a young heavyweight who likes to fight, but has only faced easier opponents,” Dinu observed about Dubois. “His only tough fight was against Joe Joyce and we saw what happened. You’ll see by the result of our fight that his big reputation is exaggerated. He’s promising to knock me out? He’s just saying words because he hasn’t met me yet. He will have a big surprise when he looks in my eyes, just as tall as he is and not afraid of him at all. I am going to be very well-prepared and I have a lot of surprises for this kid.”

Dinu last fought in October 2020 with a second-round stoppage of German veteran Frank Bluemle in October 2020. His promoter, Greg Cohen, founder and CEO of Greg Cohen Promotions, says his fighter will be a different man when he shows up for battle on June 5.

“Bogdan Dinu has only lost to two of the top contenders in the division in Miller and Kubrat Pulev and he really should have won the Pulev fight,” said Cohen. “Bogdan is a very smart, experienced, tough guy with a great amateur pedigree and I don’t think Daniel Dubois is ready for someone with his world-class skills and experience. Dinu is working every day in camp with Jarrell, who is pushing him to his limits and taking him to new levels as a fighter. After June 5, Bogdan Dinu will be the interim WBA heavyweight champion in line to face one of the top dogs.”

*The WBA ranks Anthony Joshua as their super champion, Trevor Bryan as their regular champion, Robert Helenius as their gold champion and Manuel Charr as their champion in recess.