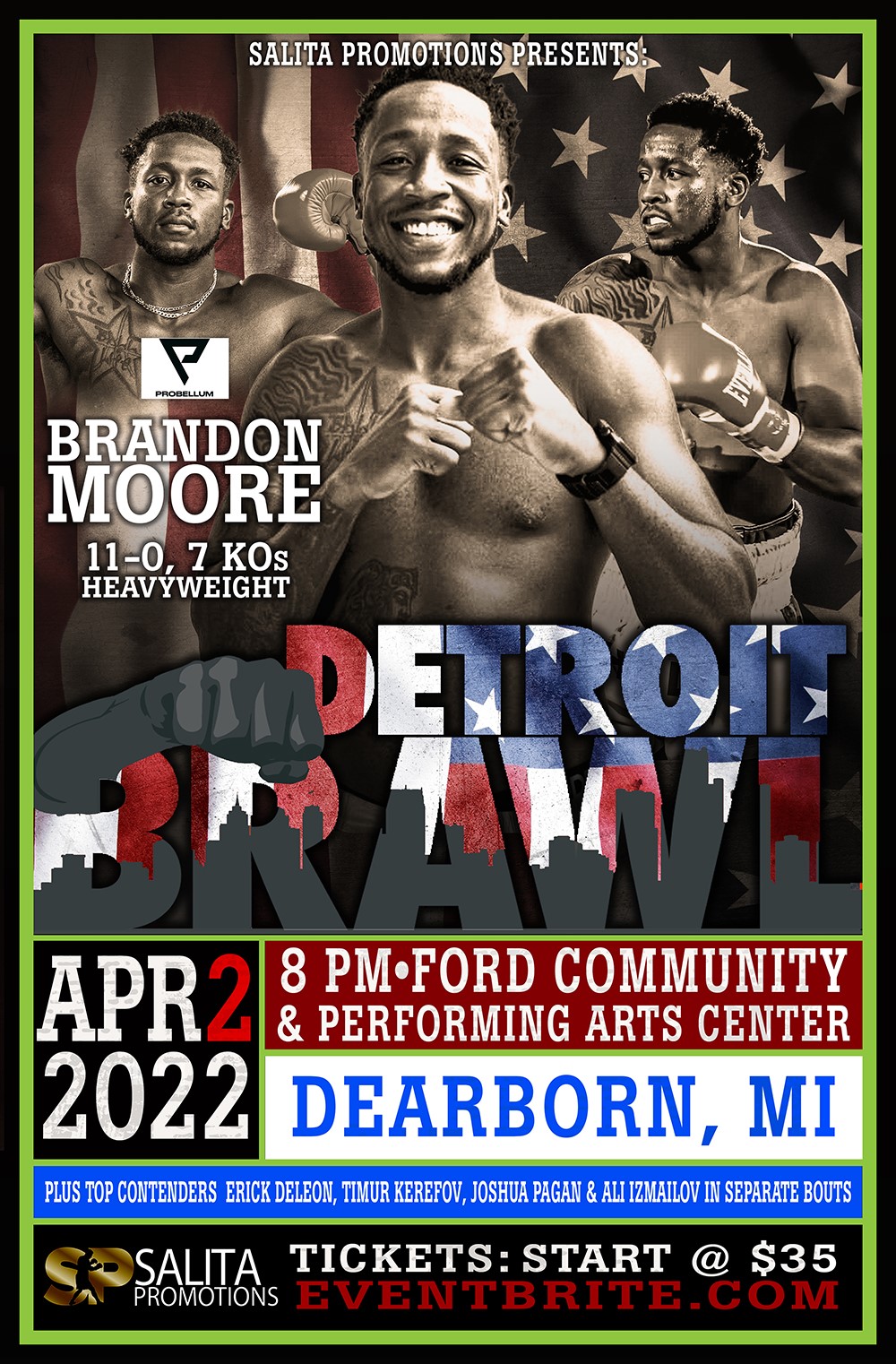 (March 16, 2022) – Undefeated heavyweight prospect Brandon Moore has been added to the bout lineup of Salita Promotions’ next Detroit Brawl event on Saturday April 2, 2022, in the Lincoln Ballroom of the Ford Community & Performing Arts Center in Dearborn, MI.

The current WBC USNBC Silver Heavyweight Champion as a professional, and a former USA national champion as an amateur with several victories over other current professional prospects including unbeaten Dacarree Scott, the 6’ 6” southpaw Moore (11-0, 7 KOs) will appear in an eight-round showdown against divisional gatekeeper Curtis Harper (13-7, 9 KOs).

The two heavyweights will meet in support of the night’s eight-round main event featuring the return of one of Detroit’s own, as undefeated power-punching lightweight contender Erick De Leon (19-0-1, 11 KOs) will return after nearly three years’ absence from the sport due to injuries to face hard-nosed Mexico City veteran Juan Jose “Piquet” Martinez (28-11, 20 KOs).

Tickets for “Detroit Brawl” start at $40 and can be purchased by clicking HERE.

PLEASE NOTE: Tickets ordered online will be placed in will call at the box office for pick-up. A limited quantity of VIP tickets is also available by calling Lina (313.529.7604).

Guided by rising promotional entity Probellum and co-managed by Keith Connolly and Ryan Rickey, Lakeland, Florida’s Moore won his WBC USNBC Silver Heavyweight Championship with a fourth-round knockout over Mexico’s Elvis Garcia in August 2021 and successfully defended it in October of that year with a first-round KO over Mexico’s Jesus Angel Nerio. Moore was last seen in December making quick work of Mexico’s Abraham Pascual via KO 1 in Canadian boxing hotbed Montreal.

“I’m excited to fight in Detroit,” said a happy Moore. “Dmitry Salita is a great promoter and he always has first-class events. Fighting here is like the resurrection of Joe Louis in his adopted hometown. Get ready for a show! I’m the most exciting and energetic heavyweight in the world. April 2, everyone gets to see!”

“Brandon Moore is an exciting new force in boxing’s most glamorous division and the fans are in for a treat,” added Dmitriy Salita. “He’s up against a tough and unpredictable opponent in Harper, who has pulled off a few surprises. I’m happy to be joining forces with Brandon and his team to present another young and powerful force in heavyweight boxing to the great fans in Detroit.”

Kerefov will take on well-respected trialhorse Cleotis “Mookie” Pendarvis (21-9-2, 9 KOs) in an eight-round showdown. The murderous-punching Izmailov’s, as well as Pagan’s opponents are yet to be announced. All bouts are subject to change. The Ford Community & Performing Arts Center is located at 15801 Michigan Ave. in Dearborn. On fight night, doors open at 7:00 pm and the action starts at 8:00 pm.