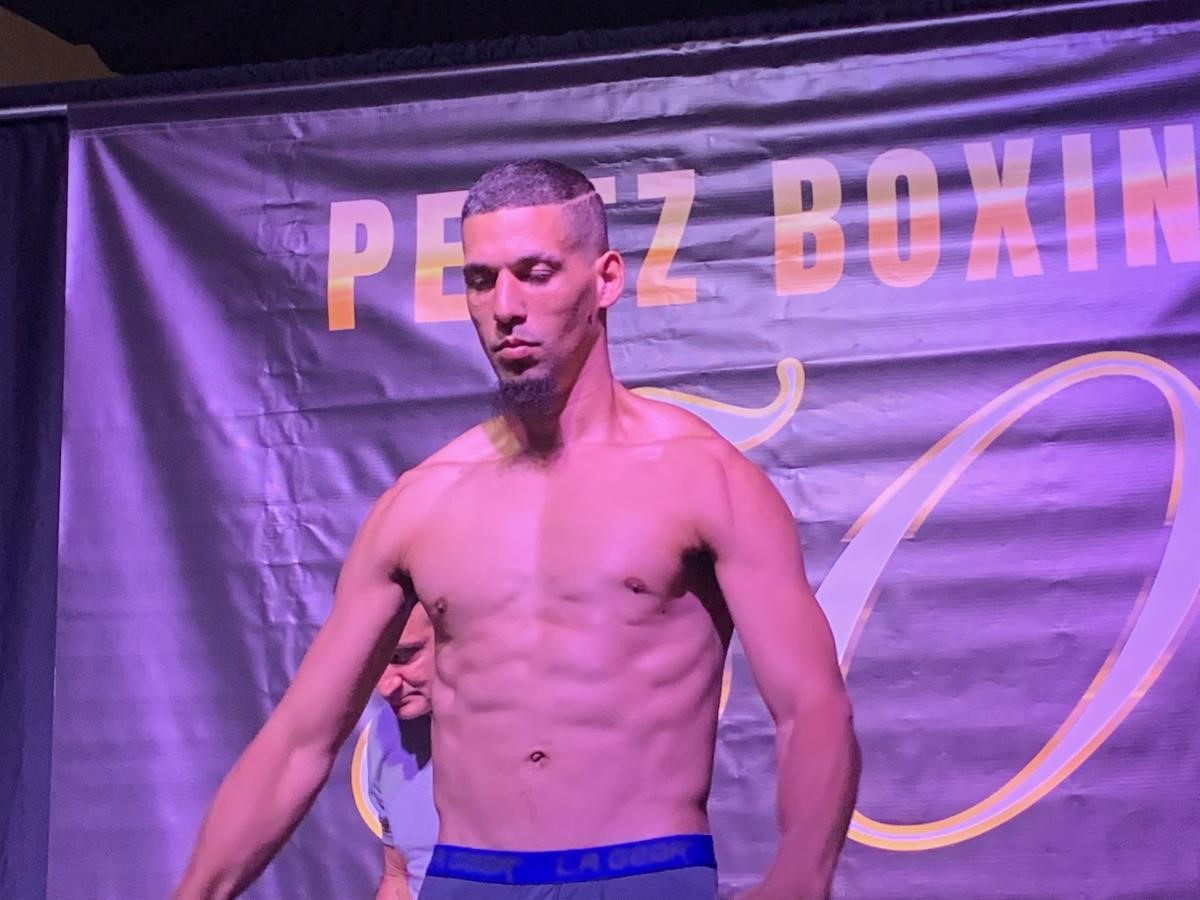 Here is a Q&A with Christopher Burgos for your consideration in previewing the bout.

What got you into boxing?

“As a kid, I just wanted to learn how to fight and I guess build my self-esteem up because I had low self-esteem as a kid. So then I got into boxing, and I got good at it. I did it for a while, but then I got sucked into a dumb life and gave it up. But years later, I came back and took it seriously.”

What do you enjoy the most about boxing/fighting?

“I enjoy how I have to prove to myself that I can actually do a lot more than what I think I can and push myself further than what I thought. I kind of had a lot of doubters in life and they looked at me like I wouldn’t go anywhere in life, and I actually got somewhere.”

Is there current or former fighters that you took pieces of their style from and implemented into your style?

“When I was teenager, I used to love watching Roy Jones. Jr. fight, and I wanted to get more into Roy Jones’s style. But as I got older, I kind of lost that speed, so I started developing a pressure style of fighting. For some reason when I am fighting, the more I actually come forward and battle with the guy, the easier the fight is, and the less you think about what’s happening and the more you stay in the zone with the fight. The more you box and run around, you might lose focus, and the fight gets boring too.”

“I was more into military and law enforcement growing up, but my brother was always into wrestling and stuff. I’m not going to lie. It sounds kind of funny and cheesy since I’m from Philly, but I saw the Rocky movie every year on TV. Then after watching the movies so much, I said why not give it a try and what do you know, the Rocky movies lead me to being a Philly fighter.”

“So far I try to show determination and go against adversity. A lot of the time, most of the guys I have been thrown in against, a lot people said I wasn’t supposed to win. Because of my age or record, I did not have that great of an opportunity. So it’s more like going against adversity and the doubters. I have my son, and I have custody of him, and he is really young, but in a way, I want to show him that things are possible if you fight hard and really try to push through it. Everybody loved the last fight. They gave me ‘Fight of the Year’ for the Briscoe Awards, and the fight before that, I stole the ‘Fight of the Night’ even though I was not the main event. So pretty much since I put on action packed fights and people like it, I figure I’ll work harder on being more of an action packed fighter. Nowadays, what people want to see is a lot of punches being thrown, bleeding or getting hurt. So I don’t want to get hurt, but at the same time, I love the action. Everybody loves the action so I try to bring action packed fights.”

What are your hopes and dreams for your future in fighting?

“My only 3 goals in this sport have been hopefully to make enough money to buy a nice house with at least one fight, and not be fighting to pay it off. Second one would be to buy another house for my mom, if possible. And I would say the last one is like the first one and it would be to inspire my son to go for what he believes in and if he wants to push hard, he can make it happen.”

Who are your biggest supports outside the ring?

“I’m very thankful for the support because you know I kind of screwed up a lot in my life. So my mom never gave up on me, and she told me to keep trying for the best and one day you’ll find something. I appreciate everybody’s support. I was never used to getting a lot of support so in my mind, it’s just more about how I feel about myself or what I accomplish. I am really thankful for my girl and everyone that has been around. And the main one I appreciate is my coach. If it wasn’t for him, it wouldn’t have been possible. He helps me, he calls me, he checks up on me like we’re family. I’m really thankful for his support more than anybody because he is one of the guys that saw something in me when what others saw in me was another old guy trying to do something.”

What did it mean to receive the Briscoe Award for “Philly Fight of the Year” and were you expecting it?

“I wasn’t expecting it at all. I didn’t even think that was possible. I don’t see myself as a famous guy. I never tried to be famous. I just wanted to make a nice living. I was really excited and surprised when they gave it to me, and my family, my girlfriend and all my friends were happy for me. Then after I got it, I’m kind of nervous too. I can’t mess up, and I have to try really hard. I know there are a lot of fighters that are looking at me because of that award, and now I have to really step my game up to live up to that award.”

What does it mean to have your son in your life and how has it affected you?

“What it means to me is to show him hard work and dedication. What I’m hoping when he gets older when he finds something he likes or loves in life, he will work and put the effort in. When people tell him he can’t, he will still go for it and not let anyone tell him what to be in life and not be lost in this world and try to figure out what to do.”

Why did you choose to train where you do?

“My coach has been with me from my whole pro career and my last few amateur fights. I joined the gym when I was 24 and there was a coach there, and he wasn’t a real coach. He only had one amateur fight, and I heard he lost it because he was scared. I started to find things out about this guy, and the way he was training us was kind of crappy. Another coach came in who did boxing in the army, but he was more a physical trainer than a boxing trainer and he didn’t care too much about what happened. He just wanted to do it as a hobby and to entertain himself. He didn’t really care for the fighters so much. Time went by and then I came across Rickie Diaz and Miguel Perez. Those two saw something in me and they work with me even through all the bad habits I have and all the mistakes I was making. They saw if they gave me a command, I would follow it. And when it came to getting in shape, they knew I was running everyday so there was no need to keep track of me on exercise. If they told me to push forward, I would push forward. I really appreciate my two coaches because they saw I did not give up on them, and they never gave up on me. I would bust my back for them and they would do the same thing for me.”

“To actually look in the mirror and look at yourself and know you put the effort in, and to feel like you did something instead of feeling like you wasted something with yourself.”

The live boxing event, which is produced in partnership between Joe Hand Promotions and Russel Peltz, will feature a six round heavyweight bout between Sonny Conto (8-0, 7 KOs) out of Philadelphia, PA going up against Mike Marshall (6-2-1, 4 KOs) fighting out of Danbury,

Super lightweights Christopher Burgos (3-4-1, 1 KO) of North Philadelphia, PA will battle Carlos Marrero (2-6-3) out of Bridgeport, CT in a six round bout.

Another bout on the card is a six round featherweight contest between Justice Bland (5-1, 2 KO’s) out of Brooklyn, NY going up against D’Angelo Fuentes (6-0, 4 KOs) fighting out of Coconut Creek, FL

Also on the card is a four round lightweight bout featuring Jordon Murphy (1-0, 1 KO) out of Deerfield Beach, FL going against Nasir Mickens (2-0, 1 KO) out of Philadelphia,