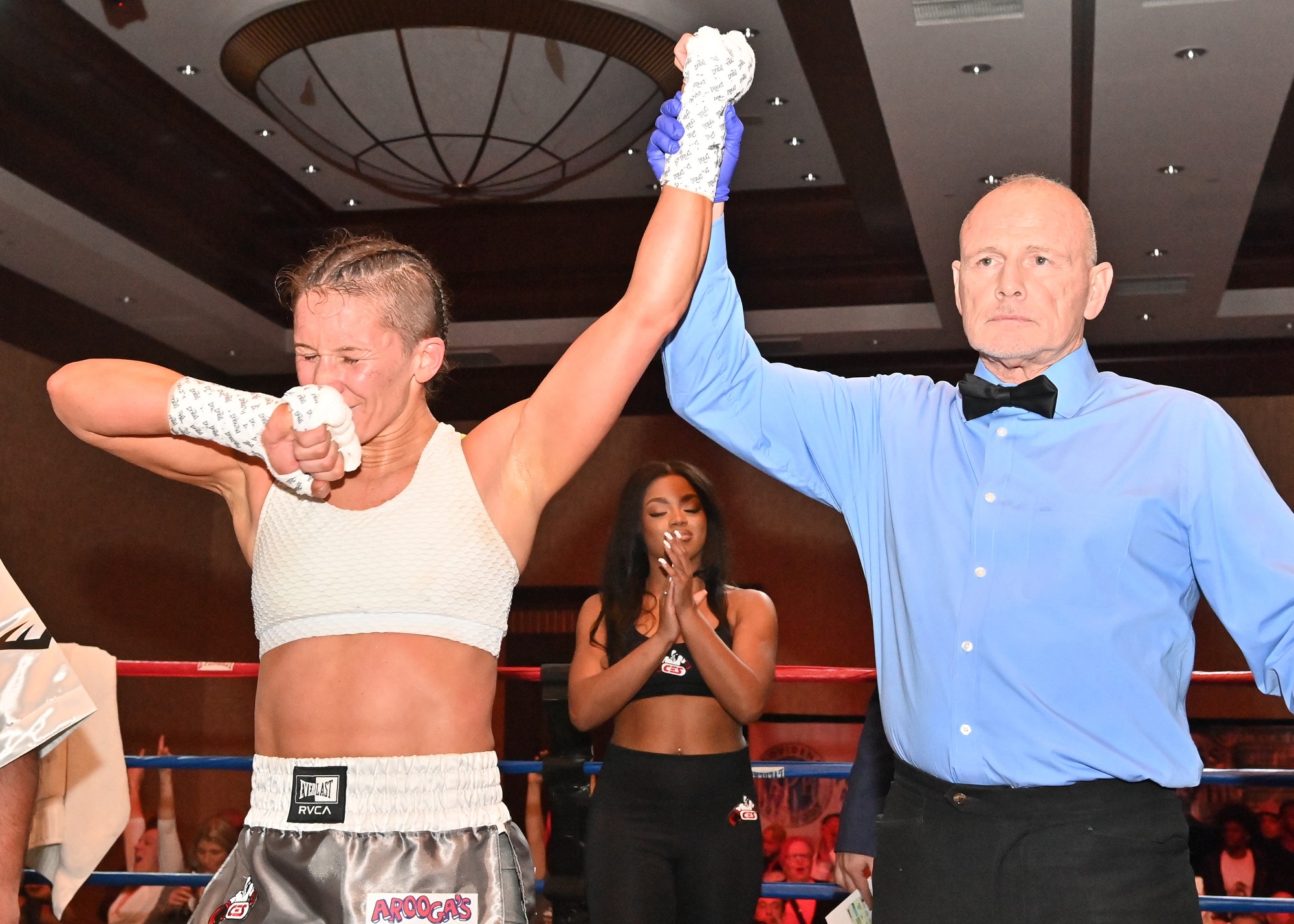 The 45-year-old Clampitt (23-5-2), a Warwick, RI, resident who came out of retirement last summer two years after being inducted into the International Women’s Boxing Hall of Fame, headlined CES Boxing’s 2022 debut and its inaugural event at the Crowne Plaza.

Flanked by longtime promoter Jimmy Burchfield Sr., CEO and president of CES Boxing, Clampitt capped the event – appropriately titled “Rhode Wars” – in front of a sold-out crowd with a dominant performance against Wabik (4-2-2), who, despite continuing to come forward the entire fight, could not thwart Clampitt’s experience and ring savvy.

The victory, scored 60-54 on all three scorecards, was Clampitt’s first since 2013 when she defeated Dominga Oliva.

In addition to opening its newly-launched fight series in front of a capacity crowd at the Crowne Plaza, CES Boxing celebrated an even bigger victory Friday when lightweight star Jamaine Ortiz of Worcester, MA, captured the NABF title in Orlando with a unanimous decision win over Nahir Albright in the main of Showtime’s ShoBox: The New Generation telecast. With Clampitt back in the picture among female lightweights and Ortiz putting his entire weight class on notice in Friday’s win, CES Boxing is poised for a groundbreaking year as the sport continues its rise in popularity.

In other action Saturday, super lightweight Wilson Mascarenhas (5-1, 2 KOs) earned his fifth consecutive win and his second consecutive by knockout, stopping Virginia southpaw Akeem Jackson (5-5) in the third round of their scheduled six-round bout.

Since losing his pro debut in 2018, Mascarenhas has been on a roll; he earned his first knockout win last summer at Cranston Stadium against Geoffrey Then and continued his winning streak last night, chopping down the much taller, lankier Jackson with body shots.

Making his United States debut, Italian middleweight Nicola Quarneti (5-2-1) got off to a slow start and lost a technical decision to Yakima, WA, veteran Charon Spain (4-18-2) when the fight was stopped after three rounds due to an accidental headbutt. Spain won the first two rounds before Quarneti found his footing in the third, using his jab to set up a potent left hook.

As Quarneti began applying pressure toward the final bell, the two butted heads, opening a severe cut above Spain’s left eye. The ringside physician stopped the fight and, since the fight had gone past the halfway point, the decision was left in the hands of the judges, who ruled unanimously in favor of Spain.

In the opening bout of the evening, bantamweights Dan Cormier (2-0) of East Providence, RI, and Christian Andrade (1-1) of Fairhaven, MA, put on a show for four rounds with Cormier winning by majority decision, 40-36, 40-36, 38-38. A former mixed martial arts fighter, Cormier has now won twice as a pro in boxing since debuting in August.

CES Boxing returns to the Crowne Plaza on March 26 with “Rhode Wars 2.” Visit CESFights.com for more information. Updates on CES Boxing can also be found on Facebook in addition to Instagram and Twitter by following @CESBoxing.