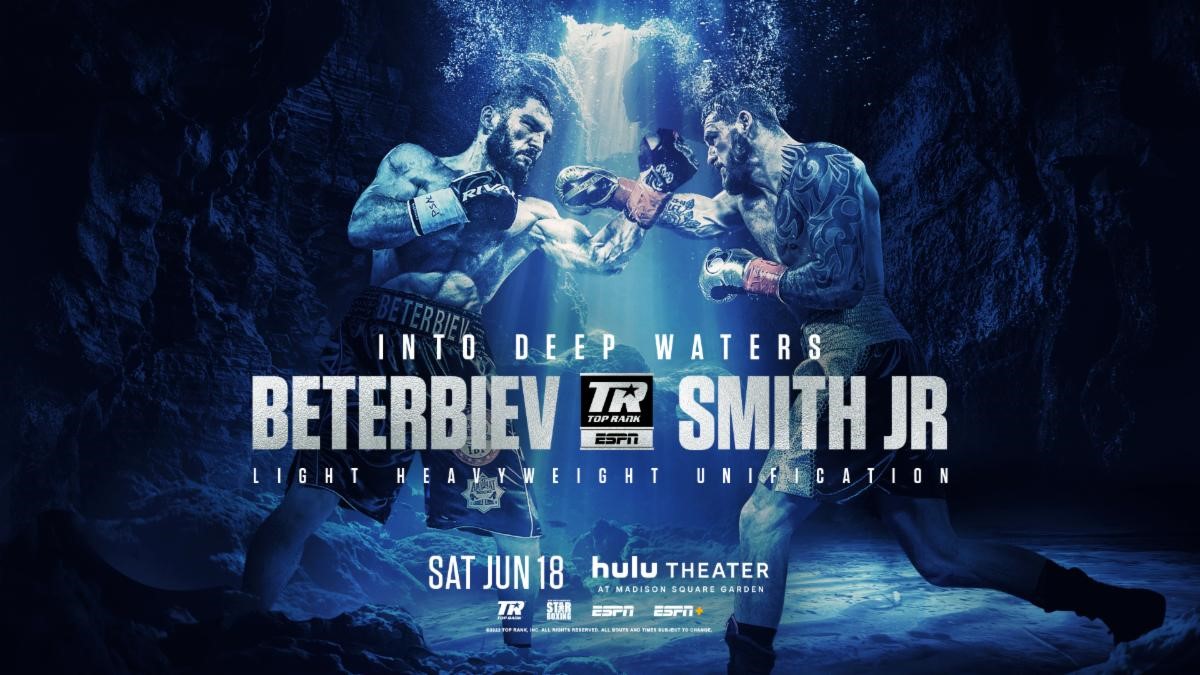 Beterbiev, boxing’s only world champion with a 100 percent knockout rate, hopes to pick up another strap against “Cinderella Man” Smith, a Long Island native who grew up about 70 miles from Madison Square Garden.

Promoted by Top Rank, in association with Joe DeGuardia’s Star Boxing, tickets starting at $56 go on sale Friday, May 6 at 12 p.m. ET, and can be purchased by visiting Ticketmaster.com or MSG.com.

“Beterbiev versus Smith is one of the very best fights that can be made in boxing, two huge punchers fighting at Madison Square Garden in what will be an electric atmosphere. Whoever comes out on top will be the true king of the light heavyweight division,” said Top Rank chairman BOB ARUM. “Robeisy Ramirez has developed into a sensational pro, and he will have his hands full against a tough, undefeated kid in Abraham Nova. The winner will be in line to fight for a featherweight world title.”

“I am thrilled we were able to put this sensational championship unification fight together,” said JOE DEGUARDIA, President of Star Boxing. “The top two punchers in boxing fighting each other for their three world titles. It has been brewing for a long time and is a potential fight of the year. Joe Smith Jr. is proud of his humble background and hard-working union ‘Common Man’ moniker, but he is also truly special and a real champ. He could have chosen an easier path, but he wanted the best and toughest out there, the guy everyone is afraid to fight. Credit to both champions, each fighting the toughest, hardest-punching and most dangerous foe the division has. I can’t wait to see this fight!”

Beterbiev (17-0, 17 KOs), a two-time Russian Olympian, has spent his nine-year pro career based in Montreal, Canada. He has been a world champion since knocking out Enrico Koelling for the IBF strap in November 2017. He’s won five title fights inside the distance since then, including an off-the-deck victory over Callum Johnson and a title unification classic versus Oleksandr Gvozdyk in 2019. Beterbiev went 2-0 in 2021, capping the year with December’s brutal ninth-round stoppage over longtime contender Marcus Browne.

“I look forward to the challenge ahead of me. Joe Smith Jr. is a worthy champion, but I am coming to Madison Square Garden to add another world title to my collection,” Beterbiev said. “This fight will get me one step closer to becoming undisputed champion.”

Smith (28-3, 22 KOs) earned mainstream recognition with his 2016 knockout of living legend Bernard Hopkins and scored standout wins over Jesse Hart and Eleider Alvarez in 2020. In his second world title attempt, he outlasted Maxim Vlasov in a 2021 Fight of the Year Contender. Smith successfully defend his world title in January with a ninth-round stoppage over late replacement Steve Geffrard.

Smith said, “I am extremely excited and focused on this task I have ahead. Facing Beterbiev is huge. It is going to be a fight that fans remember forever, with two of the biggest punches in boxing today facing off. This opportunity is a dream of mine to accomplish. Fighting with three titles on the line is one step closer to becoming undisputed.”

Ramirez (9-1, 5 KOs) has been on a sterling run since a shocking loss in his August 2019 professional debut. An Olympic champion in 2012 and 2016, Ramirez is coming off one-sided victories over the unbeaten Orlando Gonzalez and Irish veteran Eric Donovan. Nova (21-0, 15 KOs), who spent much of his career at junior lightweight, has been flawless since moving up to the featherweight ranks. Born in Puerto Rico and raised in Albany, New York, Nova knocked out William Encarnacion in eight rounds on the Smith-Geffrard undercard in January.

Ramirez said, “I have always wanted to display my talent on a stage as important as the iconic Madison Square Garden in New York City. Come June 18, I will not only take advantage of this big opportunity, but I will also hand Nova the first loss of his career. I’m going to take a big leap in my quest to become world champion, and above all, showcase my class and give boxing fans another great performance. I will make clear that ‘El Tren’ is a true powerhouse in the featherweight division.”

Nova said, “Robeisy is a great talent, and he’s the fighter that will get me to that next level. I need a statement victory. Beating a two-time gold medalist puts me right in the title picture. The better the competition, the better I look. Nobody has seen the best of me yet, and I will show that on June 18.”

The undercard, which will stream live and exclusively on ESPN+, is scheduled to feature many of the sport’s rising superstars. In six-round bouts, Brooklyn-born featherweight puncher Bruce “Shu Shu” Carrington (3-0, 2 KOs) and Long Island welterweight Jahi Tucker (7-0, 4 KOs) hope to extend their unbeaten records. U.S. Olympian Troy Isley (5-0, 3 KOs), fresh off his knockout win on the Oscar Valdez-Shakur Stevenson undercard, returns in a six-round middleweight bout. Featherweight Kurt Walker (2-0, 1 KO) and junior middleweight Kieran Molloy (1-0, 1 KO), both of whom starred for the Irish national team as amateurs, will make their respective U.S. debuts.