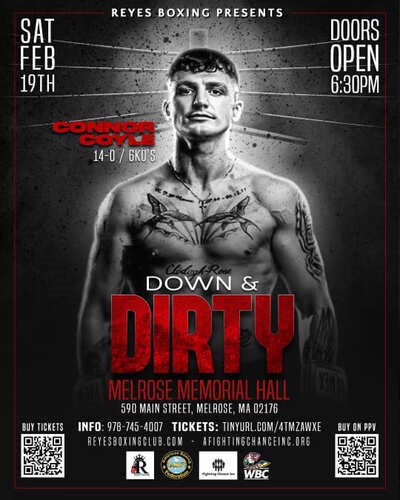 Coyle, who is from Northern Ireland but trains in St. Petersburg, FL, is 14-0 with 6 of his victories coming by knockout.

The 31-year-old was slated to face rugged contender Guido Nicolas Pitto of Argentina but he was forced to withdraw.

Since suffering his only career defeat, Lopes, 8-1 (7 KO’s) has been in the gym working on his craft. Team Lopes claims their boxer will be a totally different fighter than the one previously seen since he’ll be competing as a full-fledged middleweight rather than a weight drained welterweight.

The eight round Coyle-Lopes matchup is for the ABF Continental Americas Middleweight title.

The bout serves as the co-main event of Reyes Boxing’s “Down & Dirty”. Presented by Reyes Boxing, tickets for

“Down & Dirty” are on sale now by going to Tinyurl.com/4TMZAWXE. The card will also be broadcast on Throwdownsports.com. More information is available by calling 978-745-4007 or going to ReyesBoxingClub.com.

Doors open at 6:30 and Melrose Memorial Hall is located at 590 Main St.

Headlining this exciting evening of boxing is an international super middleweight battle featuring 2012 Olympic medalist Yamaguchi Falcao of Brazil and Fernando Ezequiel Farias of Argentina. Falcao and Farias are a combined 29-2-3 and will battle it out over 10 rounds for the WBC Latino 168 pound title.

Junior welterweight Joseph Fernandez of St Petersburg, FL by way of Springfield, MA fights for the first time in The Bay State when he meets Gonzalo Dallera in an eight rounder. Fernandez is 14-3-3 with 5 KO’s and is coming off an impressive 3rd round KO of Jose Forero. Dallera hails from Argentina and is a veteran of 24 fights.

All fights are subject to change.

“We’ve got a nice mix of local boxers and world class global talent on this card,” said Michael Reyes of Reyes Boxing. “The Boston region has a large Irish and Brazilian population, so there should be strong support for Connor Coyle and Yamaguchi Falcao as well.”