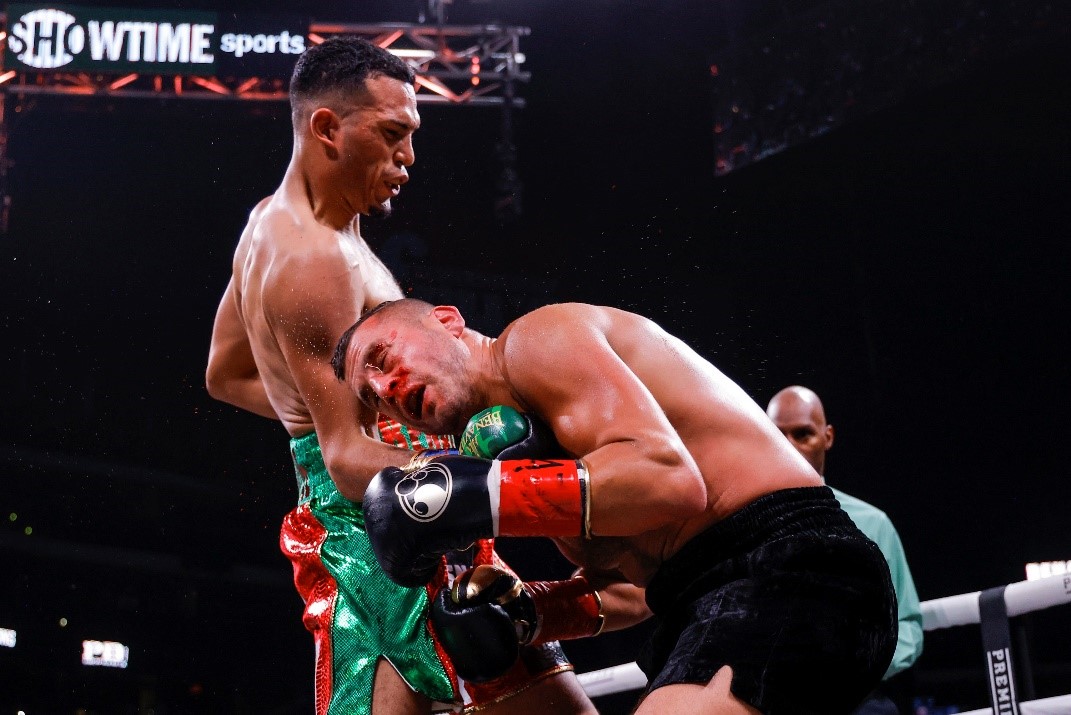 Benavidez (26-0, 23 KOs) beat and battered a gutsy Lemieux (43-5, 36 KOs) from the opening bell knocking him to the canvas for the fifth time in his career midway through the second round on a massive uppercut that nearly sent Lemieux through the ropes. Lemieux somehow survived the onslaught of Benavidez’s power punches and returned to action in the third round. But Benavidez went right to work dishing out more and more punishment as Lemieux’s corner stepped in and signaled surrender to referee Harvey Dock, who waved off the fight with 1:31 remaining in the third round.

“Mike Tyson gave me the name ‘The Mexican Monster’, what do you think I’m gonna do?” Benavidez told Jim Gray after the fight. “I just feel like I’m the strongest 168 pounder. No one can mess with me.”

Benavidez staggered Lemieux in the closing seconds of round one, the big blow a left hook that sent Lemieux into the ropes with Benavidez pouncing with a 10-punch combination of uppercuts, hooks and straight jabs. Dock later said he was about to stop the fight had the bell not rung to end the round.

“Lemieux is a special type of breed,” said Benavidez, who landed 49 percent of his total punches and 52 percent of his power punches. “This guy was swinging until the end. I had to be on my p’s and q’s. He’s a tough champion, so my hat’s off to him. He’s the only one with the guts to face me.”

Lemieux never backed down and told Gray he was impressed with Benavidez. “I’m good, Benavidez is a hell of a fighter,” Lemieux said. “I congratulate him. After the first round I was okay, he had gotten me with some good shots. I tried to come back, but he’s a very good fighter.”

Benavidez said he wants the best the 168-pound division has to offer. “I’m waiting for [Caleb Plant, Jermall Charlo, David Morrell] to sign the contract. Them bitches know what’s up. I’m right here waiting for them. I’ll put myself up against everyone. I guarantee I’m knocking everyone out.

“I can get better everywhere. You can always learn. It only gets better from here. I’m just going to keep working. Facing tough guys like Lemieux just pushes me to keep moving to the next level.”

In the co-feature, hard-hitting Cuban prospect Yoelvis Gómez had his knockout streak ended at five, but still dominated Mexico’s Jorge Cota in a 10-round super welterweight shutout. The scores were 100-90 three times.

Now living in Las Vegas, the 24-year-old Gómez (6-0, 5 KOs) went the distance for the first time in his young professional career. He staggered Cota at times with unrelenting body shots and effective power punches.

“I wanted to steal the show, but I know that all Mexican fighters are warriors, and Cota was a warrior tonight and was able to take me the distance,” said Gómez, who was fighting for the first time with noted trainer Ismael Salas in his corner.

Gómez, the son of an Olympic Gold Medalist, threw almost 100 more jabs than Cota on the night. “I found out today that you have to be ready to go for all 10 rounds,” said Gómez, who had fought just seven rounds in his five pro bouts.  “The knockout didn’t come tonight, but I was conditioned and prepared to go the distance.

“On Monday I’ll start up again with my trainer to see what I can do better in my next my fight. Thank you to all the fans tonight, I love Arizona!”

The 34-year-old Cota (30-6, 27 KOs) said he was hurt by Gómez’s hard-hitting body shots. “The judges’ decision was what it was, it’s pointless to talk about it now. Yoelvis is a strong fighter and he hit me hard on my left rib, I think he hurt me there. I’ll get some x-rays to see what the damage was. He kept up his consistency and his punching power throughout the entire fight. I was at 50 percent after the rib injury, but credit to him for having fought like he did.”

Rising Dominican prospect Luis “The Twist” Núñez danced his way to a unanimous decision over fellow unbeaten Jonathan Fierro in an exciting and close 10-round featherweight bout in the SHOWTIME opener. The scores were 96-94 in favor of Núñez on all three judges’ scorecards.

“I kept my distance, hit him when I had to and built up my equity round by round,” said Núñez. “Now, I’m ready for anybody they want to put in front of me next. Bring them on!”

Núñez, who is promoted by Sampson Lewkowicz, was victorious over his third-straight undefeated fighter. He had won his two previous fights on the popular prospect series SHOBOX: The New Generation®.

It was a fight marred by several clash of heads that cut both fighters but didn’t do major damage and ultimately didn’t have an effect on the outcome.

“I felt I beat him,” said Fierro, who went to the body early on and used his left jab effectively throughout the fight. “The ref was clearly on his side – constantly interrupting the fight. I would have knocked him out, otherwise.”

The event was promoted by Sampson Boxing and TGB Promotions.