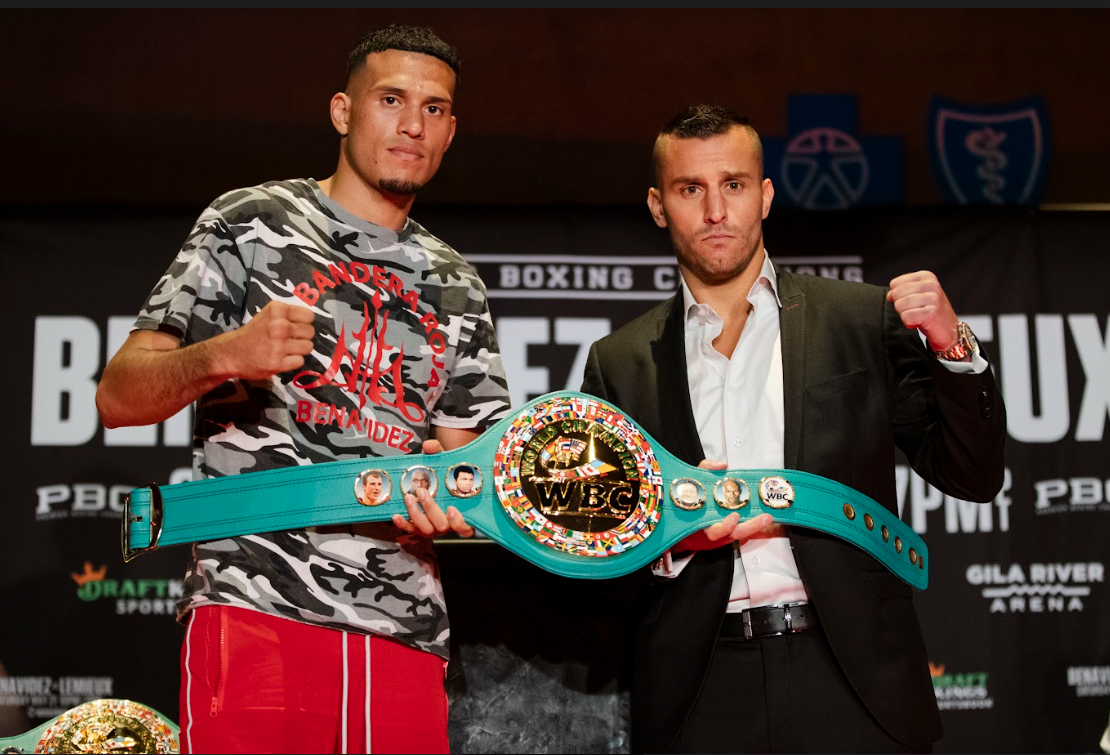 Here is what the fighters had to say Thursday from the AZ Blue Club at Gila River Arena:

“I’ve had a tremendous training camp and everything has been perfect. The miles have been run, the rounds have been sparred and the weight has been lost already. I came in extremely prepared for this fight. We both have a lot of knockouts, so I’m just looking forward to giving the fans a war.

“I really want to go in there and earn this title. I have a lot of respect for Lemieux and I’ve been watching him since I was young, but he has a lot to worry about with me. I’m faster and stronger, but he’s got the experience, so this is going to be a great fight.

“I’m 100% focused on Lemieux. I’m focused on the task in front of me. I just take it one fight at a time. I like to put everything into the fight and figure out the rest later. I know Lemieux is very motivated for this fight, so my mind is 100% on him.

“I can guarantee a hell of a fight, a war, and that somebody is getting knocked out. Neither of us wants to go to a decision. The people are paying good money to see a knockout, and that’s what they’re going to get. I’m leaving with the title on Saturday night.

“I didn’t see my son for four months so I’m happy to be here and be around him again. I locked myself away for training camp and now I’m just excited to be here.

“Lemieux has a great resume with a lot of knockouts and I feel like he’s probably one of the most dangerous fighters I’ve faced. The only guys who are more dangerous than him, haven’t stepped up and taken the challenge.

“I’ve given Lemieux the respect he deserves. I’m already on weight and I’ve done everything right in training. Now I’m just ready to go in there and get a big victory.

“I want the big names. I feel like I’ve earned it. I’ve been champion twice and now I’m fighting for another belt. I’ve been wanting to fight the other big fighters, but they haven’t accepted the challenge.

“I don’t want to act like I’m just going to go in there and knock him out like it’s nothing. Sometimes fighters who you don’t think aren’t going to give you problems end up giving you problems. We have to see what happens, but I do feel like I’m going to get him out of there eventually.”

“When you want to become the world champion, you have to beat the best guy out there. Right now, Benavídez stands in front of me. That’s who I have to beat to be the world champion. Everybody knows that Benavídez is a very good fighter, but I think people are going to see that I’m  a serious contender in the super middleweight division when I get that belt around me.

“It’s a big challenge, but I’m confident. I had a tremendous training camp for this fight. We’re ready physically and mentally. Benavídez is a good fighter. It’s going to be a hell of a show for the fight fans because he doesn’t like to do rounds and I don’t like to do rounds. We’ll see what happens.

“I don’t run away from anybody. I’ve never avoided any fight or any fighter. When I step in the ring, I’m the man to worry about. In this fight, there’s a solid guy in front of me, but I’m confident in my abilities and my strength and my power. We had a tremendous training camp to prepare specifically for Benavídez. I’m very confident in this approach. I have a lot of experience in the ring and I’m going to bring it on Saturday night.

“Yes, I do still have enough left in the tank. Absolutely. I’ve been an underdog in the past and I came up with the win. I know the difficulty that a fighter like David Benavídez poses and we came well-prepared to make sure we don’t get surprised in the ring.

“I’m very confident in my team and my abilities and what I have to do to walk out of here with that title. I have a lot of respect for David Benavídez. He’s a hell of a fighter. But the ring is the ring and I want to be a champion.

“Everything has changed in this camp. You change the mental just as much as the physical when you are fighting against a guy like David Benavídez. The guy is a bully and a brutal fighter. You change your work ethic in the gym. You punch harder. You’re more vicious. Everything is times ten.

“I bring power. Knockout power. I don’t care that he’s the so-called boogeyman of the division. He’s the fighter in front of me and I’m not scared of anybody. I’ll fight anybody. I’m scared of no man and on fight night, I’m determined to become champion.

“I’m getting this knockout on Saturday night. I’m Not overconfident, just very relaxed. I’ve fought only five times as a pro, but I’ve had big amateur fights in my past. I’m just going to have fun on Saturday night.

“I want Cuban people to know that I feel their love and support across borders. I’m very excited to have their support like that.

“The knockout depends on how my opponent comes out to fight. However, if Cota comes out like I expect him to, don’t be surprised if the fight is over in the first round.

“My fists are going to dictate how long the fight lasts. I wish him and his team nothing but the best, but it’s ‘Viva Cuba’ on Saturday night.

“If he feels that it’s disrespectful that I’m fighting him so early in my career, then he better show it in the ring.”

“He will absolutely get a boxing lesson and get a lot of rounds on Saturday night. That’s what we came here for. I came here to show him what true experience and the true caliber of my quality is worth. Viva Mexico!

“I felt that it was an insult for me to be scheduled against somebody that only had five fights under his belt. To be honest with you, it did feel disrespectful. But I’m okay now and I’m here and ready to show what I’m worth.

“I guarantee that you’re going to have a super spectacular show. Anytime that I’ve fought on a PBC card, it has been a war and something to be witnessed. Watch out, we may just steal the show on Saturday night.”

“This fight is just as important to me as the ones that have come before and the ones that will come after. I will say though, I’m definitely going to win this fight.

“I know that I have what it takes to showcase my talent on Saturday night. My goal is to show everyone watching that I’m here to stay.

“He can say that I don’t have the power to beat him. He can say whatever he wants. I’m going to do my talking in the ring on Saturday night and show everyone that I have enough power and more.

“This fight is going to open up doors for me. I believe that Luis holds the key for me. I’m well aware that he’s unbeaten, but I believe in my ability to be able to hold the key, open that door and go through it.

“We came here fully prepared and there is no thought at all about being nervous. I was born without fear. “I’m going to take advantage by attacking his body, and I know that he will be looking to land his hook. I’m going to listen to what my corner tells me to do in order to avoid it.”