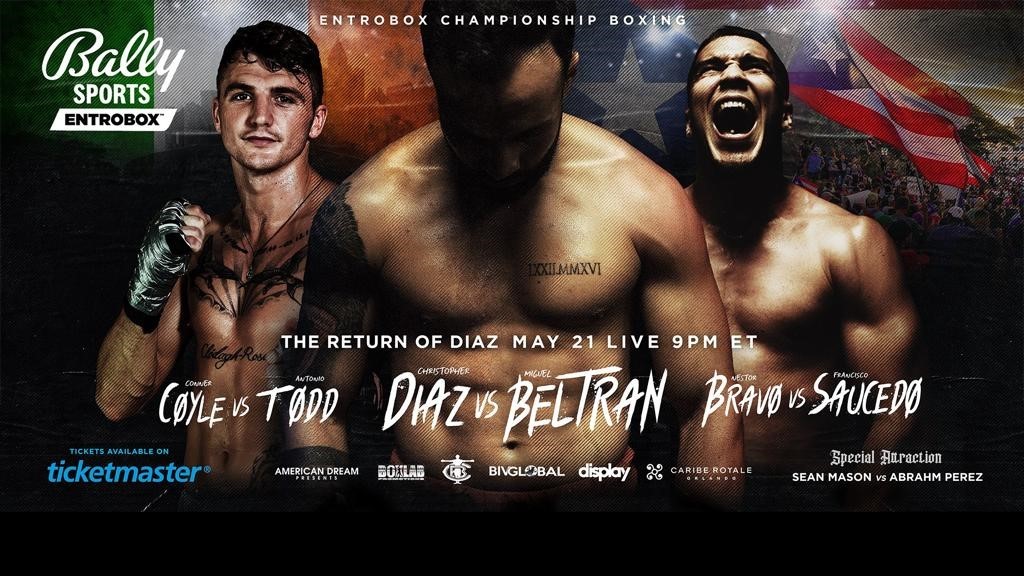 Orlando, FL (April 29, 2022) – Featherweight contenders Christopher “Pitufo” Diaz and Miguel Beltran will square off in the ten round main event of a Bally Sports Presents: Entrobox Championship Boxing card Saturday, May 21 at the Caribe Royale in Orlando, FL.

Born in Philadelphia, PA, raised in Barranquitas, Puerto Rico and now residing in Orlando, Diaz is regarded as one of boxing’s most exciting fighters. At 26-4 with 16 KO’s, Diaz has impressive victories over Angel Luna, Ray Ximenez, Neftali Campos, Raul Hirales, Bryant Cruz and Braulio Rodriguez. His third round stoppage of Cruz in 2017 earned him the WBO NABO 130 pound title.

Following his win against Rodriguez, Diaz challenged for world titles at 126 and 130 pounds but came up short. All four of his setbacks came against current or former world champions in Masayuki Ito, Shakur Stevenson, Emmanuel Navarrete, and Isaac Dogboe.

In the co-featured bout of the evening, unbeaten Nestor Bravo faces longtime contender Fernando David Saucedo in an eight round junior welterweight contest.

Hailing from Arecibo, Puerto Rico, Bravo, 20-0 (14 KO’s), is currently based in Orlando. Prior to his pro career, Bravo defeated future Olympic Gold Medalist Robson Conceicao and was an alternate for the 2012 Puerto Rican Olympic Boxing Team. Bravo turned pro in 2015 and stopped his first six opponents. In his most recent bout, the 28-year-old knocked out Vitor Jones in three rounds.

Undefeated Irish sensation Connor Coyle meets his toughest opponent to date when he challenges Antonio Todd in a ten round tilt for the vacant NABA middleweight title.

Coyle, who splits time between his native Northern Ireland and Florida, is 15-0 with 7 wins by knockout. On February 19, Coyle dominated once-beaten Rodrigo Rodriguez en route to a fifth round stoppage. The 31-year-old Coyle is promoted by Fire Fist Boxing Promotions.

The Diaz-Beltran, Bravo-Saucedo and Coyle-Todd bouts will air on the Bally Sports Network and Bally Sports app live at 9 PM ET.

“May 21 is going to be a great event for boxing fans,” said Ron Johnson, CEO of American Dream Presents “We’ve got three exciting fights that will air on Bally Sports plus a stacked undercard with blue chip prospects including a 2020 Olympian. I’m anticipating a great turnout to support two of Puerto Rico’s best boxers today in Diaz and Bravo. Sean Mason also brought out a big crowd to our last card ,so make sure to get your tickets before they sell out.”

The card is promoted by American Dream Presents, Boxlab Promotions and GH3 Promotions.

Tickets are on sale at https://www.ticketmaster.com/bally-sportsentrobox-championship-boxing-orlando-florida-05-21-2022/event/22005C889425AF5F.
Doors open at 5 pm and the first fight is scheduled for 6.

A four diamond resort, the Caribe Royale is a 1,388 room resort that provides a luxurious and relaxing experience for guests of all ages. Amenities include a spa, five restaurants, kid’s splashpad and playground, a two-story fitness center and a large outdoor pool featuring a 75 foot waterside. Fully re-imagined and renovated with over $127m in improvements and expansion Caribe Royale is the premier all suite hotel in Orlando.