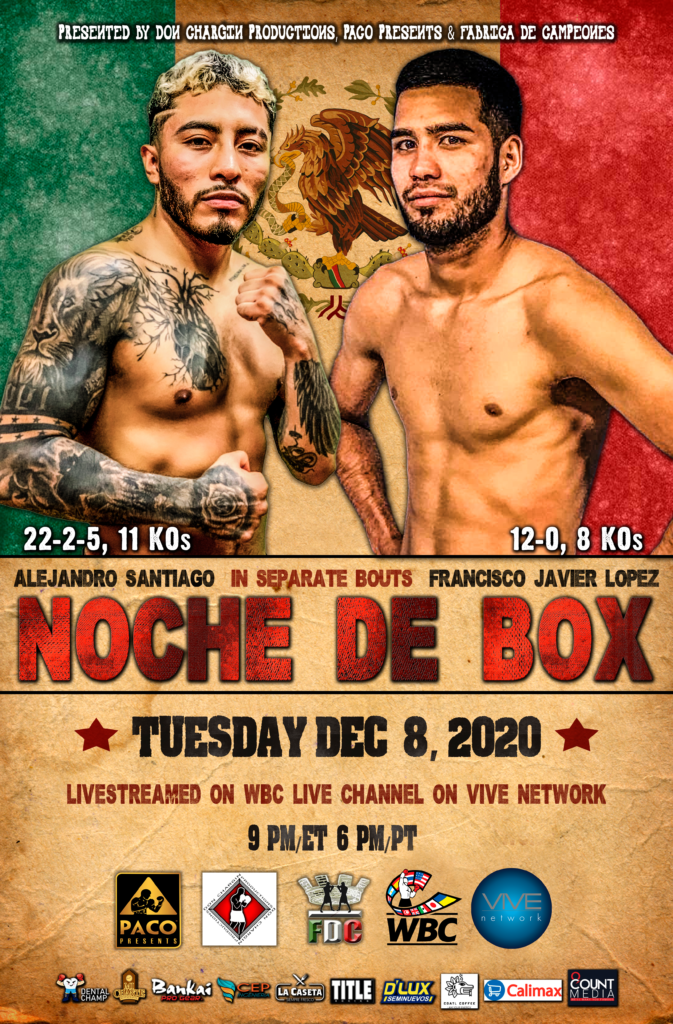 24-year-old Santiago has not lost a fight since 2014 (going 14-0-4, 7 KOs) and has forged a reputation for upsetting favored opponents in their own backyards. Santiago was last seen in September, successfully defending his WBC International Bantamweight Championship against tough-as-nails countryman Willibaldo Garcia via majority decision.

“I am just happy to be back in the ring and very grateful to be fighting one more time before the year ends,” said Santiago. “This time around, it feels a bit more normal than my first time during the pandemic. Training camp has been excellent, and I can hardly wait to get in the ring and take care of business. I heard that my opponent has been training extremely hard, however, that doesn’t concern me. I am happy he is ready so there will be no excuses. I am focused and will continue working on my craft to keep climbing up the rankings. I would like to challenge any champion at 115 or 118lbs. Line them up!!!”

25-year-old Gonzalez has never fought outside his home country but has fared well against the tough domestic competition in his weight division. Gonzalez’s only loss is to current WBO World Champion Elwin Soto. He was last seen in September stopping Mexican veteran
Jose Evaristo Aguirre in two rounds.

“Finally, Santiago has decided to fight me,” exclaimed Gonzalez. “We were close to fighting in the past but for some reason it didn’t happen. I am grateful for the opportunity and now that it is here, I am going to take full advantage of it.”

23-year-old Lopez is a former Mexican amateur standout with over 200 amateur fights and multiple state, regional and national championships to his credit. He was last seen in March, scoring a wide unanimous decision over Hector Ruben Ambriz.

“This fight without an audience is going to be a new experience,” said Lopez… “Nevertheless, I am mentally and physically ready for it. At the end of the day it is going to be my opponent and I inside that ring. Training camp has been excellent, I feel comfortable and ready for whatever Ivan Benitez brings to the table. Benitez is a tough competitor that has fought decent opposition in the USA, so I am aware that I need to be in my A game plan. I am ready to shine and make some noise.”

20-year-old Benitez, originally from Queretaro, Mexico, turned pro at age 15 and has fought solid opposition throughout his career.

“Chino” Lopez hasn’t faced someone of my caliber,” said Benitez. “He hasn’t fought anybody and his promoter has been protecting him. I have been working my butt off for this fight. Beating him is a great opportunity for me because a win over him will open other doors. Come December 8, Lopez will receive his first blemish on his undefeated record.”

“Romulo Quirarte and I are very excited to inaugurate the WBC Channel on VIVE TV,” said Paco Damian of Paco Presents. “It’s an opportunity for all promoters around the world to showcase their fighters. If you love competitive fights you must tune in December 8. You’re in for a treat. Alejandro Santiago is one step away from another world title fight. He is not afraid to fight any champion at 115 or 118 lbs. However, make no mistake he can not underestimate Erick Gonzalez, Gonzalez knows this is the opportunity of his life. We’ll also have a rising prospect, Francisco Lopez, whom I really enjoy watching fight. He is exciting and explosive, plus five more exciting bouts!”