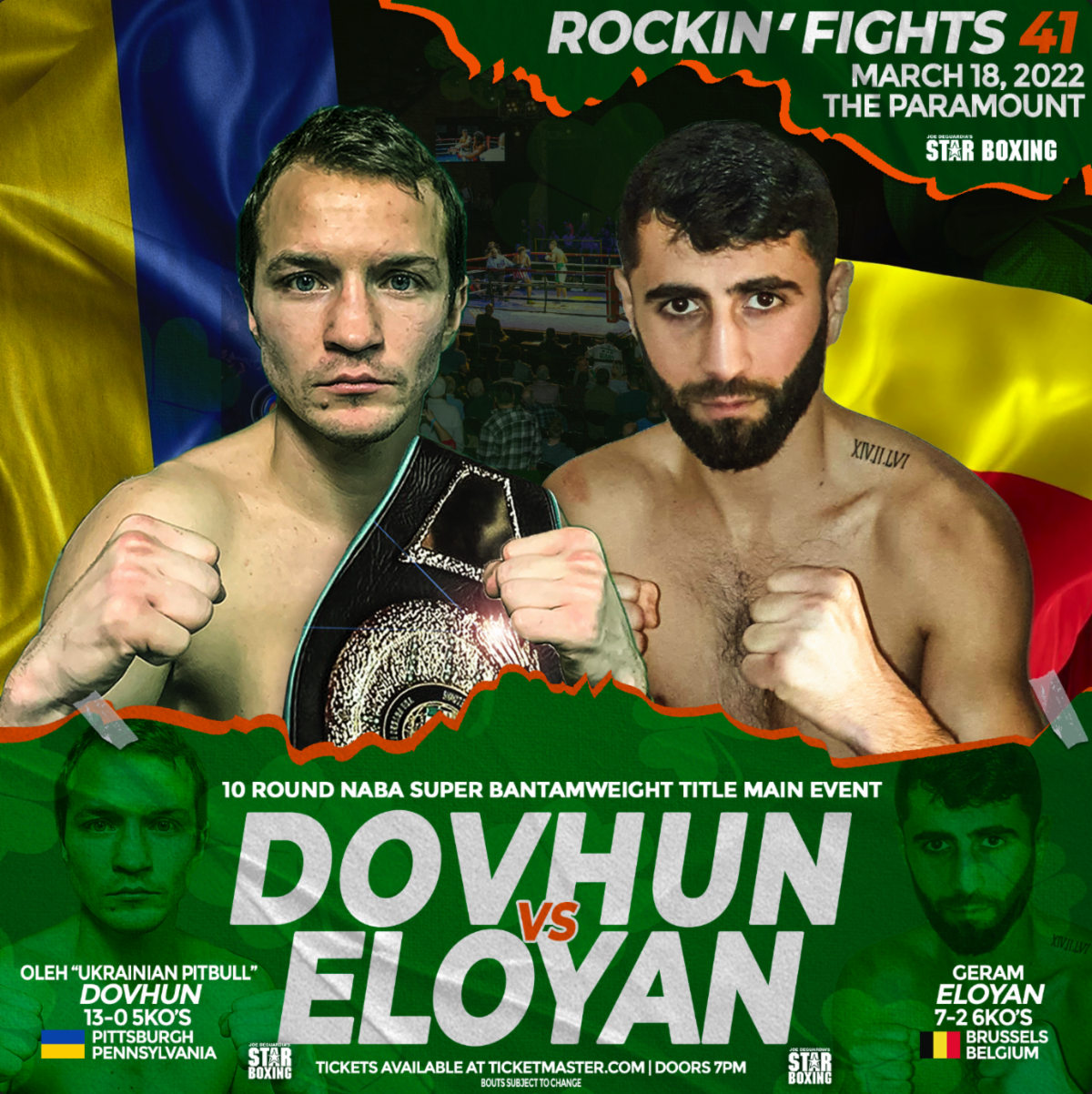 Long Island, New York (March 10, 2022) – Long before he was a NABA Champion, and #6 world-rated (WBA) super bantamweight OLEH DOVHUN (13-0 5KO’S) was just a kid growing up in the western Ukraine city of Stebynk. With a population of about only 20,000, Dovhun enjoyed a peaceful upbringing in his small-town religious home, alongside his mom, dad, and older brother.  This small-town boy soon became fascinated with the sport of boxing – a journey that has led him to Long Island, New York for this upcoming title defense on March 18 on Star Boxing’s renowned “Rockin’ Fights” series at The Paramount.

While in elementary school, Dovhun became friends with a fellow student who had begun to fight amateur bouts. “He would get a lot of attention from other students who were interested in him because he was boxing,” said Dovhun, “I wanted that attention too!” he said while laughing. At the age of 10, Dovhun made true to his promise and began boxing.

Nearly thirteen years later, Dovhun’s schoolyard attention ploy transformed into his livelihood, amassing approximately 250 amateur bouts while traveling throughout much of Europe and Asia to compete. From Ukraine to Khazakstan, the Philippines to China, Dovhun was able to see the world as an amateur boxer. While on its face it seemed glorious for the small town Ukraine kid to travel the globe doing what he loved, like most in boxing, his journey did not come without major sacrifice.

“I was in the middle of competing as an amateur in the World Series of Boxing in 2016 when my grandmother passed away a few days before my fight. Not only was I depressed leading into the fight, but I had broken my thumb during the fight – but I dug deep and still won!” said Dovhun reminiscing on one of his toughest moments as a boxer.

In 2017, alongside fellow Ukraine native and future Star Boxing stablemate Lyubomyr Pinchuk (14-2-1 8KO’s), Dovhun took a leap of faith and left Ukraine for greener pastures in the United States hoping to turn pro with world title aspirations. Finding his way to Pittsburgh, Dovhun teamed up with Mike McSorley of Conn-Grebb Boxing Club to try and make that dream a reality. Fast forward to today and Dovhun is well on his way. Dovhun holds an undefeated record of 13-0 (5KO’s), is the current NABA Super Bantamweight Champion, and is rated #6 in the World by the WBA.  Dovhun is focused on the ultimate prize: “I am going to beat Murodjon Akhmadaliev in 2022 and become the WBA Champion of the World!”

Nearing his ultimate goal of becoming a World Champion, what advice would Dovhun tell his younger 10-year-old Ukrainian self? “Work hard and believe in yourself at all times. Always focus and follow your dreams.”

Originally Dovhun was set to defend his NABA title against fellow undefeated super bantamweight Michel Da Silva (13-0 12KO’s), but the fight was moved due to visa issues. Stepping up for the challenge will now be Belgian bruiser GERAM ELOYAN (7-2-1 6KO’S) as Dovhun seeks to remain undefeated in his NABA title defense next Friday (3/18) at “Rockin’ Fights” 41.