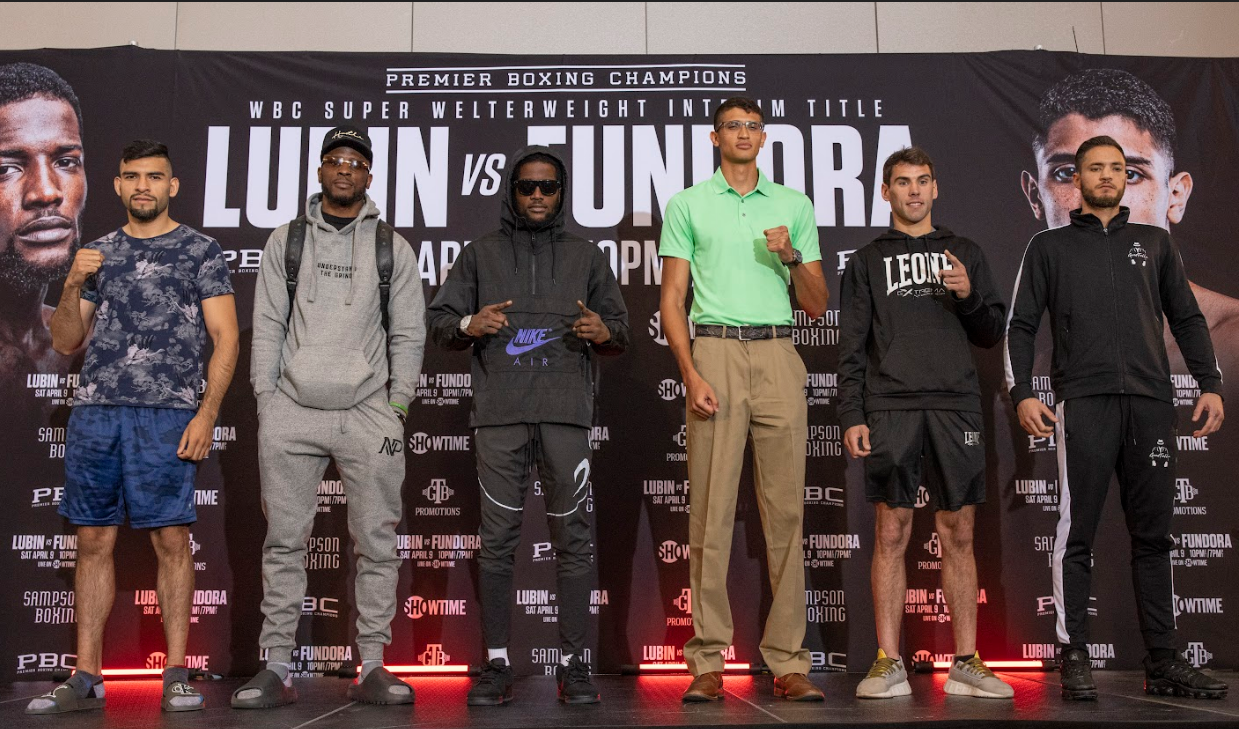 LAS VEGAS – April 7, 2022 – Top super welterweight contenders Erickson “Hammer” Lubin and Sebastian “The Towering Inferno” Fundora squared off at the final press conference Thursday before they meet for the Interim WBC Super Welterweight Title this Saturday, April 9 live on SHOWTIME in a Premier Boxing Champions event from The Theater at Virgin Hotels Las Vegas, part of Curio Collection by Hilton.

The press conference also featured former world champion Tony “Superbad” Harrison and highly regarded contender Sergio Garcia, who meet in the 10-round co-main event, plus unbeaten Kevin Salgado and Bryant “Goodfella” Perrella, who battle in the 10-round telecast opener.

Tickets for the live event, which is promoted by TGB Promotions and Sampson Boxing, are on sale now and can be purchased at AXS.com.

Here is what the fighters had to say Thursday from Virgin Hotels Las Vegas:

“I always knew I would get back to title contention. I dared to be great early. I tried to dethrone Jermell Charlo when I had just turned 22. I always knew I would be back in this position. It’s been only five years since that fight and I just get better every time I step into that ring.

“We don’t underestimate anybody. He’s a tall statue of a guy, but skills pay the bills. We go into camp and we draw up a game plan and then we execute on fight night. He’s a good fighter who comes in shape, but my skills will be the difference.

“We came out to Las Vegas so we can be isolated and away from all distractions. I go straight from the gym to my room to watch film. My trainer Kevin Cunningham is a mastermind in this game. He’s dealt with some of the greatest fighters of our era. I plan to be no different. I’m coming here to do great things.

“We went up weight classes in sparring but only a couple weight classes. Kevin has had the plan for this fight a long time ago. We came into camp strong and now we’re ready.

“I took the Charlo fight only three years into my career. I haven’t lost since, and my experience level is just getting better. My ring IQ is getting higher and I’m just fully prepared.

“I learned not just from my own loss, but from other people’s losses as well. My focus after the Charlo fight was just about getting back to the top.

“I fought in my 15th fight someone who was a couple inches shorter than Fundora. I’ve been in the ring with all types of people. I spar guys who are near Fundora’s height, including Jamontay Clark, who came into camp with me. The height doesn’t mean much to me.

“I have dynamite in both hands. I believe that I’m capable of blasting out everyone I’m in the ring with. I’m here to win.

“Saturday night is about continuing our legacy. I’m here to make a statement and dominate.”

“This is extremely important for me…  Being in this position just shows that hard work pays off. We all grew up in the sport at the same time. Lubin and I both grew up in Florida and it’s nice to be recognized for our hard work.

“I’m going to do my thing on Saturday night. We’re here to win. No matter how the fight goes, that’s the goal. This is a dream come true and it’s about time I get to be in the main event on SHOWTIME.

“I trust my power. If it goes to the decision that’s great, but if the knockout presents itself, I’m going to be ready to take advantage of it.

“The past five fights I’ve had were all hard fights. I gave Sergio Garcia his first loss and I’m planning on  giving Erickson Lubin his second defeat.

“I’m finally here fighting for an interim title and hopefully the next fight is for the world title. I hope all the fans who have been following my career tune in on Saturday for a great fight.

“Wherever I go in Mexico, the fans recognize me. It feels like home. My sister is going to be fighting there this month so I’m planning to be celebrating with my people then.

“We’re both human beings and there’s no need to be disrespectful outside of the ring. Once we step in there and the lights turn on, all that respect goes away.

“I can guarantee this fight is going to be an inferno. We’re number one and number two. Winner fights the champion for sure, so we’re going to give our all.”

“This is a great card all the way through with all of us at the same weight. We can all gauge each other. I’m definitely going to be watching Fundora and Lubin. We’re all competitive and the best man is going to win throughout the night.

“For me, Perrella was a fight that I probably took a little soon after losing my father and trainer Ali Salaam. I think I rushed into it a little too fast and he took the opportunity coming in weight and came in strong. Everything was working in his favor. I thought I pulled it out but it was a close fight.

“My brother L.J. and I grew up together, but because of the business side, we clash heads a lot. Sometimes it takes us out of our business of being brothers. In this sport you have to be strong-minded and strong-willed. We always make up. I wouldn’t want to have anybody else in my corner. My brother is a guy who knows how to talk to me and say what needs to be said to push me harder.

“I brought in Fareed Samad for this camp, who was able to add in some of the stuff my brother was missing. He really knows the sweet science and it really gives me great balance with my whole team.

“I just have to find a way to win. That’s the name of the game. It doesn’t matter how we do it. I don’t know anything about Sergio, and that makes him one of the toughest opponents I could have chosen.

“It’s hard to fight guys like Sergio because they’re such good people. I know he’s trying to butter me up, but I respect that he’s humble and ready to fight.”

“I took only positives from my fight with Fundora. We gave the fans a great fight and I learned a lot of valuable lessons that I’m going to apply to this fight against a former world champion. I’m going to be even better on Saturday night.

“I’ve said from the beginning, I don’t run or shy away from any fights. My team gives me the best opportunities and I’m grateful for that. I’m taking this fight against Harrison just like he did when he won the title against Charlo. My family’s future depends on the results of this fight.

“I respect Tony so much and I know that he’s a great champion. Me and Tony are the only people that matter in this fight and the best man will win.

“I could tell you that I want to win, but I have to show it inside of the ring. My preparation and my training is always with the objective to win.

“It’s great to be here representing Spain in the major leagues of boxing. It’s amazing. I want to show everyone that I have staying power and I plan to prove it again on Saturday night.

“I’m going to lose all respect for Tony for 10 rounds on Saturday night, and then we can be cool again after the fight.”

“I’m so excited to be facing this new challenge. I feel more prepared than ever. The goal is to create my own legacy and become a star here in the United States.

“My older brother Juan Carlos Salgado is in my corner and he supports me physically and mentally. He gives me great advice and I want to surpass what he did. I want to win all the titles and become a star in the U.S. That journey starts now.

“You’re going to see fireworks in the ring. It’s going to be quite a show and I would not be surprised if there is a knockout.”

“I’m very thankful to be here and it’s a pleasure to be part of this event and to be on this platform. The Tony Harrison fight was amazing. It was a great experience for me. I learned so much and have evolved into a whole new fighter since that fight and because of that fight.

“I’m a very difficult person to be in the ring with and I’m looking to show that on Saturday night. I don’t shy away from challenges. Losses don’t get to me, they just make me hungrier to come back even stronger. I’m a force to be reckoned with and I’m going to keep showing it.

“Whether it’s a knockout or it goes the distance, it doesn’t matter. I’m looking to put on a spectacular performance from that first bell.

“It’s been a mind-blowing experience working with Roy Jones Jr. as my trainer. He’s a genius in his field and it makes me feel like a kid in a candy store. I learn something new every day. It’s an incredible experience because he’s always bringing me something new. The sky is the limit with Roy [Jones Jr.] in my corner.”