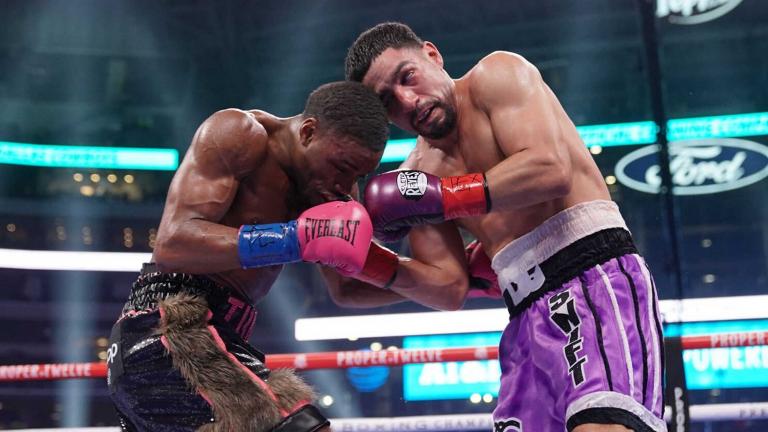 Spence (27-0, 21 KOs) retained his WBC and IBF titles with an impressive performance in his hometown that saw him own a 187 to 117 advantage in punches landed, according to CompuBox. Spence controlled much of the action with his jab, landing 84 of them to slowly damage the left eye of his opponent.

Garcia (36-3, 21 KOs), known as a supreme counter puncher, picked his spots against the unrelenting attack from Spence, having occasional success with his counter right hook and body shots. However, Spence was the more accurate fighter, connecting on 26% of his shots to 17% for Garcia.

The two welterweight elites continued to fight hard and throw big punches to the last bell, but it was Spence out landing Garcia in each of the last six rounds. After 12 rounds, the judges scored the fight 117-111 and 116-112 twice, all for Spence.

Fundora was in control from the outset, stunning Ahmed in the early moments of round one with a left uppercut from his intimidating six-foot six-inch frame. Ahmed was able to make it through a rocky first round, but encountered similar problems in round two.

Lopez got off to a fast start in round one, connecting flush with a right hand and following up with hooks to the body to drop Santana midway through the round. Santana rose to his feet and was able to slow the ensuing follow-up attack from Lopez by landing multiple hooks in the round’s remaining moments.

Santana remained planted in the center of the ring for most of the fight, while Lopez was happy to circle the ring and pick his moments to come forward and attack in spurts. Lopez built up a big advantage in body punches landed, landing 49 to Santana’s three.

In round nine, Lopez again dropped Santana, initially hurting him with a right hand late in the round to lead to the knockdown. Santana was able to make it through the round, but was quickly dropped two times early in the tenth round, with referee Neal Young halting the fight 1:22 into the frame.

Ramirez controlled much of the early action, tagging Flores with left and right hooks, slowly damaging the area under Flores’ right eye. Flores showed a formidable body attack but was unable to slow his opponent’s offense.

Ramirez owned a 62 to 37 advantage in punches landed throughout the fight. In the opening moments of the fifth-round, Ramirez delivered a picture-perfect counter right hook that immediately sent Flores to the canvas.

While Flores was able to get to his feet, referee Laurence Cole called an end to the bout 20 seconds into the round.

Prior to the pay-per-view, FOX Sports PBC Pay-Per-View Prelims on FS2 featured Issac Avelar (17-2, 10 KOs) earning a unanimous decision victory over Sakaria Lukas (23-1, 16 KOs) by the score of 98-92 according to all three ringside judges in their featherweight bout.