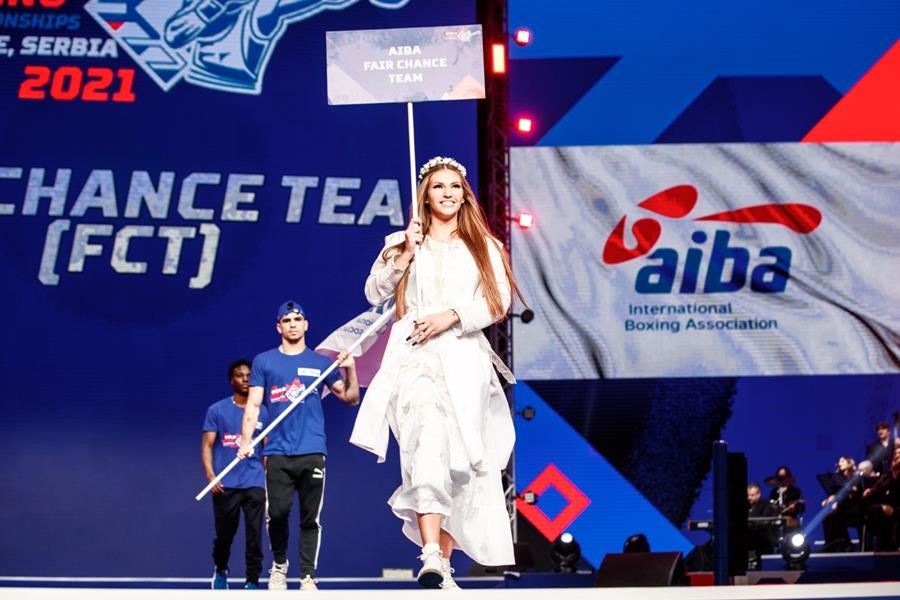 (October 30, 2021) – The first-ever ‘Fair Chance Team’ has got off to a winning start at the AIBA Men’s World Boxing Championships with Abdul Fawaz winning his first bout of the competition.

The ‘Fair Chance Team’ was created in response to the growing displacement and humanitarian crisis and launched within the AIBA social development program to give every boxer a fair chance and fair fight.

The project aims to support talented boxers who may not be in their native countries or may not be able to represent those countries due to various humanitarian reasons. For the first time in an AIBA competition, the team walked alongside the competing countries as part of the athletes’ parade.

Afghanistan-born boxer Tawfiqullah, one of the members of Fair Chance Team, said:

‘A few members of my family are boxers and because of their examples, I also started to train. My brother took me to a boxing gym seven years ago when I was 15 years old. My dream is to win the Boxing World Championships. My favorite time is when I stay in the ring and fight. To represent the Fair Chance Team here in Belgrade is a unique chance for me. Together with others from my team, we went through many difficulties to come here and I am very thankful to AIBA for such a great opportunity.’

Another representative of the team – Abdul Fawaz, also known as Floyd – won his first bout in the World Championships. The 19-year-old boxer was born in Nigeria but now lives and trains in Scotland at the Byron Amateur Boxing Club. He won his first silver medal in the Scottish National Championships in 2018.

The Young Nigerian-born boxer arrived at the AIBA World Boxing Championships with only 20 contests under his belt but has already delivered success for the Fair Chance Team during his debut contest in Belgrade. Despite his low number of bouts in Scotland, he boxed well against Trinidad & Tobago’s Anthony Joseph and gained important experience of competing at the highest level. Fawaz surprised Joseph with his terrific work rate and changed his tactics a few times when the bout progressed. He won the contest by split decision as first for the Fair Chance Team.

Please see video highlights of past days of competition to the link: