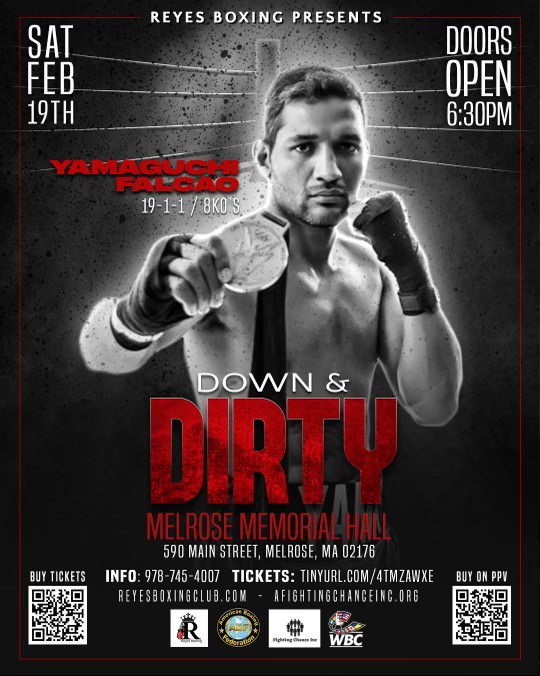 Presented by Reyes Boxing, tickets for “Down & Dirty” are on sale now by going to Tinyurl.com/4TMZAWXE. The card will also be broadcast on Throwdownsports.com. More information is available by calling 978-745-4007 or going to ReyesBoxingClub.com.

Doors open at 6:30 and Melrose Memorial Hall is located at 590 Main St.

Originally from Brazil but living and training in Florida, Falcao’s impressive professional record is 19-1-1 with 8 wins by knockout. The 2012 Olympic Bronze Medalist won all three of his fights in 2021 while capturing the WBC Latino, WBA Fedecaribe and ABF Continental Americas titles. Falcao’s looking to face the world’s best 168 pound fighters but must first get past Farias.

Hailing from the boxing-rich city of Buenos Aires, Argentina, Farias is 10-1-2 with 4 KO’s. He’s fighting for the second time in the US and is confident he’ll defeat Falcao on the 19th.

Falcao-Farias is scheduled for ten rounds for the WBC Latino Super Middleweight title.

Representing Derry, Northern Ireland, Coyle’s 14-0 with 6 wins by knockout. The charismatic 31-year-old is well-traveled as a pro, fighting in Ireland, Mexico and four different US states.

Coyle, who trains alongside Falcao in Florida under the tutelage of Florida Boxing Hall of Fame trainer Jim McLaughlin, captured the ABF belt in April with a first round knockout.

“We are pleased to have Yamaguchi and Connor back in the ring,” said their promoter Jody Caliguire of Fire Fist Boxing Promotions. “The Boston metropolitan area has a huge Irish and Brazilian population so the turnout should be great!”

Additional bouts and undercard opponents will be announced shortly.

For more on Falcao and Coyle, visit Firefistboxing.net.