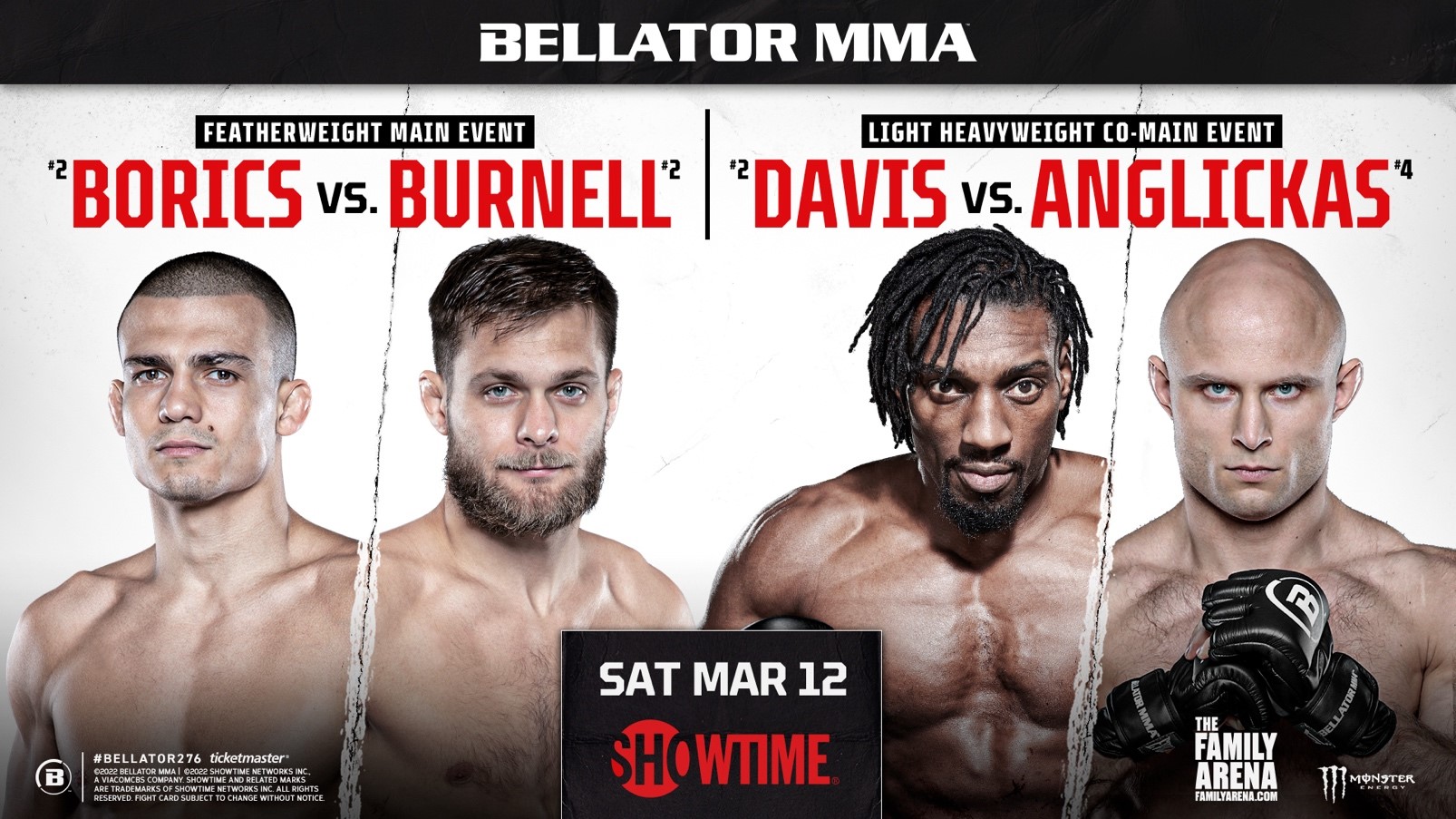 LOS ANGELES (February 9, 2022) – A future shot at the BELLATOR Featherweight World Championship will be on the line when No. 2-ranked Adam Borics (17-1) meets a man also ranked No. 2 in the Official BELLATOR Rankings, Mads Burnell (16-3) in the main event of BELLATOR 276 on Saturday, March 12 at The Family Arena in St. Louis.

In the co-main event former BELLATOR Light Heavyweight Champion and No. 2-ranked Phil Davis (23-6) will return to action and open his 2022 campaign against No. 4-ranked Julius Anglickas (10-2), who most recently challenged for the 205-pound title. The main card will also see a pair of skilled lightweights compete, when undefeated Jay-Jay Wilson (8-0) moves up in weight to meet Dagestan’s Gadzhi Rabadanov (16-4-2).

Tickets for BELLATOR MMA 276: Borics vs. Burnell will go on sale this Friday, Feb. 11 at both Ticketmaster.com and Bellator.com, with a special presale taking place the day prior.

A multi-faceted fighter with tremendous success in two different combat sports, Adam Borics knocked out all 25 of his amateur opponents en route to compiling 10-0 (kickboxing) and 15-0 (MMA) records. Holding a three-inch height advantage and tied with upcoming opponent Mads Burnell as the No. 2 featherweight in the BELLATOR rankings, the Ft. Lauderdale featherweight commenced his pro career with 14 straight triumphs, including ten by KO or submission.

Much like his upcoming foe, the nine-time BELLATOR veteran, armed with an 8-1 promotional record, prefers to dispose of his counterparts quickly as evidenced by ten of his 18 career wins culminating in knockout or submission. Additionally, the former Hungarian Fight Championship Featherweight kingpin has fought only 41 rounds since turning professional in Aug. 2014, an average of only 2.3 per outing.

Nicknamed “The Kid,” the former Thai and Hungarian Thai Boxing World Titleholder, who lives by the adage “Practice laborious, battle easy,” and holds knockout wins over former BELLATOR featherweight champion Pat Curran and ferocious featherweight Aaron Pico. Born in Budapest, Hungary, the Sanford MMA fighter, who signed a multi-fight extension with BELLATOR in January 2021, launched his promotional campaign by submitting Anthony Taylor via rear-naked choke in April 2017. After dropping his lone BELLATOR bout at the hands of former bantamweight champion Darrion Caldwell in the quarterfinals of the BELLATOR MMA Featherweight Grand Prix, Borics has outpointed his last three opponents under the company banner.

Currently riding a seven-bout winning streak, Mads Burnell prefers to dispatch of his opponents early. In 19 career fights, the submission specialist has stopped more than half of his adversaries (10), including eight in the opening round. Additionally, the Copenhagen, Denmark, native has not fought past three rounds in his professional career, while averaging a mere two per contest. The Arte Suave Copenhagen product, who will turn 28 less than one week prior to his fourth consecutive promotional appearance at BELLATOR MMA 276, opened his vocation by defeating his initial five opponents, including three via submission.

A first-degree black belt in Brazilian jiu-jitsu, Burnell captured the Cage Warriors featherweight title by submitting then-champion Dean Trueman by Japanese necktie at 3:04 of the second round on June 29, 2019. Two months after signing with the company, the ferocious featherweight took the mixed martial arts world by storm when he recorded his lone career knockout and floored Darko Banovic at 3:13 of the first stanza in his promotional debut at BELLATOR MMA 248 on Oct. 10, 2020, in Paris, France.

Following a second-round destruction of “The Ultimate Fighter: Team McGregor vs. Team Faber” standout Saul Rogers via rear-naked choke at BELLATOR MMA 257, the three-time BELLATOR MMA veteran returned to the cage less than four months later and upset Emmanuel Sanchez via three-round unanimous decision (29-28 and 30-27 twice) in a non-stop battle at BELLATOR MMA 263 on July 31, 2021, in Los Angeles. A former European No-Gi champion, Burnell hopes to keep his undefeated BELLATOR record intact when he challenges fellow No. 2-ranked Adam Borics.