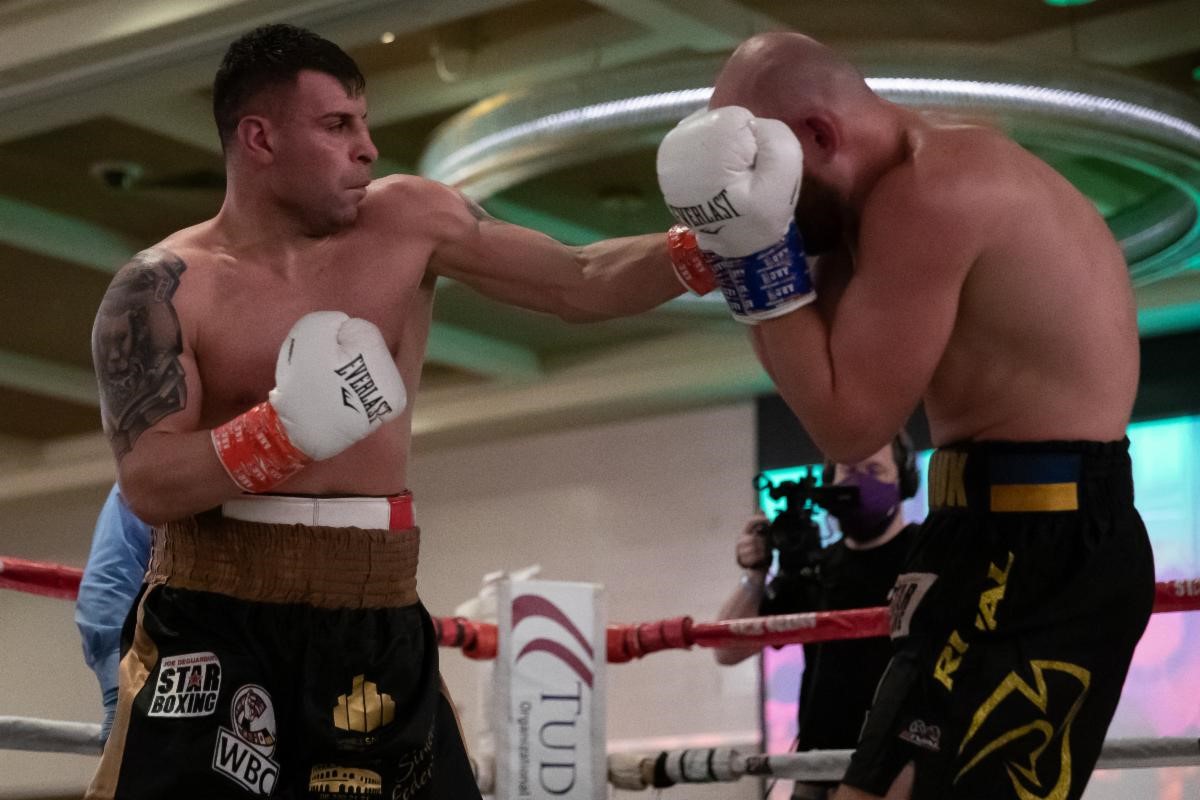 The opening round had the packed crowd on their feet as Federici and Pinchuk came out swinging, looking to establish their respective game plans. Federici began to find success working on the inside, putting efficient punches together with quality speed forcing Pinchuk to work off the back foot. Pinchuk would respond with combinations to the body, attempting to utilize the jab to keep the Italian tank, Federici, at a distance. As the battle of wills continued an accidental clash of heads with a minute left in the fourth round caused a gash over the eye of Federici. Knowing what was on the line both fighters maintained an impressive work rate over the 10-rounds, however it seemed to be Federici’s ability to bully his way inside that would make the difference. The judges saw it in favor of Federici by unanimous decision, who successfully defended his WBC CA title, and became the new NABA Gold Champion (99-91, 97-93 2x).

In 8 rounds of action, Ireland’s, “SUPERFLY” TONY BROWNE (now, 5-1) was successful in his US debut against the tough LEANDRO “APOLLO” SILVA (now, 3-6 2KO’s). Silva came out of the gate looking to control the action, while Browne effectively countered his aggression. In the 5th round, Silva buzzed Browne with an overhand right, but Browne was able to shake it off and power on. Silva kept coming forward trying to find a way in, but Browne continued to successfully work from the outside. Browne would take home the unanimous decision in his US debut (77-75, 78-76, 79-75)

Also making his US debut, 22 year old Irish product, “THE SILENT ASSASIN” RYAN O’ROURKE (now, 8-1 1KO) defeated Frenchman, FAYCAL REZKALLAH (now, 6-2-1 1KO) over 6 rounds. The Schenectady crowd was “oohing” and “ahing” as O’Rourke was landing from impressive angles. While O’Rourke controlled the pace of the fight, Rezkallah had his moments, waiting for O’Rourke to take a beat, before returning the favor in the form of multi punch combinations. O’Rourke’s early work to the body paid dividends in rounds five and six, hurting Rezkallah. The fight would find the final bell, and Ryan O’Rourke would earn the clean sweep on the cards for the unanimous decision victory (60-54 3x).

In the opening bout of the evening MICHELLE COOK (now, 2-3-2) and LIZ TUANI (now, 1-7) impressed in a competitive battle. Tuani came out swinging with force, but Cook was able to weather the storm. Late in the 3rd round, Cook found a home for her right hand knocking Tuani on her heels. At the close of the fight, Cook would get the nod by unanimous decision (39-37 X3)

“The fans came out early and stayed late for a thrilling night of fights at Rivers Casino,” said Star Boxing CEO JOE DEGUARDIA. “Federici and Pinchuk put on one hell of a show, and left it all in the ring – both should be proud. Congratulations to Simone on the victory, and Tony Browne and Ryan O’Rourke for shining in their US debuts.”