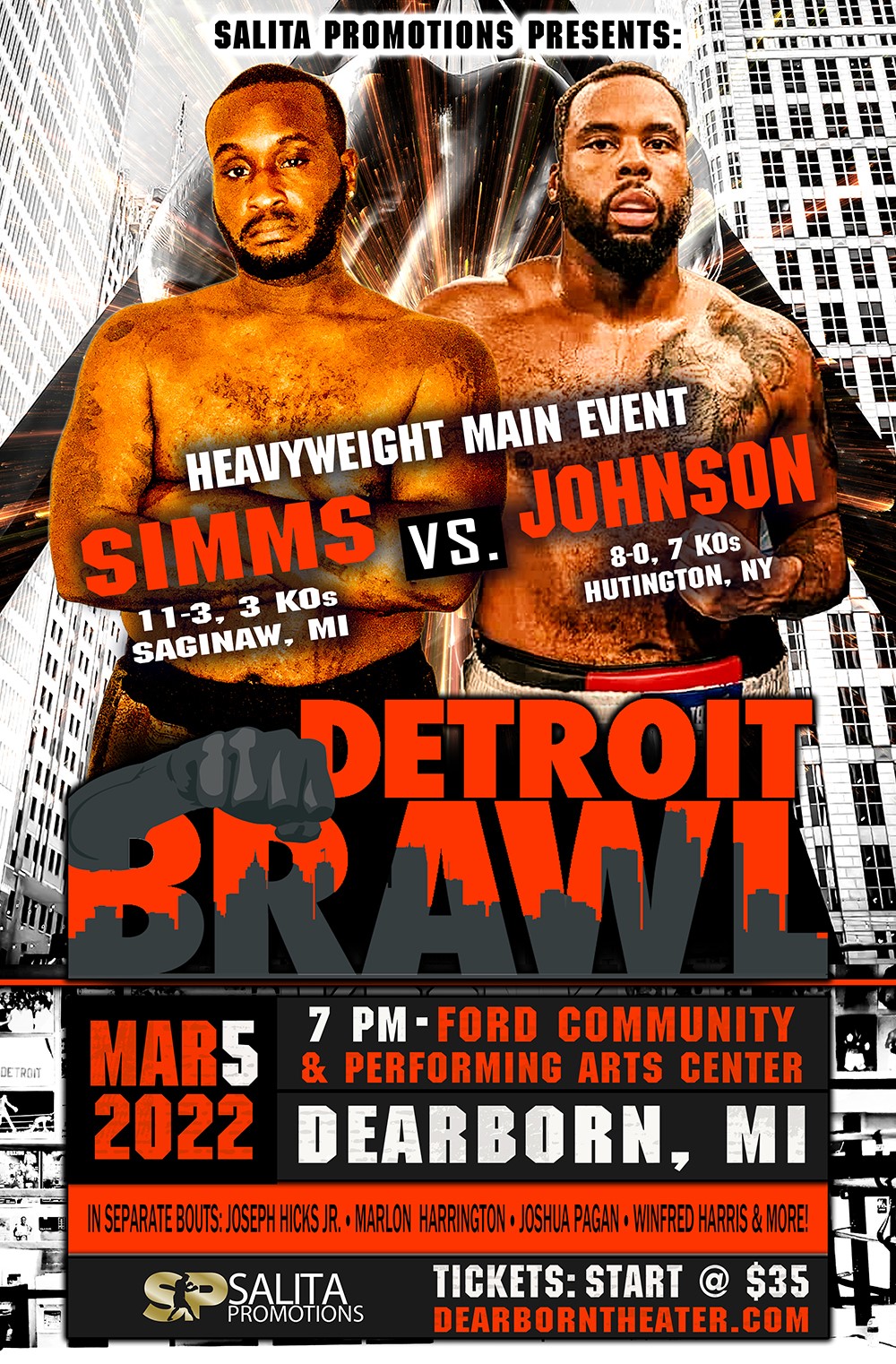 (February 24, 2022) – Heavyweights Robert Simms and Moses “ThunderHands” Johnson, both say it will be nothing personal when they go to war in the 10-round main event of Salita Promotions’ latest Detroit Brawl, on Saturday, March 5, 2022, in the Lincoln Ballroom of the Ford Community & Performing Arts Center in Dearborn, Michigan.

“Things went pretty good,” said Simms of his preparations for the big fight. “We’ve been working out three times a day, sparring and stuff like that. Some strength training and working out later at night to get used to it. I’ll be ready.”

Simms, who beat 8-1-1 Aaron Quintana in his last outing in March of last year, has also beaten 8-0-2 Colby Madison, 15-1 Joe Cusumano, and forced top heavyweight prospect George Arias to settle for a close majority decision victory in the past three years.

“I have too much experience for him,” added Simms about why he will win the old-school showdown against Johnson. “I’ve already beaten some undefeated fighters and guys with every style you will ever see. I don’t think he will have anything new for me. He’s got a lot of knockouts, but he hasn’t had a lot of tough opposition. I’m not saying he’s not a good fighter, but he hasn’t been through a war yet to show what he really has. The way I can move and box and hit without getting his throws a lot of heavyweights off. You can’t really prepare for what I do. It’s hard to find a 5’ 11” guy who can move like I do and almost impossible to get a sparring partner to do the same thing. The movement and having to punch down is what gives me the advantage against bigger guys. We are both doing a job. It’s not personal, but that night, I’m going to school him.”

Also not feeling a grudge match scenario, Johnson says he’s looking forward to answering questions about himself against the tricky veteran Simms.

“It’s nothing personal, but somebody has to win and it’s going to be me,’ he said. “I’m going there to put the work in and continue my winning streak, but I wish him the best after that.

Johnson, who spends time working with young amateur boxers in his spare time, says he wants it too badly to lose on March 5. “I have too much heart and determination for him. Boxing is my life. It’s not something I do part time. I eat, sleep and breathe boxing.”

“Johnson vs Simms is a bonafide top-level crossroads fight between an upcoming undefeated contender and a proven world-class upset artist in Robert Simms,” said an excited Dmitriy Salita of Salita Promotions. “This is a great fight, which tops off a sensational card featuring some of the best prospects and contenders in boxing from Michigan, US and abroad. Detroit is on its way to being one of the hubs for world-class professional boxing.”

Rounding out the action will be undefeated Gordie Russ II, who will hope to keep his record perfect (currently 3-0, 3 KOs) against Minnesota’s Salome Flores Torres (1-5).

PLEASE NOTE: Tickets ordered online will be mailed up to one week prior to event date. Tickets ordered within a week of event will be placed in will call at the box office for pick-up. A limited quantity of VIP tickets is also available by calling Rhyan Neco: 313.765.7698.

The Ford Community & Performing Arts Center is located at 15801 Michigan Ave. in Dearborn. On fight night, doors open at 6:30 pm and the action starts at 7:00 pm.