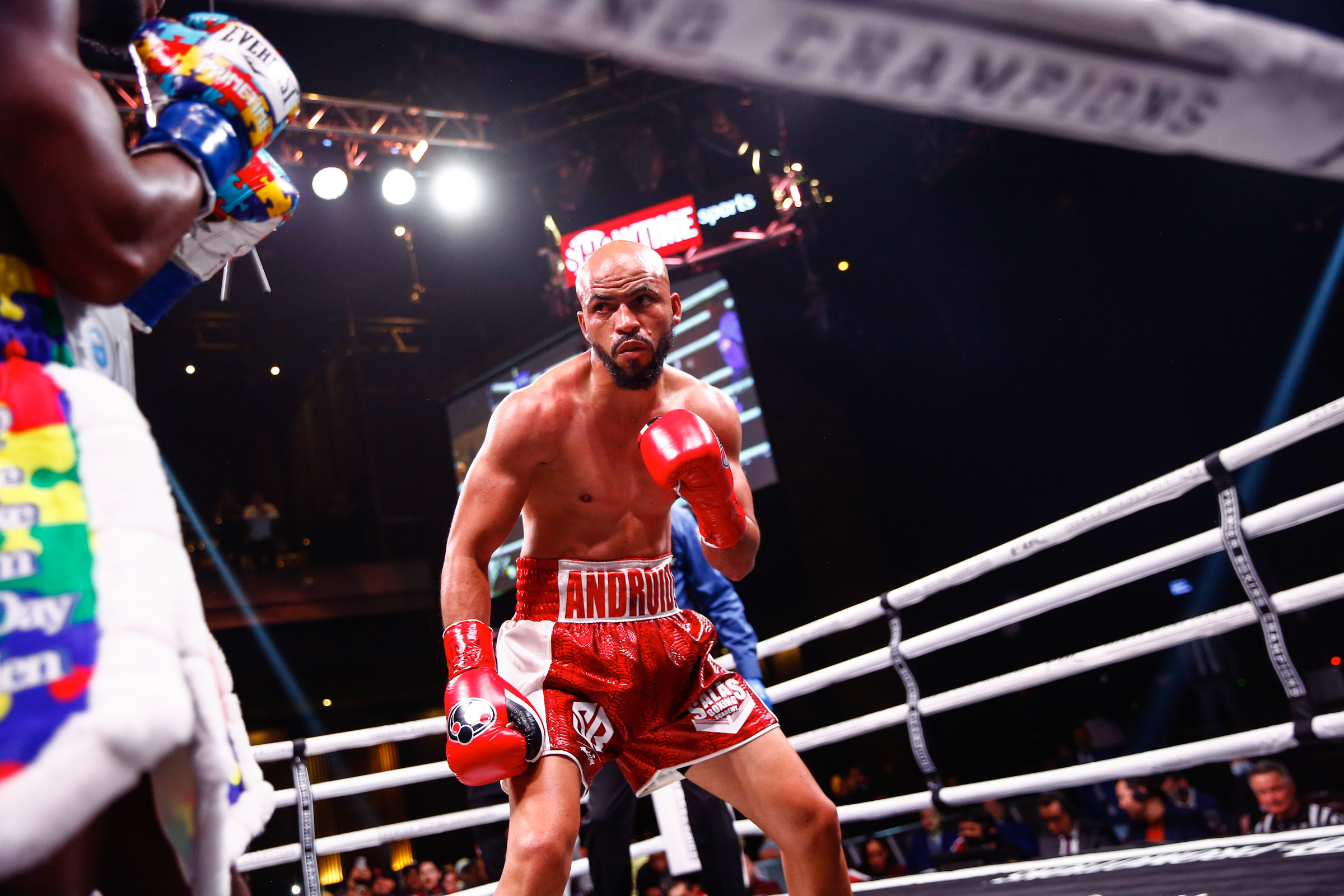 LAS VEGAS – February 26, 2022 – Late replacement Hector Garcia performed like the world champion he was substituting for on Saturday night, battering and dropping the highly touted Chris Colbert to earn a unanimous decision in a 12-round WBA Super Featherweight World Title Eliminator that headlined a thrilling  tripleheader live on SHOWTIME in a Premier Boxing Champions event from The Chelsea inside The Cosmopolitan of Las Vegas.

Garcia (15-0, 10 KOs) stepped in for the WBA Super Featherweight World Champion Roger Gutierrez less than three weeks ago after Gutierrez was forced to withdraw due to a positive COVID-19 test. Despite having little time to prepare, the southpaw Garcia used his height and powerful left hand to dominate Colbert (16-1, 6 KOs) by scores of 118-109, 118-109 and 119-108.

“I have to thank everyone in my corner, Ismael Salas and Bob Santos, and everyone that worked with me,” said Garcia. “I feel great. I definitely knew three weeks ago that my life would change. My trainers gave me the confidence to win this fight.”

“I’m sorry I let everyone down, today he was the better man,” Colbert said afterward, his arm draped around Garcia in an encouraging embrace. “I take my losses like I take my wins. I want to run it back and hopefully we can do it again. There’s no excuses. He was the better man today.”

Garcia was the aggressor throughout, dropping Colbert for the first time in his career with a counter left in the seventh round that caused Colbert to fall backwards, his legs flying up in the air from the momentum. Colbert got to his feet, but Garcia jumped on him again, stalking him around the ring.

“In the ninth and 10th rounds I hit him so hard,” said Garcia. “I knew I had him. I knew he wasn’t going to be able to box anymore.”

Colbert could never get on track and showed little of the aggression and skills that made him one of the most talked about young fighters in the sport.

“Everyone puts pressure on me in the ring,” said Colbert. “That’s nothing new. I want to get a rematch if I can. Congratulations to Hector and his team. They deserved this win tonight. I wasn’t feeling myself. At the end the day, I’m still ‘Primetime’ on SHOWTIME.”

In the end it was Garcia, a 2016 Dominican Olympian, who performed like the favored fighter, punishing Colbert and pushing him back and potentially earning a title shot against Gutierrez.

“I want to fight Gutierrez for the world championship,” Garcia said. “I worked too hard to get into this position today.”

A former valedictorian of his high school, Gary Antuanne Russell (15-0, 15 KOs)passed the biggest test of his career with flying colors, stopping the former world champion Viktor Postol (31-4, 12 KOs) abruptly in the tenth and final round of their super lightweight bout in the SHOWTIME co-main event.

After pushing the action for most of the fight, Russell hurt Postol with a left uppercut in the tenth and followed up with a series of lefts and rights. With Postol against the ropes absorbing combinations, referee Mike Ortega intervened and waived it off at 2:31 of the tenth, much to Postol’s surprise, who shrugged his shoulders and seemed miffed at the stoppage. Russell kept his knockout streak alive while Postol dropped his second straight contest.

Russell was a 2016 U.S. Olympian who owned a 3-1 amateur record over current unbeaten welterweight Jaron Ennis, and he fought like one of the top contenders at 140 pounds on Saturday.

“The performance speaks for itself,” said Russell. “You see (Postol) went the distance with Terence Crawford, and I just stopped him. I believe I’m ready for another step-up fight.”

The two embraced in the ring when it was over, the respect between the fighters on full display. Postol fought on Saturday with his wife and their twin five-year old sons back home in Brovary, Ukraine in harm’s way with the Russian military invading the country.

And Russell did that repeatedly on Saturday. Gary Russell Jr., the former titleholder who lost his belt last month, manned the corner on Saturday with their father Gary Sr. relegated to ringside for health reasons, and he told his younger brother to “break the will” of Postol throughout the bout. Russell obliged, fighting aggressively and continuously pinning Postol against the ropes.

Postol had some success with his right hand and his jab, especially in the ninth when he landed a thudding right , but Russell showed a granite chin and countered effectively and in the tenth he landed crisp combinations, showcasing his hand speed, leading to the stoppage, the first time Postol had ever been stopped. Russell led on the scorecards at the time of the stoppage by scores of 89-82, 89-82 and 88-83.

With his promoter, the former two-division champion Marcos Maidana urging him on from ringside, Argentina’s Fernando Martinez punished Jerwin Ancajas over 12 rounds to wrest away his IBF junior bantamweight title via a unanimous decision  in a star-making performance in the SHOWTIME telecast opener.

After exchanging hugs, handshakes and pleasantries during the final press conference on Thursday, Martinez (14-0, 8 KOs) and Ancajas (33-2-2, 22 KOs) dispensed with the niceness and engaged in an action-packed thriller.

Martinez, whose father died while he was in the amateurs  and helped introduce him to boxing, fought back tears as he expressed what the win meant to him.

“This moment is so special to me,” said Martinez. “It hurts so much that my father’s not here for this great moment in my life, but I know that he oversaw this. I’m so happy for my corner and for the people who supported me over the years. I want to thank SHOWTIME for their support. I want to thank Jerwin for giving me this opportunity. I am so thankful for this.”

Martinez landed 421 power shots , a new division record and 427 total punches, forcing Ancajas to be taken to the hospital as a precaution following the match.

“I am so thankful for team Martinez to give me this opportunity to make this fight,” Ancajas said. “Yes, I want the rematch and I’ll do everything to achieve my goal. I learned a lot in this fight and he’s a great challenger.”

The two continuously walked through hellacious punches throughout the action. But it was Martinez who hurt Ancajas more than the champion and in between the ninth and tenth rounds, Ancajas’ corner was asking him if he was okay to continue. Ancajas responded by buckling Martinez in the 10th round with a right hand, and he buzzed Martinez again with a straight left only for Martinez to fire back with roundhouse punches of his own in a snapshot of the non-stop action that took place.

The event was promoted by TGB Promotions. The SHOWTIME CHAMPIONSHIP BOXING tripleheader will re-air on Tuesday at 10 p.m. ET/PT on SHOWTIME EXTREME.