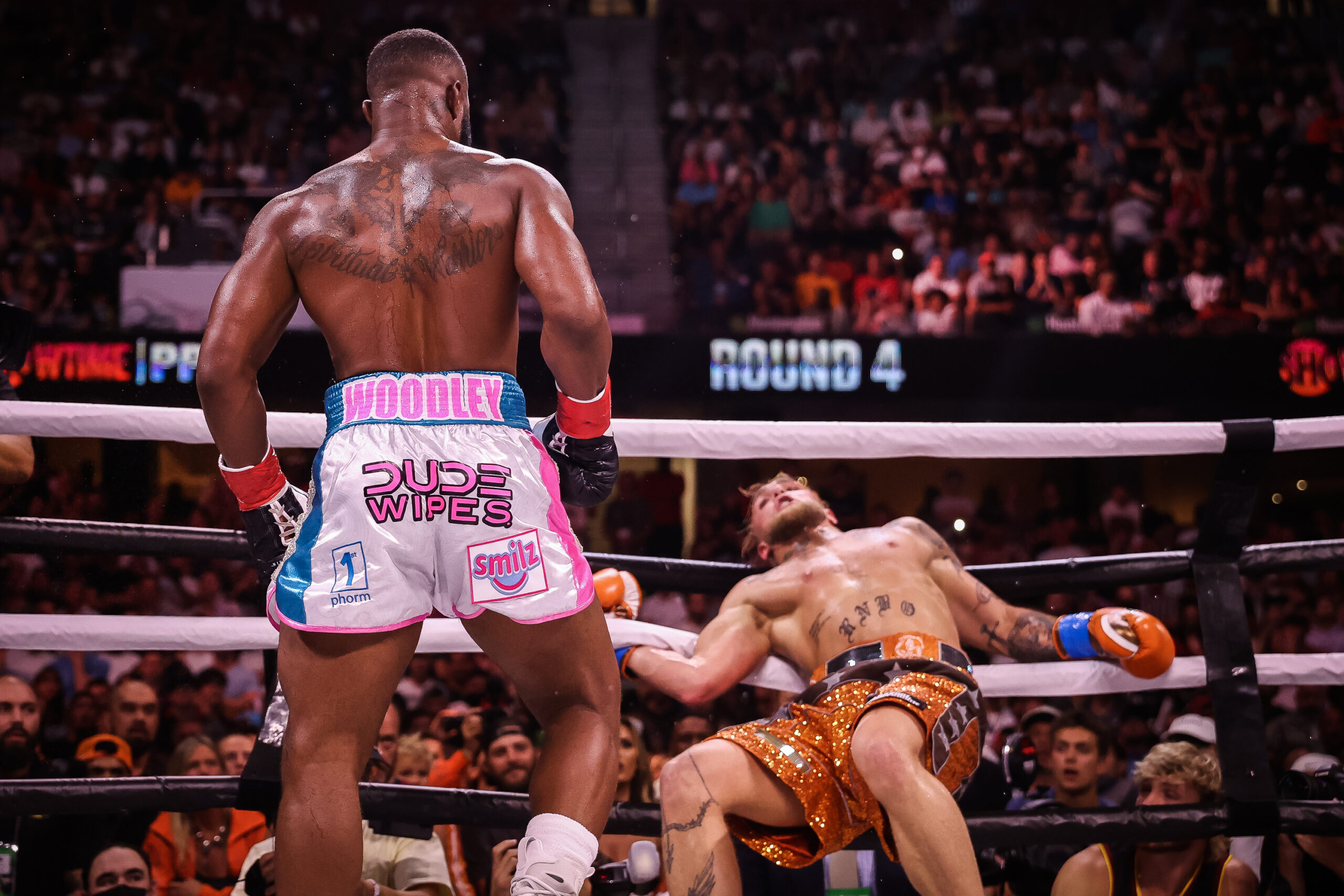 CLEVELAND, Ohio (August 29, 2021) – Boxing’s newest superstar Jake “The Problem Child” Paul continued his rapid ascent within the sport Sunday night, scoring a split-decision win over former UFC Champion Tyron “The Chosen One” Woodley in front of a sold-out crowd of 16,000 fans at the Rocket Mortgage FieldHouse in Cleveland, Ohio live on an action-packed SHOWTIME PPV telecast.

“I don’t know what to say – he was a tough opponent and he’s been fighting for so many years and I’m still new to this,” said Paul, a renowned content creator who dove into the world of prizefighting just three years ago. “My legs felt weird, I wasn’t sure what was wrong with me. All respect to Tyron though. He’s a Hall of Famer and put up a good fight. I have nothing but respect for him. There’s no hard feelings. This feels amazing to do this for my city and it’s a dream come true.”

After weeks of buildup, including an eventful fight week, Paul and Woodley swapped the verbal jabs for real punches and Woodley was a clear step-up from Paul’s previous three opponents, posing a true threat for the first time in Paul’s career. The 39-year-old who was making his pro boxing debut landed perhaps the most meaningful punch of the night, rocking Paul with an overhand right that sent Paul against the ropes. But it was Paul who was more active. He out-landed Woodley 71-52 in total punches, while Woodley out-landed Paul in power punches 41-35.

“He hit me with one shot the whole fight, and it was a good shot,” said the polarizing Paul. “It was one really good shot. I don’t know what that one judge saw. But l still got the victory. For me to come here and go eight rounds in my fourth fight, who does that? I’m doing things that have never been done.”

The former UFC Welterweight Champion Woodley, who made five successful defenses of his belt, believed he did enough to get the win in his professional boxing debut.

“I feel like I won the fight,” said St. Louis’ Woodley. “Jake is a great opponent. I didn’t expect him to eat my punches like that. But the fact that one judge only gave me two rounds is insane. Forget that Tommy Fury fight. Let’s run that back. Nobody is going to sell the PPV as we did. The ropes held him up when I hit him. I could have had that knockdown. I walked him down and landed back time and time again. I landed power punches, he missed shots all night.”

In the co-featured bout, the most decorated fighter in women’s boxing history made a strong case for number one on the women’s pound-for-pound list as Amanda Serrano (41-1-1, 30 KOs) scored a dominating unanimous decision over tough Mexican warrior Yamileth Mercado (18-3, 5 KOs). The WBC/WBO Featherweight World Champion Serrano defended her titles against the super bantamweight world champion Mercado with scores of 97-93, 98-92, and 99-91 in the ten-round bout.

“I had a tough Mexican in front of me tonight,” said Serrano, a Brooklyn, N.Y. resident born in Carolina, Puerto Rico. “She’s a champion in her own weight class, but I hope I made everyone proud and happy and that SHOWTIME will have me back again. I’m hoping that I made some of these people here fans of women’s boxing and that I made the sport proud.”

Serrano dominated the fight from the opening bell, but Mercado showed guts and guile to escape any finishing blows. Serrano out-landed Mercado 160-95 in total punches while landing 41.5 percent of her power punches. Showing very little signs of fatigue, Serrano landed and threw the most punches in the fight in the final round, pushing for a knockout that didn’t come. She now has her sights set on a future super fight with Ireland’s undisputed lightweight champion Katie Taylor.

“I want that fight with Katie Taylor in the future,” she said. “First I want to fight the other featherweight champions and become undisputed in my weight class. Then we’ll have two undisputed champions against each other when Katie and I fight.”

The pay-per-view telecast also saw promising British heavyweight contender Daniel Dubois (17-1, 16 KOs) make his U.S. debut in style, knocking down Juiseppe Angelo Cusumano (19-4, 17 KOs) three times en-route to a first-round stoppage. Dubois landed nearly everything he threw on the overmatched Cusumano, who was finished off by a barrage of punches 2:10 into the fight.

Dubois has now won two consecutive fights since dropping his lone contest to the undefeated Joe Joyce in an exciting 2020 fight. With that loss in the rearview, Dubois is now looking ahead to bigger and better fights.

In the second pay-per-view bout, Cleveland’s Montana Love (16-0-1, 8 KOs) scored a vicious TKO over former world champion Ivan Baranchyk (20-3, 13 KOs), thrilling the hometown fans who were on their feet for the duration of the action-packed slugfest.

The southpaw Love landed a flush left uppercut in the closing seconds of the seventh round, sending Baranchyk to the canvas. While the wobbled Baranchyk beat the ten-count, trainer Pedro Diaz informed referee Lonnie Scott that he did not want his fighter to continue into the eighth round. At the time of the stoppage, Love was ahead on all three scorecards.

“This is a dream come true,” said the 26-year-old Love following the fight. “I’m in training every day thinking about and visualizing this moment. I want to thank Ivan for giving me this opportunity and helping us give the fans a great show. We’d been working on that uppercut the whole time during training. The game plan was to move and box him and make him miss. We knew that eventually, he was going to open up.”

In what was Love’s career-best performance, he demonstrated his power, accuracy and defense. He landed 44 percent of his power punches while holding Baranchyk to just 45 total landed punches. Love hurt Baranchyk, a power-punching champion who was involved in 2020’s consensus Fight of the Year, several times throughout the fight with a heavy left hand. Love now believes he’s ready for the best of the best in the 140-pound division.

“Strap me up. We’ve been working hard and now it’s my time. I want Josh Taylor and Gervonta Davis. Line them up and we can make it happen, as soon as possible.”

In the opening bout of the PPV telecast, Tommy Fury (7-0, 4 KOs), the younger brother of heavyweight world champion Tyson Fury, successfully made his U.S. debut by scoring a four-round shutout over combat sports veteran Anthony Taylor (0-2). Already a crossover star after his runner-up finish on the hit U.K. reality TV show “Love Island”, Fury made a positive first impression on the American audience inside the ring but was unable to score the knockout he craved.

“I thought I had a good performance,” said the 22-year-old Manchester, England native. “You can’t forget that I only had 10 amateur fights and my dad wasn’t here with me tonight. I had a great time fighting in front of all these lovely people. I’m a novice in this game and I know that I have to work on everything. I’m nowhere near a finished product. I’m learning every single day and I’m just thankful to be here healthy and talking to you.”

Fury used his height and reach advantage in addition to his superior boxing skill to land 46 percent of his power punches on the outspoken former BELLATOR MMA fighter Taylor, who was competing in a professional boxing match for the second time in his career and first time since 2017. Fury now hopes to parlay his victory into a matchup with Jake Paul.

“Jake Paul should have an easy night against me, right? He has no excuse to not take the fight. Let’s get it on Jake Paul.”

Prior to the start of the pay-per-view, Cleveland native and U.S. Olympian Charles Conwell (16-0, 12 KOs) continued the impressive start to his professional career by overpowering previously-unbeaten Mexican Juan Carlos Rubio (18-1, 9 KOs) to score a third-round TKO in a scheduled 10-round super welterweight bout.

Tonight’s main event as well as Baranchyk vs. Love will air on SHOWTIME this Saturday, September 4 at 10:10 P.M. ET/PT. The delayed telecast will be immediately followed by the premiere of ALL ACCESS: JAKE PAUL VS. WOODLEY EPILOGUE. The epilogue spotlights the eventful week in Cleveland, goes inside the ropes during the fight and reveals the dramatic aftermath of an event that captured the attention of boxing, MMA and entertainment fans alike.