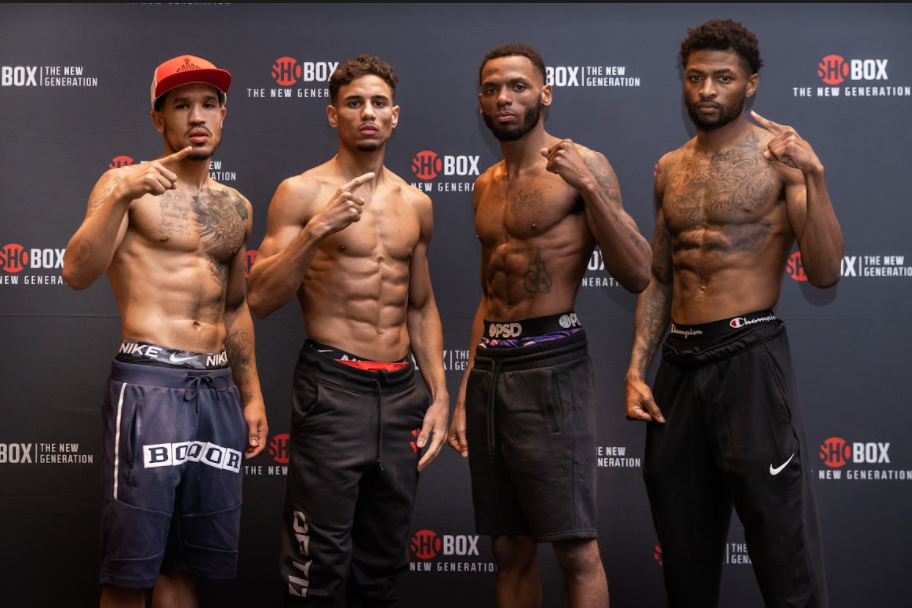 ORLANDO, Fla. – February 17, 2022 – Exciting rising prospects Jamaine Oritz (14-0-1, 8 KOs) and Nahir Albright (14-1, 7 KOs) both made weight Thursday, a day ahead of their 10-round lightweight main event on ShoBox: The New Generation this Friday, February 18, live on SHOWTIME at 9 p.m. ET/PT from Caribe Royale Resort in Orlando, Fla.

The doubleheader is promoted by Marshall Kauffman’s King’s Promotions.

Note: All refs and judges for both fights reside in Florida.

* Contracted weight limit is 152 pounds; both fight camps agreed to proceed with fight.

“A lot is always at stake when I fight, an undefeated record is at stake. He’s a slick boxer. He can box if he wants to, and he can be aggressive as well. He’s another hungry Philly fighter. I just plan on being the best Jamaine Ortiz that I can be. I’m going to be the technician with correct movements in there, and I’m going to be focused on having fun on Friday night.

“From the fight with Joseph Adorno [last April, which ended in a majority draw and saw Ortiz hit the canvas twice over eight rounds], I learned not to be so anxious. Being down after the knockdown in the second round made me feel like I had to pick it up and show that I was winning the fight. I was very anxious. Now, this fight is a 10-rounder, and I feel I can take my time a little and be patient and effective and just take it round by round.

“I do have a lot of outside interests, but I give boxing 100 percent, and when it comes to fight time, I don’t do real estate. I don’t do anything except focus on the fight. I wake up and go to the gym. When I’m in that six-to-eight-week camp, that’s all I’m focused on. Nothing comes in between that.

“I hope I can increase my profile and be thought of as one of the best at 135 pounds from this fight. I just don’t know if the opponent’s name is big enough, where I can join that list of other big-name fighters at 135. With the NABF title, if I get ranked in the top 10 in the world, hopefully I can begin to put my name in the conversation with the best at 135 pounds. That’s my goal.

“When I fought Teofimo Lopez in the finals of the national golden gloves in the amateurs, I didn’t think he beat me bad at all. My coach had to fly out the night before. I feel like if I had my coach, I would have done better. When I fought Teofimo back then, he wasn’t the puncher he is today. He was nothing like that. It was more of a boxing match. We were both boxing each other.

“If this fight becomes a Gatti-Ward type of fight, then I’m OK with it. I’ve lived through that before and I’m fine going through that again. If he wants to come at me, it will be an easier fight for me. I’m going to be focused, and I’m going to stick to my game plan.”

“I’ve worked all my life for this opportunity. It just feels so surreal being here. I’m definitely excited and ready to showcase my talent.

“I expect Ortiz to bring the fight to me. You’re all about to experience some fireworks. You’re all about to experience [Manny] Pacquiao versus [Juan Manuel] Marquez. Arturo Gatti versus Micky Ward. I feel like the world’s in for a fight they haven’t seen in a long time. I feel like my boxing ability and my slickness are something he’s never seen before.

“Beating guys like Jeremy Hill and Michael Dutchover in my last two fights definitely boosted my confidence and gave me extra validation on what I already had. It showed that I can have the odds against me, but that I could still come out on top. It showed I could go through some adversity and still be a winner.

“My singing is for a real. Like, I’m a singer for real. I grew up singing. I was a singer before I was a boxer. Singing is definitely going to play a part in my career. I got a surprise for the world. I’m not going to sing Boyz II Men again. It’s something new.

“I’m coming to hurt my opponent. It’s seek and destroy. It’s kill or be killed out there. I come to fight and don’t just try and box and win by decision. I come to fight.

“With an impressive win over Jamaine Ortiz I could see myself fighting Ryan Garcia, Rolly Romero. Any of those tough guys. I can see it definitely by the end of 2022 or the start of 2023 you will see my name next to those guys.

“Even though I’m training in New Jersey, being a Philly fighter never leaves. It’s all in me, for real. You can take a person out of the ‘hood, but you can’t take the ‘hood out of the person. That’s real. That dog’s definitely in me.”

“I’m very happy to have this opportunity. This is what I’ve been waiting for. Going through what I went through when I was younger [with his legal issues] helped me a lot from a maturation standpoint. It helped me grow up and made me more mature. When I was younger my boxing career was moving so fast. I won the U.S. Olympic Trials. The experience that I went through made me slow down and spend time working on myself.

“People who know boxing know who I am. The real boxing fans know me. Fighters know me. I beat most of them in the amateurs, so they know me. Now, I’m just getting the opportunity to show what I can do.

“He’s tall, but he doesn’t know the game… There are different levels in this sport. He’s going to bring his ‘A’ game but it’s not going to be enough. I’ve seen a million fighters like him, but he’s never seen a Paul Kroll. I’m going to show my class on Friday night.

“I’m just a better all-around fighter than he is. I can box, fight on the inside and outside. My jab is better than his. Everybody I fight throws a lot of punches, and they always slow down as the fight goes on. [Former opponent Lucas] Santamaria threw a lot of punches, too…. When I touch him, he’s going to feel it.

“He’s just too small, he’s too light. I’m just an all-around better fighter. When I’m on my ‘A’ game, I don’t think there’s anyone who can beat me right now. I fought a million people who were 6’1” in the amateurs. My best asset is that I can adapt on the fly round-by-round. Not every fighter can do that. Only the great ones.

“A win puts me in a better position to get a bigger fight. When it happens, it will happen at 154 pounds. I’ve grown out of welterweight. I can’t make 147 anymore. I’m going to stay at 154 pounds and get a big fight, hopefully back on ShoBox and SHOWTIME. This is a good audition and I’ve always passed all my tests with flying colors.

“That knockout he has on his record doesn’t work. My daughter could have knocked out that opponent [Esteban Alseco]. He’s going to be a volume puncher, but he can’t crack an egg. At the same time, anytime someone has on 10 oz gloves, if you get hit by a punch the right way, it can hurt you.

“I learned a lot from sparring with guys like Shawn Porter, Danny Garcia and Julian Williams. I learned a lot about myself. I learned how to recognize mistakes that other, younger fighters make. Younger guys, when they’re coming up, they try so hard to make an impression, and they end up making a lot of mistakes. Against someone like Julian Williams, I would do something and then admire my work and he would catch me after I threw my punches. Once I started to recognize that, I started to play the older and more experienced role. I’m more mature mentally now, and I know how to take advantage of other’s mistakes.

“I got my own gym, so I have my own schedule. I can train at any time. I train two or three times a day. I’ll get up before work and work out and then after work I train again. Sometimes I train late at night, like Floyd [Mayweather Jr.] used to do. I’m always in the gym.”

“I’m honored to be on ShoBox, which has always been a true proving ground for up-and-coming stars of boxing. To be on this platform and prove myself is all any boxer ever asks for.

“The boxing world is finally going to get introduced to someone who will one day be one of the biggest stars in boxing. I know the styles and skills that I possess and all the tools I have in the toolbox will finally be on display before a nationally televised audience.

“I would describe my fighting style as really awkward, but aggressive and rough and relentless. Defensive. It’s like a style you’ve never seen from someone 6-foot-1. With the length and height that I have you would automatically assume this guy is a boxer or a counter-puncher or a runner. But I actually love fighting on the inside and getting in a phone booth. Just giving the fans what they want but also being defensive.

“I want Terence Crawford, Errol Spence. I want that type of level. I possess a style that nobody else has. Covid didn’t stall my career. I was able to perfect my style and get stronger and ready to show the best Marquis Taylor that you’ve ever seen.

“Kroll is a good fighter. I never look past any of my opponents. I know he’s fighting for his life just like I’m fighting for my life. So I give all the respect to him, but I know with all the adversity I’ve been through and when you look at his resume and you look at mine, it’s a little different.