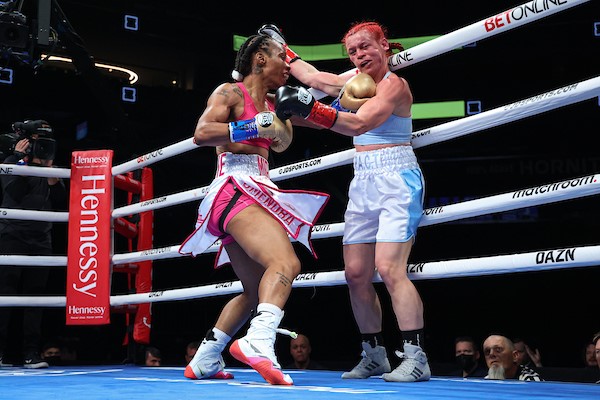 New York (February 7, 2022) – This past Saturday night, Jamie Mitchell defended the WBA Bantamweight title with a four round destruction over Carly Skelly at The Footprint Arena in Phoenix, Arizona.

The fight was Live on DAZN.

Mitchell is managed by Split-T Management under the guidance of Brian Cohen’s Empire Boxing.

At the end of round one, Mitchell dropped Skelly with a hard left hook. Mitchell scored another knockdown in round two with a big right hand. In round four, Mitchell landed a vicious flurry of punches that included flush rights hands that snapped Skelly’s head back, and the fight was stopped at 1:32.

“It was cool, my first defense and my most precious fight as a pro,” said Mitchell. “Shout out to Claressa Shields for getting the win in the UK tonight, we had great sparring in the build-up so thank you to her for that. She’s truly the GWOAT and an inspiration.

“If you are going to run at me, I’m going to stop you in your tracks and that’s what happened.

I am only going to get better, we train all year round, people are sleeping on me but I’m going to slowly wake them up.”