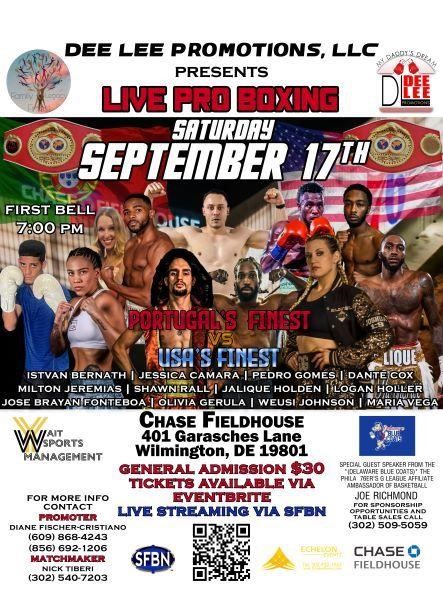 (September 12, 2022) -Wilmington, DE- Dee Lee Promotions, LLC in association with Family Legacy Finest and Matchmaker, Nick Tiberi, return to the Delaware boxing scene with an International Boxing card on Saturday, September 17, 2022 at The Chase Fieldhouse, 401 Garasches Lane, Wilmington, DE 19801. This exciting fight night is highlighted by TWO American Boxing Federation Title fights and TWO female bouts that could easily have been world title bouts! This exciting 11 bout professional boxing card will be held in the memory of Mike “Mighty Mike” Tiberi, a fine man and former Delaware professional boxer who will long be fondly remembered and missed by family, friends and fans throughout Delaware and the entire tri-state area.

Dante “The Red Cornet” Cox, of Wiesbaden, Germany by way of Glen Burnie, MD and his opponent Raekwon Butler of Brooklyn, NY will face off for the ABF Lightweight Title in this duel Main event! Though Cox is the more experienced of the two, Butler intends to give as well as he takes in what should be a battle of grit and wills beginning to end. Sharing the top billing on this dynamic fight card are two middleweights, Eslih Owusu from Ghana by way of Worcester, MA and his opponent DeWayne Williams of Philadelphia. Owusu does have the advantage of facing international competition, but he’s facing a Philly fighter in what amounts to Williams’ backyard, so all bets are off. Four, yes that’s four fighters chasing two titles would seem to add up to a thrilling night of professional boxing and Delaware fight fans are in for a treat!

Two different high quality female bouts highlight this 9-bout undercard and each of the two were seriously considered for titles fights! Jessica “Cobra” Camara of Montreal, Canada and Maria Vega of Quito, Equador, a pair of top talents in the women’s lightweight division each have plenty to win or lose in this bout. Camara is a top ten-ranked fighter and a convincing victory against the highly regarded Vega could place her directly in line for a title shot. Vega knows she’s only a win or two away from a top 10 ranking herself and the money and respect that goes with it. The always crowd pleasing Olivia ‘The Predator’ Gerula takes on an extremely tough young talent Logan Holler of Columbia, SC in another 6 round battle. Gerula has fought on 4 continents, held 3 different titles and fought many of women’s boxing top talents including Kathy Collins, Mia St John and Amanda Serrano. Holler may lack Gerula’s experience, but she possesses lightning speed and strong punching power. It’s one of those classic wily veterans vs. young raw hungry talent match ups that so often brings a crowd to it’s feet and could prove to steal the show!

The remainder of the undercard include young talented lightweight Jalique Holden of Wilmington, DE stepping up to fight Charlie Clark of Dallas, TX, Iman Lee of Yonkers vs TBA and Michael Crain of Wilmington, DE are all slated to glove up. The card also features Jamar Leach vs Andre Davis, Ghandi Romain from Port-au-Prince, Haiti and young highly touted Adonis Wilkins of Philadelphia, Pa are all scheduled for their Pro Debuts. TICKET INFO: $30.00 GA can be purchased online via Eventbrite, https://www.eventbrite.com/e/357010486977 or purchased at the door fight night. Sponsorships/ VIP and Golden Ringside/ Table sales can be purchased by contacting Joe Richmond 302.509.5059. For more info contact: Promoter Diane Fischer 609.868.4243 or 856.692.1206 and Matchmaker Nick Tiberi 302.540.7203.