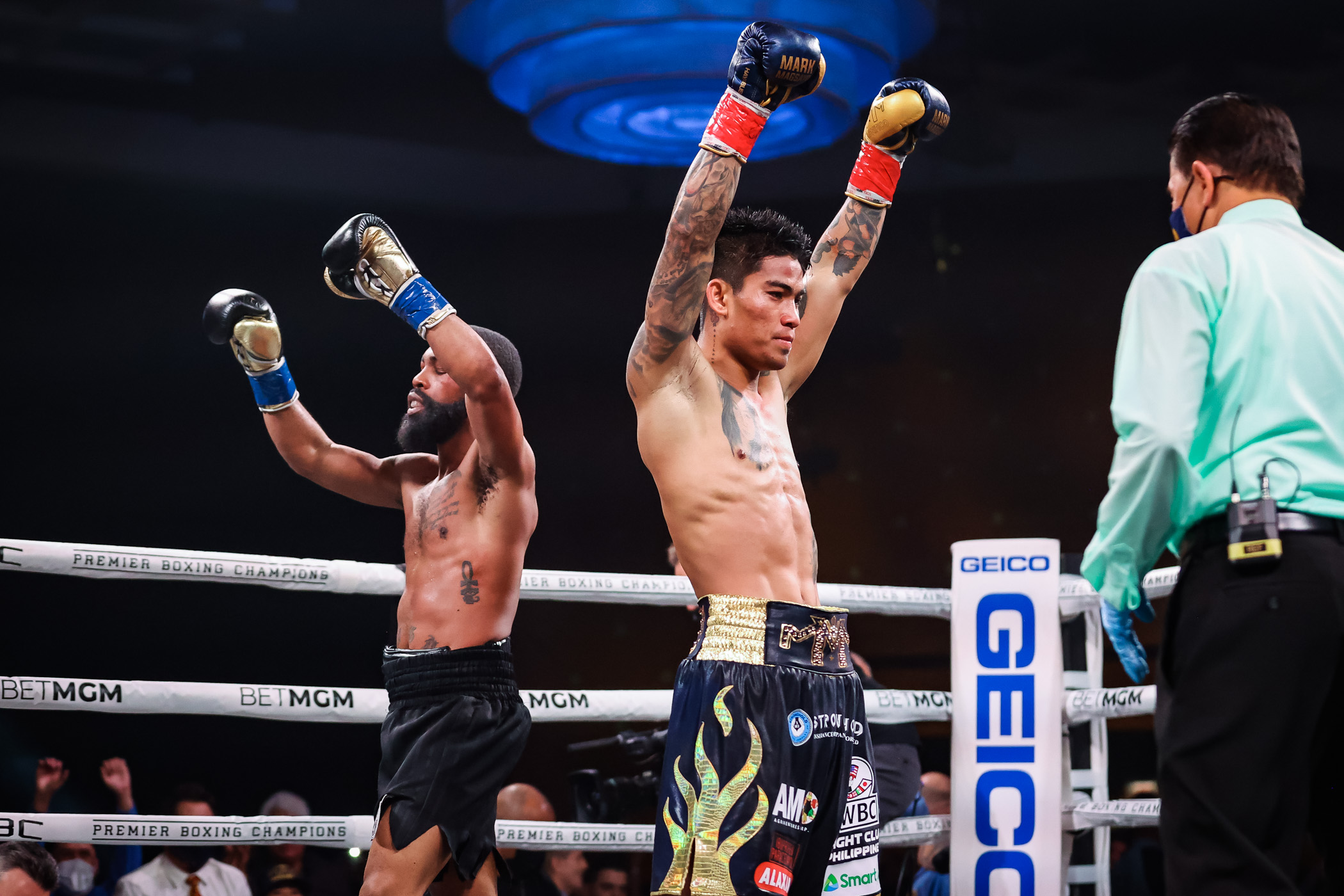 “This is my dream come true,” said Magsayo. “Ever since I was a kid, this was my dream. I’m so proud that I’m a champion now. Thank you so much to the Filipino fans for the support.”

A protégé of Filipino legend Manny Pacquiao, Magsayo (24-0, 16 KOs) was able to end the reign of boxing’s longest male world champion by defeating Russell (31-2, 18 KOs) across 12 hard-fought rounds. Magsayo was able to use his size advantage to lean on Russell throughout the fight and benefited from an apparent injury to Russell’s right shoulder that became discernable in round four.

“I believe I have a torn tendon in my right shoulder,” said Russell. “I haven’t competed in almost two years. This is what true champions do. I wanted to step into the ring and display my superiority regardless of the injury.

“I hurt the shoulder about two weeks ago,” continued Russell. “But I went through with the fight because I’m a true champion and this is what warriors do. I’m going to fight regardless of what the situation is. I refuse to not compete and display my skillsets to my fans and the people that came out to show support and love. Please believe that I will be back. I still want these fights.”

“I knew that he was hurt in round four,” said Magsayo. “I took advantage of it because he was only using one hand. This was my opportunity to follow through. My coach was telling me to use good combinations and follow through. He said this is your chance to become a champion and now I am a champion.”

Russell appeared to injure the shoulder throwing a short right hand and immediately winced in pain and retreated from the action. Russell was able to re-adjust his game plan and had success focusing solely on variations of his left hand. He slowed down the action and landed a number of clean shots to keep Magsayo at bay in a display of ring generalship, but it wasn’t enough to win over the judges.

The Freddie Roach-trained Magsayo was able to land 41% of his power shots in the contest, a significant improvement from the 28% clip that Russell’s previous eight opponents had connected on, according to CompuBox. Russell was limited to just 64 jabs thrown and was out-landed 150 to 69.

Magsayo continued to put the pressure on in the later rounds and was able to ride that activity to victory, including an attack that nearly dropped Russell late in round 10, thrilling the Filipino fans in attendance.

At the end of the 12 rounds, Magsayo edged out the decision on the judges’ cards with a 114-114 score overruled by two judges seeing the bout 115-113 for Magsayo. After the fight, Russell indicated that he believed he still won the fight, while Magsayo left open the possibility of a rematch.

“I believed in my skillset and what I bring into the ring,” said Russell. “I felt like I still won the fight to be honest. Hell yeah I want a rematch. Would he want a rematch? That’s the question.”

“It’s up to my promotional team,” said Magsayo when asked about a potential rematch. “But I’m willing to fight anybody. I’m the champion now!”

In the co-main event, super lightweight contender Subriel Matias (18-1, 18 KOs)scored a ninth-round TKO over Petros Ananyan (16-3-2, 7 KOs) after dropping Ananyan at the end of the round, prompting the referee to stop the fight at the suggestion of the ringside doctor between rounds.

The bout was a rematch of their 2020 match that Ananyan won by decision. Matias was able to earn revenge for his only career defeat and put himself on the path toward a world title shot. The bout was contested on the inside throughout, with Matias targeting the body early and often, while Ananyan had success with chopping shots to the head.

“This is the fight that I wanted,” said Matias, who was jubilant in victory following the fast-paced affair. “Ever since my defeat to him, I wanted to avenge the loss. When you’re sure about yourself and you know that you have the skills that you have, you take the rematch.”

Matias was able to rack up a 252 to 164 advantage in punches landed throughout the fight, including a 59-12 edge in body punches. Ananyan was more active than Matias by a 761-678 margin but Matias’ 37% connect rate out-paced Ananyan’s 21%.

Matias’ body attack backfired temporarily in round seven, as referee Mary Glover deducted a point early in the round. Matias continued to attack the body however, and both fighters continued to have strong moments through the end of the fight.

In the final seconds of round nine, Matias landed the decisive blow via a counter left hook that immediately badly hurt Ananyan and sent him to the canvas. Ananyan was able to get to his feet and was saved by the bell ringing shortly after. However, in between rounds the ringside doctor deemed that Ananyan could no longer continue and the bout was officially ruled a TKO after nine rounds.

“I’m not just a hard-hitter but the way that I fight is like cutting down a tree,” said Matias. “Just keep hitting them. I think I can improve my power but let’s see what happens with time. I want to thank everybody who made this fight possible, but I’m going to take my time before deciding who I will fight next.”

In the telecast opener, hard-hitting contender Tugstsogt Nyambayar (12-2-1, 9 KOs) and once-beaten Sakaria Lukas (25-1-1, 17 KOs) fought to a spirited split-decision draw after 10 rounds of super featherweight action. The fight featured a controversial ruling of a slip on an apparent knockdown for Lukas that would have given the late-replacement the victory.

The back-and-forth affair saw Nyambayar strike first, connecting in round one with a left uppercut that caused Lukas to stumble. Lukas was able to recover quickly, but fell behind across the early rounds as Nyambayar out-landed his opponent 67 to 46 across the first five frames.

Lukas began to work his way back into the fight, landing right hands off of a consistent jab, including an overhand right that appeared to hurt Nyambayar in round eight. After the right hand, Lukas landed a counter left that put Nyambayar on the canvas, but the knockdown was ruled a slip by referee Eddie Claudio.

“What I saw in real time, he fell down not from the impact of the blow but from his body language, he just slipped. His feet went and he slipped,” said Claudio post fight to ringside reporter Jim Gray.

The potential missed knockdown call turned out to be the difference in the fight, as Lukas won at least three of the last five rounds according to all three judges. The final tallies were 96-94 for Nyambayar, 96-94 for Lukas and 95-95, resulting in the split-draw.

“I thought I won the fight and I didn’t believe it was a knockdown,” said Nyambayar. “It was a hard fight, especially against an opponent on short notice. My goal is to fight for the world title again.”

“Everyone saw it was a knockdown that should have given me a split-decision win,” said Lukas, who endured a 27-hour flight to the U.S. for the bout from his native Namibia. “I fought my heart out and I deserved the win. I took the fight on short notice, but I was ready to win. I believe I won the fight, but I can’t do anything about the decision. We had the fans behind us, they know what happened.”