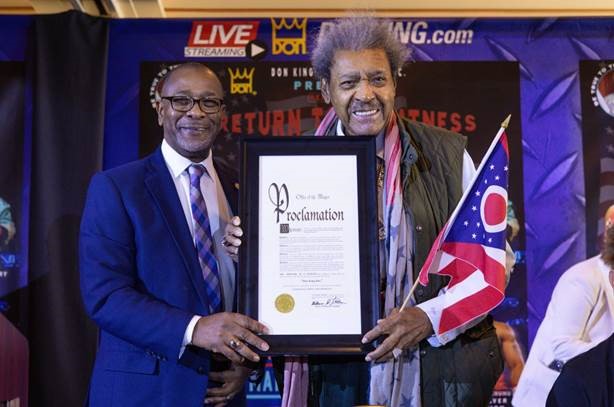 (Note: Fast forward to the 31:10 for the start of press conference)

All four fighters joined eight others who will compete for four more championship belts in the final press conference for Don King Productions’ “RETURN TO GREATNESS” on Wednesday at the Grand Hotel. Johnnie Langston (9-3, 3 KOs) of Sarasota, Fla., will square off against Nick Kisner (22-5-1, 6 KOs) of Baltimore, Md., in a 10-round bout for the NABA Cruiserweight title and Ahmed Hefny (13-1, 5 KOs) of Queens, N.Y., takes on undefeated Decatur, Ga., prospect Dacarree Scott, who has a perfect record of 6-0 with 6 KOs. Plus, West Virginia’s Cody Wilson (10-3, 7 KOs) meets New York’s Tre’Sean Wiggins (12-5-3, 6 KOs) in an NABA Middleweight Title Bout and the NABA Middleweight Championship will be up for grabs as local product Michael Moore (18-3, 8 KOs) of Cleveland, Ohio, will meet Anthony Lenk (17-7, 7 KOs) of Niagara Falls, NY.

Tickets are on sale at Ticketmaster or the W.D. Packard Music Hall. The fight card will be televised through
Donking.com, DKPBoxing.com, or Itube247.com beginning at 6 p.m. ET at a cost of $49.99.

“We’re going to have a sensational evening of boxing. I am very pleased to be home again. It will give people a chance to have fun again. No one should take it lightly. It would be much better if you take the vaccinations and the shot, where your mask and socially distance.

“We are here to give you a moment of respite. Hey everybody, let’s have some fun. Live it once, and when you’re dead, you’re done. No matter whether you are young or old, let the good times roll.

“I have to thank God because we had a governor (of Ohio) who reduced the charge for me, basically because he said it wasn’t possible. Nevertheless, he put his reputation on the line. They sent me to the Ohio penitentiary. They said they were going to give me shock probation. I had never been arrested so they were going to give me 30-90 days. I ended up doing four years. I made the time serve me. I educated myself in the penitentiary. When I came out of the penitentiary, the good citizens of Cleveland were waiting to tell me about the hospital that was going to be closed down for lack of funds and would I promote a fundraiser for the hospital.

“I called Muhammad Ali to come in and box five or six guys. In so doing, we would raise money for this hospital. He told me that I was the greatest promoter he had ever seen, and I should go into boxing. So, my first fight was Muhammad Ali. We made history together. Then he got convicted by not taking that step into the Army. He was sentenced to five years and a big fine at the height of his career. He stood as a conscientious objector. The United States Supreme Court reversed that decision. Ali then came back and made history again with me promoting him.

“The four years that he (Ali) was out, no one knows how great he would have really been because he was at the top of his career. Plus, he would have made millions of dollars during those four years.

“You’ve got to say, ‘Muhammad Ali take a deep breath. Float like a butterfly, sting like a bee. Your hands can’t get what your eyes can’t see.’ He was so fast that he could turn the switch off and get in bed before the room got dark.”

“I hope everybody knows who I am. I’m very thankful for this opportunity to be here today in front of you guys. I’m very thankful to Don King Productions for making this event happen because plenty of events have been disturbed by COVID. I’m very happy to be here and to have the opportunity to defend our title on January 29. I don’t have much to say. I just want to say good luck to my opponent Thabiso Mchunu because this is the second time I’m fighting him now. Thanks to all who come to support us. Thanks to my team. Enjoy the fight on the 29th.”

“The hard work has been done. Come fight night, I am ready to go. All the best to everyone who is fighting on Saturday night.”

“I am here to stay, to keep proving myself. I have a strong opponent in front of me in Jonathan Guidry. I appreciate him being out here. This is a big opportunity for him as well. We are going to show it out for you in Ohio and showcase all this talent for the whole world to see.

“All the hard work is done. I am just glad we got the opportunity. We are just thankful to be out here to shock the world.”

“I am very excited about this fight card here at W.D. Packard Music Hall. I fought six times here in 1980 on the way up. I had a fight here against Jose Luis Ramirez to defend my North American belt. It is a great venue. It is just a great facility for boxing. It’s great to have championship boxing back here in Warren, Ohio.”

“We are very proud, honored, and happy to be hosting this event. I know what we’re about. I am thankful to you, Mr. King for letting us be the host of this great event seen by boxing fans worldwide. Who would have thought that Warren, Ohio, would be the host?

“On Saturday night, by the benevolence of Mr. King, we are going to have a record number of our safety forces at the fight. We’re going to host more than 175 police officers, firefighters, and health care workers. They have been protecting us for almost two years.

“Mr. King, I tried to capsulize what people don’t talk about; your heart, your life, your spirit, your experience, your strength and hope that you give to so many people.”

BERNIE PROFATO: Executive Director of Ohio Athletic Commission
“In 1972 Don King called me and I was a young referee at the time. He asked if I wouldn’t mind donating my time because they were going to do a boxing show for this hospital. I said, ‘Don, for you, absolutely anything.’ Don King is the only person in the state of Ohio that I have issued a lifetime boxing license to. No one deserves it more than him. This is probably the greatest overall fight card in the 20 years that I have been at the Ohio Athletic Commission to be promoted in Warren, Ohio. I am so honored that Don has done this.”