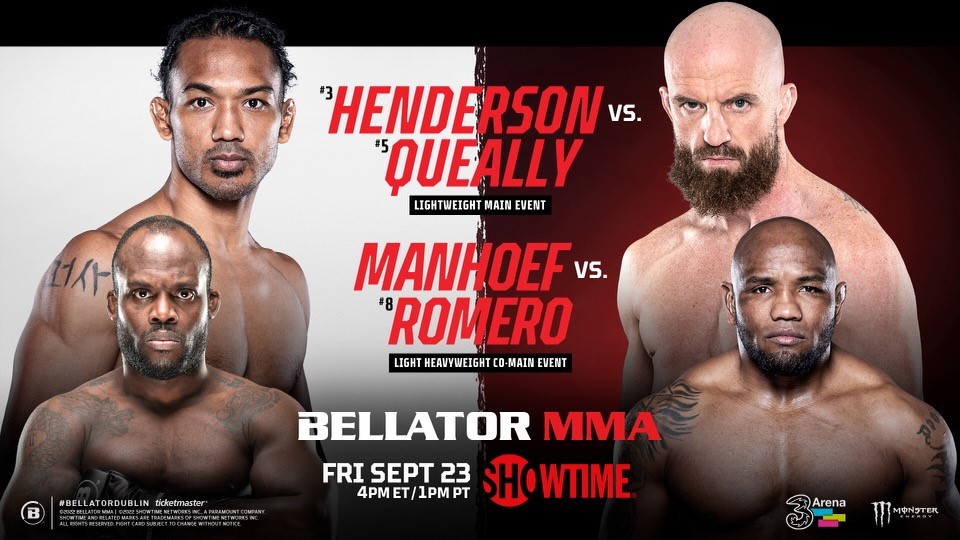 DUBLIN, IRELAND (May 20, 2022) – Today, BELLATOR MMA has confirmed the latest bout listing for its return to Dublin’s 3Arena on Friday, September 23, with hometown hero and No. 5-ranked Peter “The Showstopper” Queally(13-6-1) set to headline the card against No. 3-ranked Benson “Smooth” Henderson(29-11). The five-round main event is supported by a mouthwatering cast of top MMA talent, featuring legends of the sport, homegrown stars and international challengers hoping to spoil the Irish party.

Tickets for BELLATOR DUBLIN are now on sale and can be purchased at Ticketmaster.ie and Bellator.com.

In the co-main event, No. 8-ranked light heavyweight veteran Yoel “Soldier of God” Romero (14-6) will again attempt to lock horns with Melvin “No Mercy” Manhoef (32-15-1) following the Dutchman’s withdrawal from their scheduled clash at BELLATOR 280 due to sustaining a hand injury in the lead-up to the fight. To heighten the stakes even further, the fight will mark the end of Manhoef’s legendary combat sports career.

In what is expected to be an electrifying atmosphere as BELLATOR returns to Dublin for the third time in the space of a year, the roaring Irish faithful will welcome home their very own No. 7-ranked James “The Strabanimal” Gallagher(11-2) who has now been confirmed to compete in a highly anticipated bantamweight clash against Brett Johns(18-3).

Meanwhile, Drogheda’s undefeated featherweight, Ciaran Clarke (5-0) has been rewarded for his impressive recent performances on the last two Dublin cards with a jump onto the main card where he will face France’s Georges Sasu (5-2). Clarke will be backed all the way by the Irish crowd after successive exciting performances, but a victory will not come easy as Sasu aims to respond following his split decision loss to Ilias Bulaid at BELLATOR 270.

Irish star Peter Queally will make his comeback from injury after his recent withdrawal from BELLATOR 275, as he looks to launch a renewed charge for the world title in front of his home crowd with a commanding victory. Standing in his way is the formidable challenge of Benson Henderson who is coming off of a huge win against the highly regarded Islam Mamedov. The American is familiar with the partisan Dublin crowd having previously fought back in September 2019 at BELLATOR 227, scoring a unanimous decision win against Myles Jury. Henderson will be looking to replicate his past success on Irish soil and silence the home crowd.

After a dominant performance and last-second knockout against Alex Polizzi in Paris earlier this month, Yoel Romero will be hoping to follow up with a convincing win in a rescheduled clash against Melvin Manhoef. After the pair faced-off in the cage in Paris, “No Mercy” will be looking to live up to his nickname and respond after his recent loss to Corey Anderson in November 2020 at BELLATOR 251. With both fighters possessing true explosiveness and striking power, this bout is certain to grab the attention of all fight fans.

In addition, James Gallagher is set to make another homecoming when he takes on Welsh star Brett Johns. This will be Gallagher’s first fight since suffering heartbreak in the same arena to Patchy Mix last year at BELLATOR 270. Prior to that defeat, the Irishman had enjoyed a four-fight winning streak and will be aiming to regain momentum and return to winning ways. However, he takes on a tough opponent in Johns, who earned his first win since joining BELLATOR after an impressive display against the previously unbeatenKhurshed Kakhorov last time round in Dublin, and he’ll be aiming to build on his strong professional record and climb into the official bantamweight rankings.

Confirmed for the preliminary card is Ireland’s Brian “The Pikeman” Moore(14-9) who returns to the cage in a bantamweight match-up against BELLATOR debutant Arivaldo Lima da Silva (19-10) and Manchester’s Kane “The Danger” Mousah (13-4) gets another opportunity to compete in Dublin following his cancelled co-main event against Peter Queally at BELLATOR 275 as he faces Georgi Karakhanyan (31-13-1) in a lightweight battle.