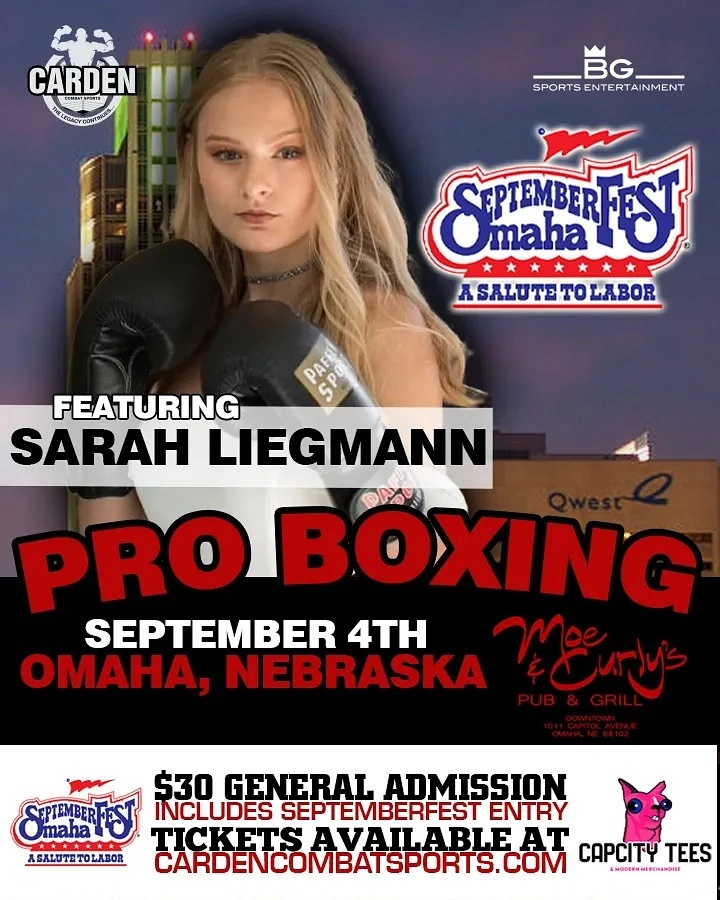 Inspired by female combat sports superstars Claressa Shields, Holly Holm, Amanda
Serrano and Kayla Harrison – all of whom have excelled and pursued a second combat
sports discipline during their careers as female sports icons – Sarah has chosen a
unique path as a European woman who is beginning her professional career in the
The United States. She has also demonstrated her seriousness of purpose by choosing as
her boxing coach and mentor the trainer of champions John David Jackson, a former
professional boxing champion himself who has trained Claressa Shields and Evander
Holyfield is among his list of superior talent. Liegmann and Jackson train in Jackson’s
home state of Florida.
Liegmann is the latest boxer to join the roster of top female talent managed by former
HBO PPV head Mark Taffet under his Mark Taffet Media banner. Other top females
boxers managed by Taffet include: 2-time Olympic gold medal winner and 10x world
champion in 3 weight divisions Claressa Shields, WBC Silver heavyweight champion
Danielle Perkins, WBC interim junior middleweight champion Patricia Berghult, and
Scotland’s first female world champion and current #3 world-ranked super welterweight
Hannah Rankin.
“I am so excited to be making my professional boxing debut in the United States on
September 4. It will be the realization of a lifelong dream for me,” said Sarah Liegmann.
“I have been training very hard for months with coach John David Jackson in Florida,
and I can’t wait to get into the ring and show the American fans my progress. I want to
thank my manager Mark Taffet and promoter John Carden for giving me this
opportunity. I will do my best to show the boxing world that I am ready for this challenge
and journey.”
“With an incredible 17 world amateur kickboxing titles at just 19 years of age, Sarah
Liegmann is one of the special young female athletes in the world and has a bright
future ahead of her,” said Mark Taffet, President of Mark Taffet Media. “Sarah deserves
tremendous credit for making her professional debut in boxing – a different sport than
the one in which she has earned incredible accolades her entire youth. She is fearless
and is looking to be a trailblazer and role model for young women the world over.”
“I’m thrilled to have the opportunity to test my skills against Sarah Liegmann on
September 4,” said Greensboro, North Carolina’s Kedra Bradley. “I have made great
progress with my new trainer Jeff Copeland, and I look forward to a great fight and a big
victory when I step in that ring in Omaha!