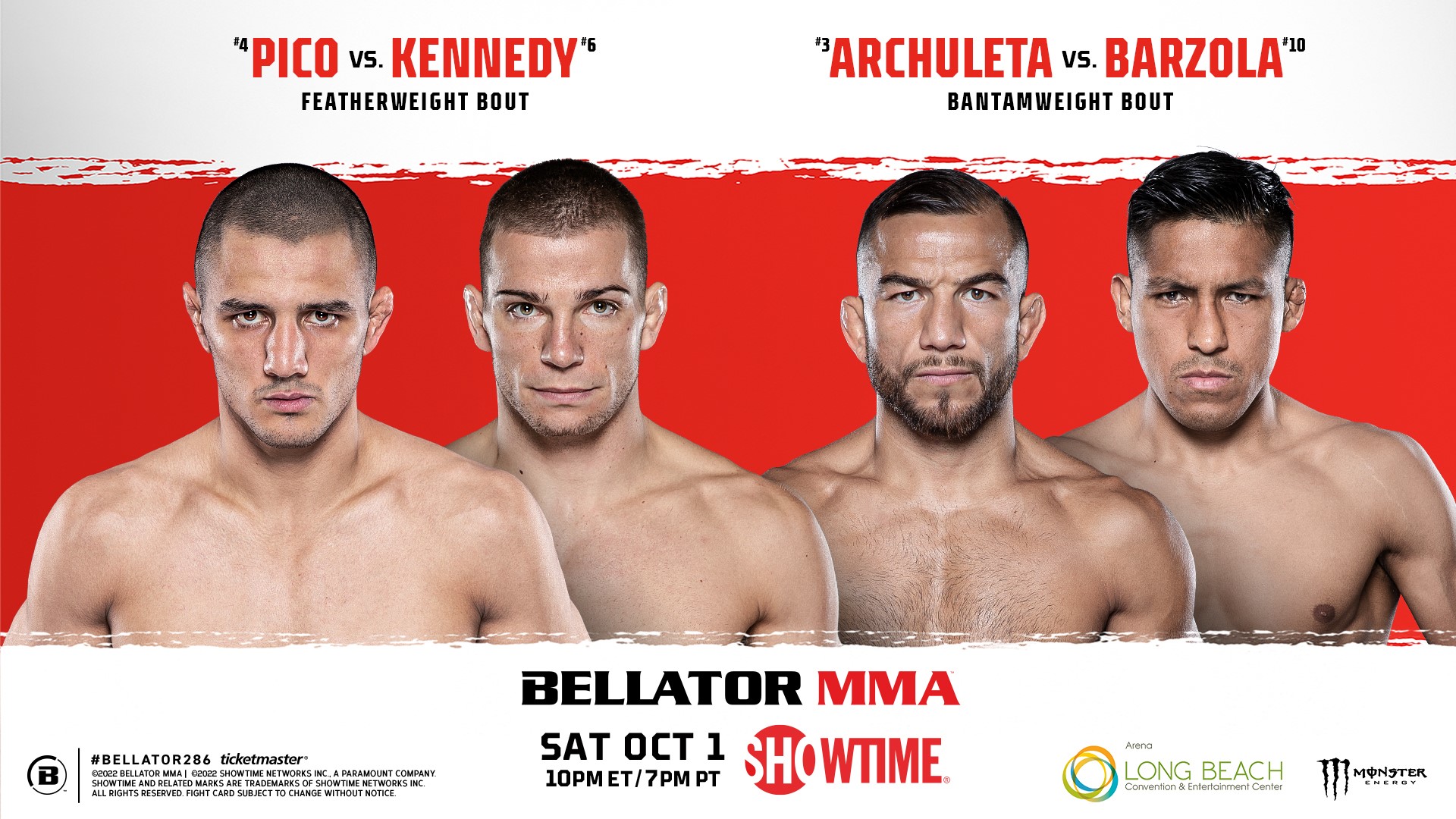 LOS ANGELES – The Southern California roots have strengthened throughout the main card of BELLATOR 286 on Saturday, October 1 at The Long Beach Arena in Long Beach, Calif. with the additions of two separate fights featuring athletes with SoCal ties.

No. 4-ranked featherweight Aaron Pico (10-3) will return to action in a main card scrap against Canada’s No. 6-ranked Jeremy Kennedy (17-3, 1 NC) in a fight that was originally slated to take place in April. Additionally, former bantamweight champion and current No. 3-ranked 135-pounder Juan Archuleta (25-4) takes on BELLATOR Bantamweight World Grand Prix Quarterfinalist and current No. 10-ranked 135-pounder Enrique Barzola (18-6-2).

The main card of BELLATOR 286: Pitbull vs. Borics will air LIVE on SHOWTIME at 10:00 p.m. EST, while the preliminary portion of the event will air free-to-watch beginning at 7:00 p.m. ET on the BELLATOR MMA YouTube channel, the SHOWTIME Sports YouTube channel, and Pluto TV.

The event is headlined by BELLATOR MMA featherweight kingpin and No. 1-ranked pound-for-pound fighter Patricio “Pitbull” (33-5) defending his World Championship against surging Hungarian Adam Borics (18-1). In an eye-popping co-main event, Long Beach’s native son AJ McKee (18-1) will make his lightweight debut, as the former 145-pound champion takes on Spike Carlyle (14-3), who rides a 5-fight wave of winning momentum into the high-profile fight.

Tickets for the massive event in Southern California will go on sale this Friday, August 12 with a special presale the day prior, and can be purchased Bellator.com and Ticketmaster.com.

Four preliminary bouts have also been added to the event, including a trio of lightweight contests. The first, a highly touted prospect and recent BELLATOR signee Max Rohskopf (7-1) will make his promotional debut against the MMA Lab’s Mike Hamel (9-5), who enters the fight on the strength of a two-fight winning streak. The second sees Islam Mamedov (21-2-1) look to continue the momentum he gained by defeating Zach Zane as part of BELLATOR’s co-promotional efforts with Eagle FC against former LFA champion Nick Browne (13-1), who has been perfect in two BELLATOR outings. Third, Hawaii’s Keoni Diggs (9-2) will look to return to the win column when he meets Brazil’s Ricardo Seixas (9-3). Rounding out the confirmed preliminary additions, a middleweight scrap pitting Khalid Murtazaliev (14-3) versus Khadzhimurat Bestaev (11-4).

One of BELLATOR’s most electrifying competitors, #4-ranked featherweight contender Aaron Pico (10-3), will return to his home state of California as part of a loaded main card offering. Pico, 25, remains one of the most compelling fighters in all of MMA thanks to his rare blend of youth, athleticism, and dominant performances. His punching power has led to his inclusion in countless highlight reels, and his world-class wrestling and burgeoning grappling skills have rendered him a potent threat in all facets of MMA. The winner of six straight fights — five of which came by stoppage during the span — will take on #6-ranked contender Kennedy in what promises to be a spectacle in Long Beach.

Looking to derail the hype train conducted by Aaron Pico is Canada’s Jeremy Kennedy. The 29-year-old has made an immediate impact in the BELLATOR featherweight division since joining the promotion in 2020. Against Pico, “JBC” (short for junior bacon cheeseburger) finds himself on the verge of title contention. With a recent win against former title challenger Emmanuel Sanchez, Kennedy is firing on all cylinders and could crack the top-5 of the division — and steal Pico’s momentum — with an impressive performance on a card headlined by the promotion’s top featherweights.

Former BELLATOR Bantamweight World Champion and the man currently ranked No. 3 in that division, Juan “The Spaniard” Archuleta returns to action when he faces No. 10-ranked Barzola on Oct. 1. The former champion has utilized his well-rounded skill set to secure wins over the likes of Patchy Mix and Henry Corrales in the past. Gearing up for his 11th outing with BELLATOR, Archuleta has consistently delivered finishes with 11 knockouts under his belt. Archuleta has meshed together his dominant wrestling and crisp boxing to once again bring himself to the pinnacle of the deep bantamweight division and once again looks to climb atop the heap.

With an impressive BELLATOR debut and TKO finish over Darrion Caldwell, the 33-year-old Enrique Barzola looks to get right back to it as he prepares for his fourth outing under the BELLATOR banner. Barzola did not waste any time as he earned himself back-to-back victories earlier this year including a dominant win over Russian powerhouse Nikita Mikhailov. Having five knockouts and four submission victories to his name, Barzola is comfortable wherever the fight goes, but his eagerness to be in the cage has paid off thus far as he finds himself as the division’s #10-ranked contender. With a win over #3-ranked Archuleta, Barzola could insert himself into the top-5 of the talent-stacked bantamweight rankings as well as inch closer to a title shot once the World Grand Prix concludes.