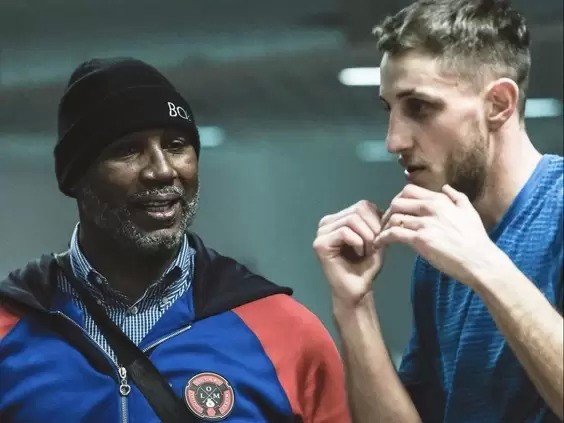 Born in Hungary and fighting out of Toronto, Daranyi won national amateur championships in both countries. As a pro, he’s 17-1 with 16 wins by knockout. The 27-year-old is trained by boxing legend Lennox Lewis and captured the Canadian welterweight title in his most recent bout, a second round knockout of Flavio Michel on May 7.

Daranyi’s opponent will be announced shortly

“I’m really excited to have Zsolt on the card,” said Michael Reyes, CEO of Reyes Boxing Promotions. “He has aspirations of fighting top welterweights, so winning impressively would be big step in the right direction.”

6’10 heavyweight Donnie Palmer of Dorchester, MA meets Argentina’s Ricardo “El Tigre” Ramirez in a six round contest. Palmer owns an impressive 11-2-1 record with 9 of his victories coming via knockout. The Palmer-Ramirez matchup is for the ABF heavyweight title.

Taunton, MA’s Marqus Bates meets Argentine Gabriel “Chilo” Calfin in a six round matchup for the ABF junior welterweight title. Bates, 10-4 (7 KO’s), is facing his most experienced foe to date in Calfin, who is a 44-fight veteran.

Undefeated middleweight Anthony “Big Daddy” Hines of Dorchester, MA puts his 8-0 record on the line against Diego Marocchi of Argentina in a six rounder for the ABF middleweight championship. On October 29, 2021, Hines scored his best victory to date, a unanimous decision over former world title challenger Fidel Munoz.

Casey James Streeter, 10-2-1 (4 KO’s), will swap leather with New Orleans’ Javier Mayoral in a six round junior middleweight bout. Hailing from Portland, ME, Streeter was a four-time New England Golden Gloves champion. In 2019, Streeter returned to the ring following four surgeries that were required after he suffered a near-death injury while working as an arborist.

Heavyweight Robert Sabbagh of Brooklyn, NY is also scheduled to fight in a four rounder against an opponent to be named.

“There’s a number of good New England area fighters on this card and three of them – Marqus Bates, Donnie Palmer and Anthony Hines – are fighting for ABF titles, said Reyes. “Casey James Streeter has an incredible story while Jason Quirk looks to keep his unbeaten record after being out of the ring for nearly five years. Michael Ogundo is fighting for the first time in Massachusetts after traveling all over the world to face top fighters and Kevin Rodriguez is always in exciting fights. The fans will definitely get their monies worth July 16!”

Tickets from $50 are on sale at KingsofCombat.Co and doors open at 6 pm with the first bell scheduled for 7.

Prior to the pro card, Reyes Boxing Promotions in association with Kings of Combat will host a special card featuring exhibition bouts. The exhibitions start at 1 pm and doors open at noon.

All exhibition bouts are scheduled for three 3-minute rounds. Every participant must pass the same pre-fight medicals as the pro fighters. The exhibitions will have a referee, judges, and medical personnel on site throughout the event.

Brandon Kelly, best known as “The American Ninja Warrior,” faces an opponent to be named in a lightweight contest, heavyweight Rob “One Eyed Wolf” Perez challenges Andrew “The Flesh Hammer” Felt and female welterweight Kacey “Hotwheelz” Wheeler will face an opponent to be announced.

Additional exhibitions will be announced shortly.

Tickets for the exhibition bouts are $30 and on sale at Kingsofcombat.co.

Those unable to attend the event can purchase the telecast of both the pro card and exhibitions at Kingsofcombat.co for $20.