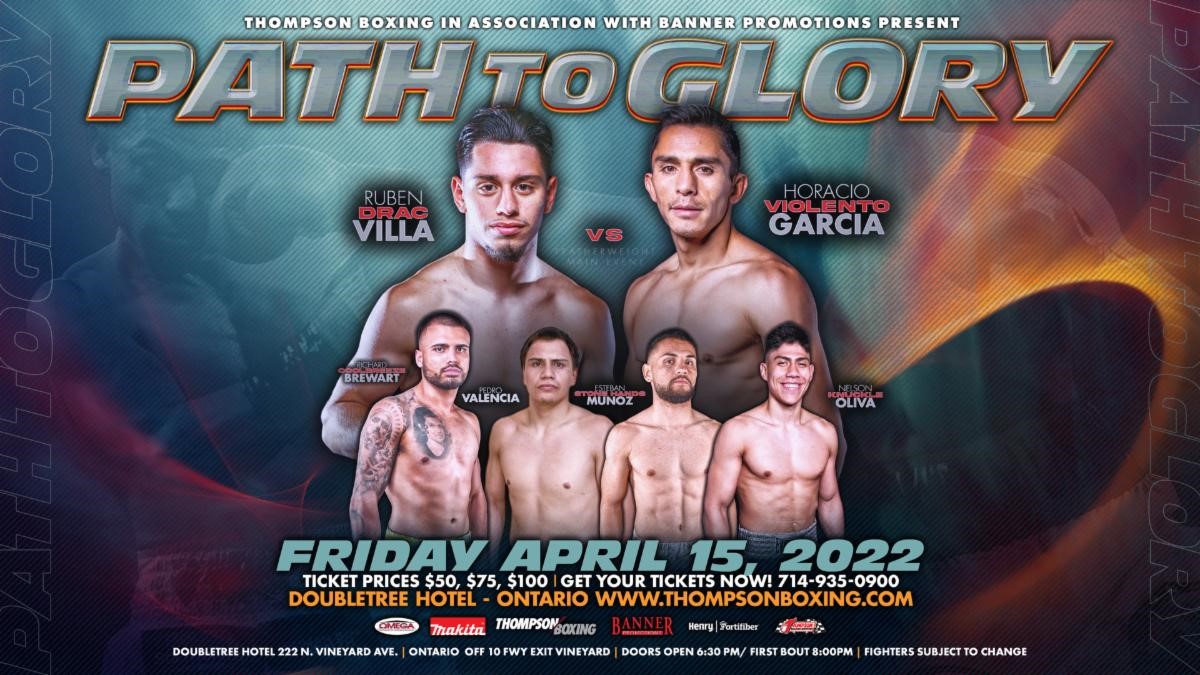 ONTARIO, CA (March 16, 2022) – Returning after his first chance at a world title, Thompson Boxing’s featherweight contender Ruben “Drac” Villa (18-1, 5 KOs), who is co-promoted with Banner Promotions, will make his 2022 debut as he headlines Thompson Boxing’s “Path To Glory” event on Friday, April 15, 2022. Villa will square off against battle tested veteran, Horacio Garcia (35-5-1, 25 KOs), of Guadalajara, Mexico in a 10-round main event.

As one of several talented Thompson Boxing fighters to challenge for a world title, Villa makes his long-awaited return to the ring. Villa’s last fight was a narrow loss against Emanuel Navarrete (35-1, 29 KOs) in October of 2020. After a year and a half break from action, Villa is energized and focused on his goal of becoming a world champion.

“I have fallen in love with the sport of boxing once again, the year or so I was out, I focused on all the things I need to improve on,” said Villa in the comforts of his newly remodeled gym in Salinas, California. “I have always said I want to bring a world title fight to Salinas, and that is still the goal. So, this is just the start of a new beginning, and a better version of myself. The road to redemption starts on April 15th against a worthy opponent in Garcia.”

“I am ready to start 2022 off on the right track and I’m looking forward to having a big year with Thompson Boxing,” said Brewart. “I’m going to make noise in my division this year. The goal is to fight as much as possible and work my way toward ten-round bouts by the end of the year. I know that fighting in meaningful fights gives me a chance at belts, and I want to collect as many of those as I can. I have not taken an easy road, and I will continue to show how talented I am in April.”

This event will stream live for free on the Thompson Boxing Promotions website (www.thompsonboxing.com), as well as their Facebook and YouTube pages. In addition, Fight fans will be able to watch all Thompson Boxing fights, weigh-ins, and behind-the-scenes content, via their new Mobile App downloadable on Apple and Google.

UNDERCARD BOUTS:
Lightweight Pedro Valencia (8-0, 7 KOs) of Las Angeles, Calif. will face an opponent to be named at a future date. (6-rounds)

For more information, regular updates on our fighters, events, and promotions, please visit ThompsonBoxing.com. You can also follow the conversation on social media, please use #ThompsonBoxing.