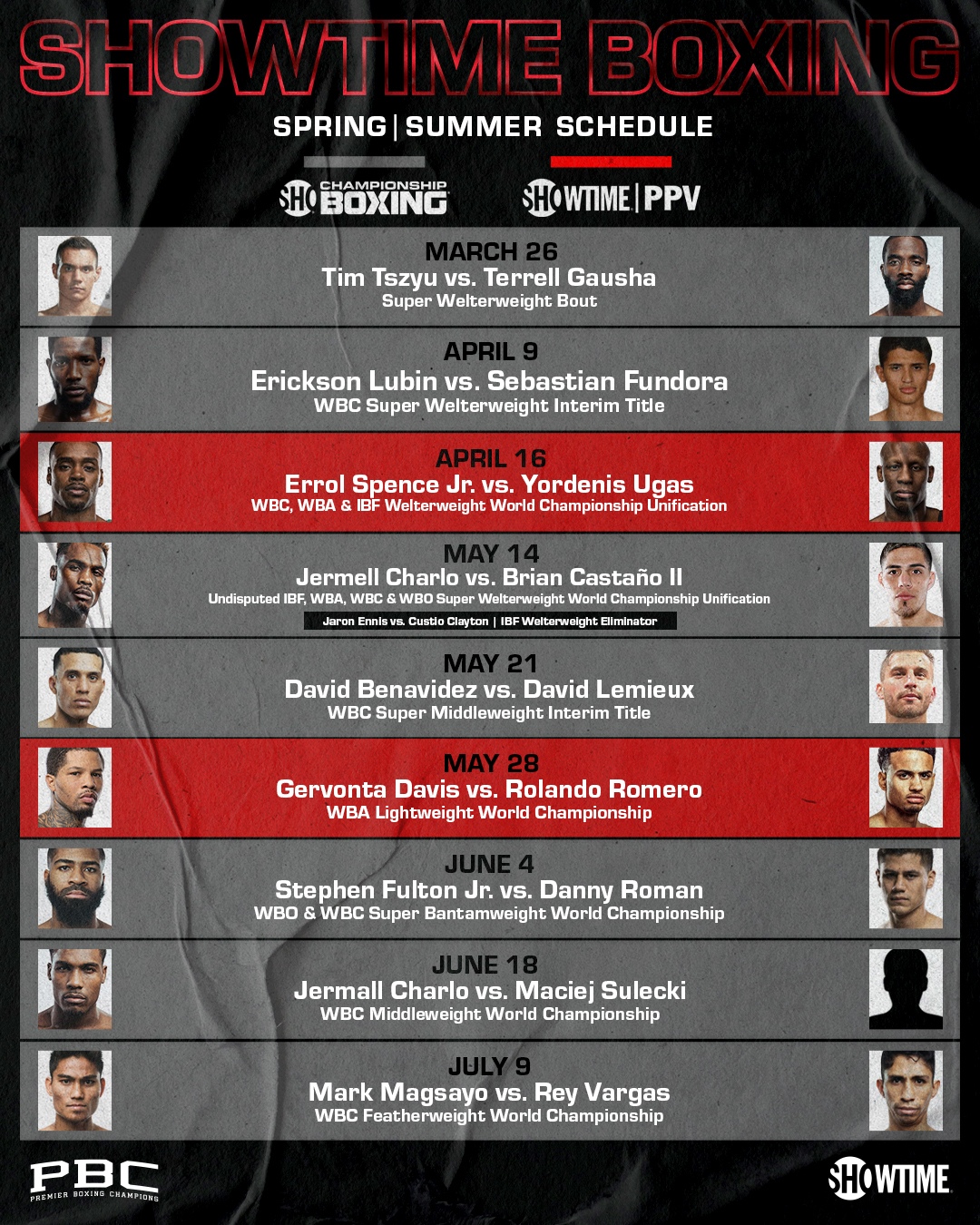 NEW YORK – March 15, 2022 – SHOWTIME Sports and Premier Boxing Champions today announced nine boxing events across the first half of 2022 featuring some of the sport’s most accomplished and dynamic stars in highly competitive matchups. The lineup pits champions against champions and top contenders against top contenders to form the strongest and most ambitious schedule in the industry.

There are also 18 fighters aged 27 years and younger including unified world champion Stephen Fulton, Jr., and highly regarded, undefeated welterweight contender Jaron “Boots” Ennis. With this emphasis on youth and kingmaking, SHOWTIME Sports and Premier Boxing Champions are well positioned to carry the sport into the future.

Arguably the best active welterweight of this era, the undefeated Spence, already a unified champ, will seek to collect a third world title when he puts his WBC and IBF straps on the line against WBA World Champion Yordenis Ugas on Saturday, April 16 in the main event on SHOWTIME PPV® at AT&T Stadium, home of the Dallas Cowboys. Spence-Ugas is only the 12th unification match in the history of the welterweight division, joining classic matchups such as “Sugar” Ray Leonard vs. Thomas Hearns I and Floyd Mayweather vs. Manny Pacquiao. The match is rich with intrigue as Spence attempts to claim supremacy in one of boxing’s deepest divisions, while Ugas, who nearly quit the sport, aims to complete a stunning turnaround after beating eight-division world champion Pacquiao in August.

Boxing superstar and five-time, three-division world champion Tank Davis will headline his fourth straight SHOWTIME PPV event against nemesis Rolando Romero on Saturday, May 28, at Barclays Center in Brooklyn, NY, for Davis’ WBA Lightweight World Title. The bout comes on the heels of Davis’ hard-fought 12-round unanimous decision win over Isaac “Pitbull” Cruz in which Davis overcame an injury in front of a star-studded, sellout crowd in Los Angeles last December.

WBO 154-pound No. 1-ranked contender Tim Tszyu, the son of Hall of Famer Kostya Tszyu, who fought many of his most memorable bouts on SHOWTIME CHAMPIONSHIP BOXING, will make his U.S. debut Saturday, March 26 against 2012 U.S. Olympian and top contender Terrell Gausha at The Armory in Minneapolis. The streaking southpaws Erickson Lubin and Sebastian Fundora will engage in a Super Welterweight Title Eliminator, for the WBC interim title, in the second of back-to-back, intriguing crossroads matchups in the division on Saturday, April 9 from Virgin Hotels in Las Vegas.

Jermell Charlo and Brian Castaño once again will seek to become the first undisputed 154-pound champion in the four-belt era and just the third overall undisputed champion today when they meet in a rematch of their 2021 classic on Saturday, May 14 in Los Angeles. Plus, rising welterweight star Ennis, possiblythe most talented boxer yet to win a world title, returns as the co-feature against Custio Clayton in an IBF Welterweight Title Eliminator.

Former two-time world champion Benavidez returns to action on Saturday, May 21 against knockout artist David Lemieux at 168 pounds in Phoenix, Ariz., in a bout between two of the sport’s biggest punchers.

Fulton, in his first bout since his title unification win in the 122-pound division against Brandon Figueroa, will defend his titles on Saturday, June 4 in Minneapolis, against former unified world champion Danny Roman in another can’t miss matchup.

Jermall Charlo will defend his WBC Middleweight World Championship for the fifth time on Saturday, June 18, when he faces former world title challenger, WBC No. 6-ranked Maciej Sulecki on the Juneteenth holiday weekend in Houston.

Additional high-stakes matches will be announced as individual fight cards fill out.

“It’s a good time to be a boxing fan and SHOWTIME viewer with so many high-level, consequential matchups on our schedule,” said Espinoza, President, Sports & Event Programming, Showtime Networks Inc. “We continue to grow the sport at every level, from our grassroots series SHOBOX to crowning unified and undisputed champions across boxing’s deepest divisions. When you consider the competitive nature of these fights, the star power of fighters like Errol Spence, Jr., ‘Tank’ Davis, David Benavidez, the Charlo brothers—and the youthful vitality of Stephen Fulton, Jr., Jaron Ennis and Brandun Lee—it’s never been clearer that SHOWTIME is the destination for the most compelling fights and will be for years to come. This SHOWTIME Boxing lineup is hands down the most potent of any network or platform in 2022.”