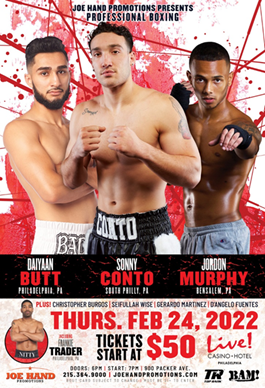 In his previous sold out fight at Live! in November 2021, Conto scored a third-round knockout in front of the loud supportive hometown crowd.

Marshall is a veteran of the sport making his debut in 2015 and is coming into enemy territory trying to bounce back from a tough loss on the Wilder vs Fury 3 undercard.

Another highlight on the card is lightweight Jordon Murphy (1-0, 1KO) of Bensalem, PA will be making his second professional appearance competing in a four round bout.

The card will also feature super featherweight Frankie Trader (13-2-1, 3KO’s) of Philadelphia, PA competing in a six round contest. Trader will look to continue to climb the ranks, as he has won 3 straight bouts since making his return from a four and a half year layoff and reuniting with his head trainer Aaron Ford.

Super lightweights Christopher Burgos (3-4-1, 1KO) of Philadelphia, PA will battle Phillip Davis (2-5-1) in a six round bout. Burgos won his last fight in an all-out war in a rematch against Gerardo Martinez and will look to build on that win to gain some momentum.

Rounding out the card will be Gerardo Martinez (5-2, 1KO) of Coatesville, PA going against Seifullah Jihad Wise (4-8, 1KO) of Philadelphia, PA in a six round bout.