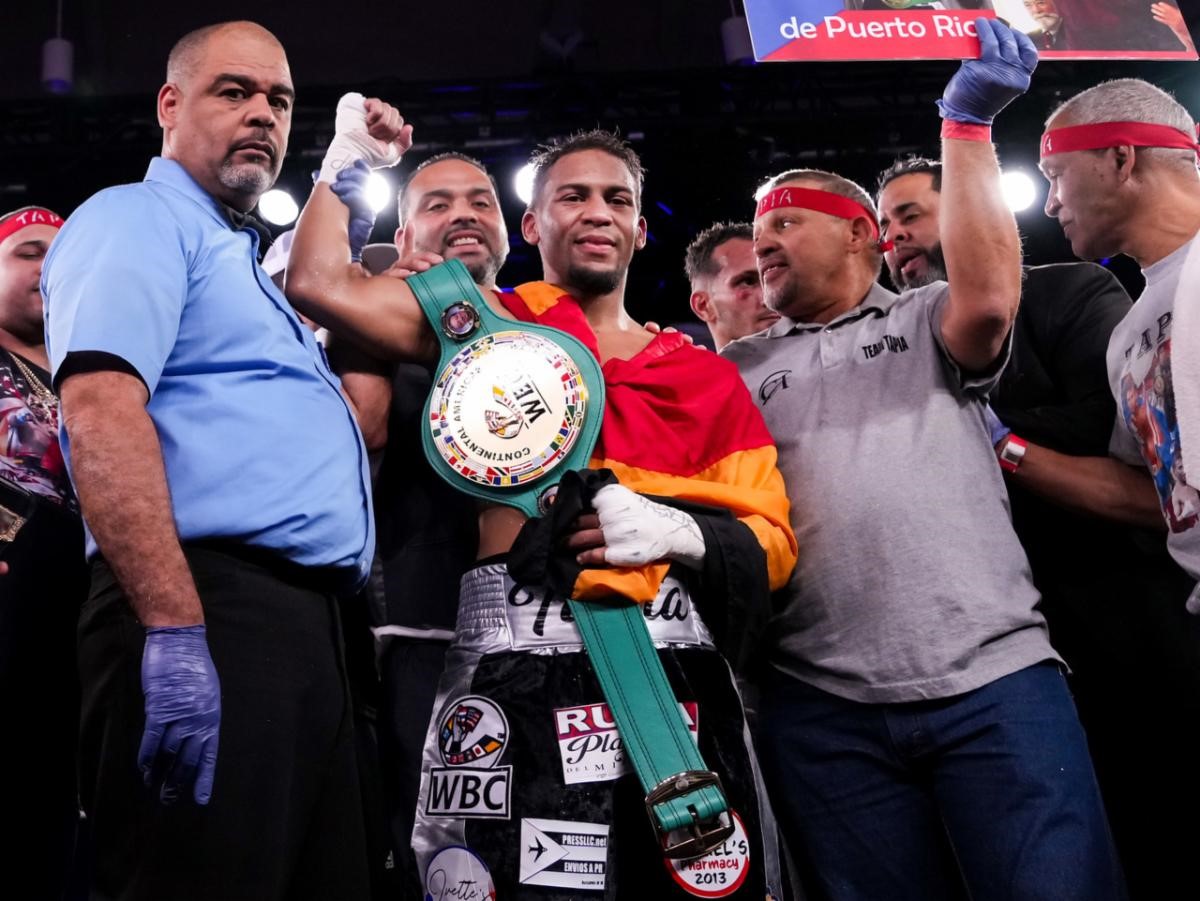 Philadelphia (March 14, 2022)--Christian Tapia outlasted Luis Lebron via a 10-round unanimous decision to capture the WBC Continental Super Featherweight title in a bout that exceeded the pre-fight hype that took place in front of a capacity crowd at Live! Event Center at Live! Casino Hotel Philadelphia.

The fight topped a terrific card that was promoted by Hard Hitting Promotions.

Early on, it looked like it was going to be Lebron’s night as he hurt Tapia badly as he landed a flush left hook to the side of the head. Tapia was rocked and held on for the balance of the frame. Tapia regained his composure and was able to start landing some nice overhand rights. Tapia started to get into a rhythm and was able to land left hooks to the body which started to slow Lebron down. Lebron would not go quietly into the night as he was able to force Tapia into some furious exchanges, which thrilled the sold-out crowd. Many of the rounds were close, and it was the accuracy and harder punch of Tapia that opened up a cut under the left eye of Lebron, which proved to be the difference of the fight as the Coamo, Puerto Rico native won by scores of 99-91, 98-92 and 97-93.

Tapia wins the WBC Continental Super Featherweight title and raises his record to 14-0. Lebron of San Juan, Puerto Rico is 18-3.

In the co-feature, Brandon Pizarro landed a hard left hook to the head of Vitor Jones Freitas that sent the Brazilian visitor down and out at 1:18 of round four of their scheduled eight-round welterweight bout.

Jan Carlos Rivera put on a solid boxing performance to win a six-round unanimous decision over Michael Ogundo in a welterweight clash.

Rivera of Philadelphia won by shutout tallies of 60-54 on all cards and is now 5-1. Ogundo of Quincy, Massachusetts is 16-14.

Villanueva drove Gutierrez into the ropes for a knockdown in the opening frame. Gutierrez fought back hard and the two had several good exchanges throughout the fight, but Villanueva was able to drop Gutierrez down in the final frame, and won by scores of 40-34 on all cards.

Villanueva of Allentown, PA is 1-0. Gutierrez of Emiale, Nicaragua is 0-1.

Derrick Vann was able to use an unorthodox style to register two knockdowns and take a four-round unanimous decision over previously undefeated Brendan O’Callaghan in a battle of Philadelphia based middleweights.

Cesar Espinel Maldonado landed a booming left hook that sent Anthony Ramirez down and out at 2:52 of round one of their scheduled four-round welterweight bout.

The left hook sent Ramirez down face-first thudding off the canvas. Somehow Ramirez got to his feet, but he was wobbling all over the place and the bout was stopped.

Espinel of Arecibo, Puerto Rico is 1-2 with one knockout. Ramirez of Philadelphia is 0-2.