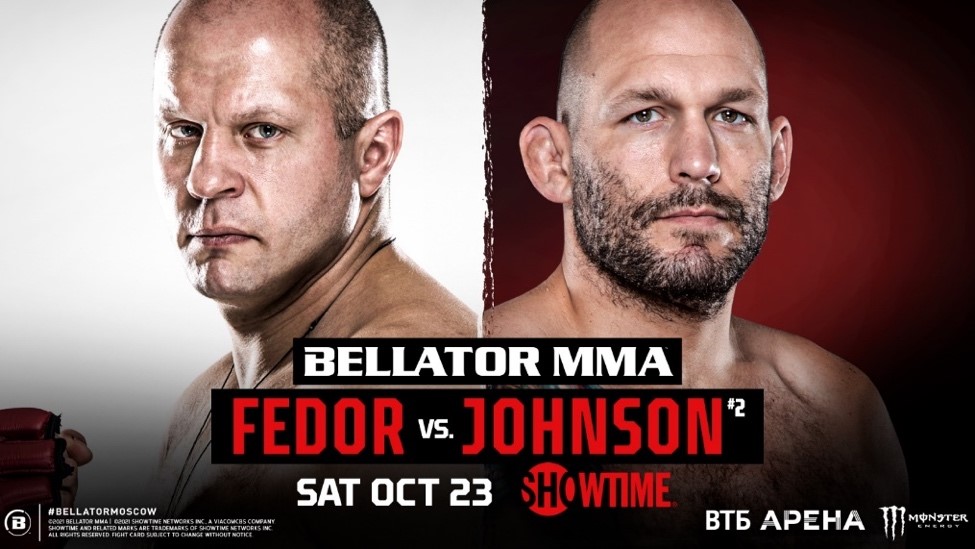 LOS ANGELES (Oct. 12, 2021) – Capping a historic month of exceptional BELLATOR MMA action,Russian heavyweight legend Fedor Emelianenko (39-6, 1 NC) will make his highly anticipated return to the cage following a nearly 22-month absence when he squares off against No. 2-ranked contender Tim Johnson (15-7) at BELLATOR MMA 269: Fedor vs. Johnson Saturday, Oct. 23, at 3 p.m. ET live on SHOWTIME. In the co-featured bout inside the VTB Arena in Moscow, Russia, former BELLATOR Heavyweight Champion Vitaly Minakov (22-1) will return to combat for the first time in more than two years when he faces No. 8-ranked Said Sowma (7-2).

Tickets for BELLATOR MMA 269: Fedor vs. Johnson are currently on sale at Kassir.ru.

Hailing from Belgorod Oblast, Russia, the 45-year-old Emelianenko is widely regarded as the greatest heavyweight in mixed martial arts history. Sporting first-round knockouts in three of his last four BELLATOR MMA contests, the former PRIDE heavyweight champion has shown no signs of winding down a celebrated career. In his most recent fight against Quinton “Rampage” Jacksonon Dec. 19, 2019, at BELLATOR MMA 237, Emelianenko once again proved that age is just a number when he dismantled the former UFC champion at 2:44 of the opening round.

Fighting out of Las Vegas, Nev., Johnson has defeated three of his last four opponents, including two by opening-round knockout. Prior to his interim title loss to Valentin Moldavsky at BELLATOR MMA 261, the Minnesota-born southpaw tore his way through the 265-pound division with victories over Cheick Kongo and Tyrell Fortune. The 36-year-old Johnson hopes to continue his ascent toward a heavyweight world title as he challenges an MMA icon fighting in front of his Russian compatriots for the first time in five years.

Rounding out the four-bout SHOWTIME telecast will be the previously mentioned co-main event between former Heavyweight World Champion Minakov and Sowma, Team Fedor’s Anatoly Tokov vs. Sharaf Davlatmurodovin a middleweight clash, and undefeated Russian phenom Usman Nurmagomedov (13-0) vs. Patrik Pietila (11-8). A previously scheduled bout between No. 8-ranked Andrey Koreshkov (24-4) vs. Rustam Khabilov (24-4) has been cancelled due to an undisclosed injury.

Sharing a lifelong dream of fighting together in front of friends and family, brothers Anatoly and Vladimir Tokov (6-1) will compete on the same card for the third time. The brothers are undefeated when competing at the same event with each having achieved victories at BELLATOR 218 and BELLATOR 229. With three of his six professional victories coming by way of stoppage, Vladimir will make his fourth consecutive BELLATOR MMA appearance in a lightweight scrap against the explosive Aymard Guih (15-11-1). Additionally, sibling middleweight brawler Anatoly Tokov (29-2), fresh off a pair of impressive finishes, is eager to put the 185-pound class on notice when he takes on hard-hitting Russian Sharaf Davlatmurodov (18-3-1).